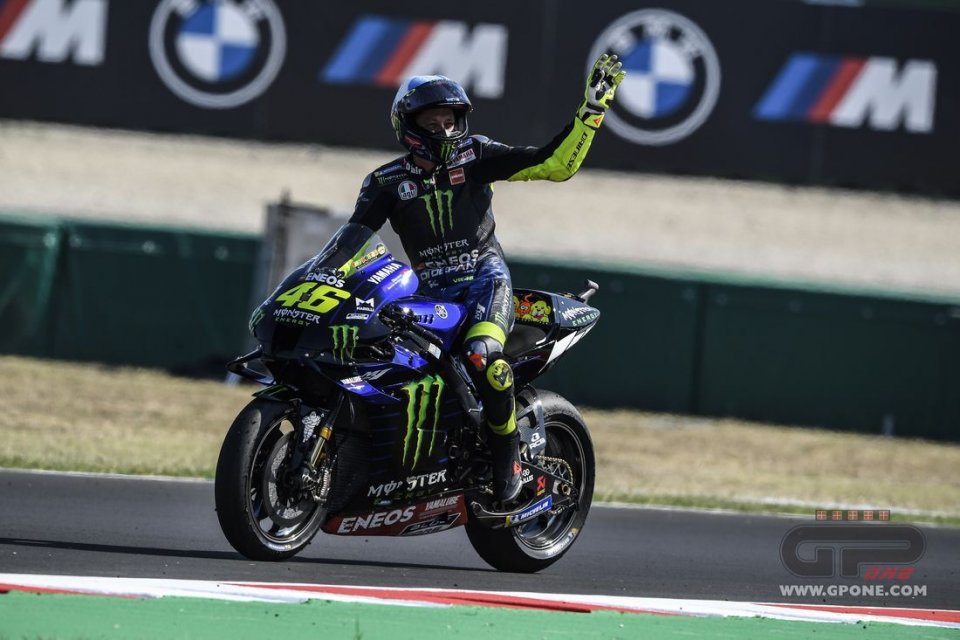 "A few times during the race, I thought: who the hell had this idea of ​​the Academy? I don't think it was such a good idea, if you look at what happened today. But it was me who had it" joked Valentino Rossi after just missing out on the podium at Misano. On the one hand, there is the satisfaction of seeing his proteges reach the top in MotoGP with Morbidelli's victory and Bagnaia's 2nd place, on the other hand the disappointment of not being up there with them…

Valentino, which side do the scales tip?

"At the moment, with the adrenaline of the race still, I'm happy because I did a good performance, I rode well. But it really bothers me not to be on the podium, at Misano it's always special and I would have loved to be up there with Franco and Pecco, it would have been like at the Ranch on Saturday night. I came close and I know I can still improve ”.

"On the one hand I am very, very happy, but on the other it is a great pity. Being on the podium with Morbidelli and Bagnaia would have been something incredible, historic, I didn't expect Mir to overtake me but he was very fast. I am very proud of our riders, during the Moto2 race it was difficult to keep my heart under control ”.

How does it feel in this dual role: rider and coach, so to speak?

"My mistake was thinking about the future too soon (laughs). I still race, I have fun, I am also quite competitive but I have bred some vipers in my bosom. However, it’s still a great satisfaction, I think it's a unique thing in sport. Soccer coaches come to mind, like Vialli, but here we are talking about the top of motorcycling. It would have been something historic to get on the podium all together, unfortunately the only one missing was me".

You have however created your heirs…

"There is satisfaction, even for all the people who work in this project. We are first and foremost enthusiasts and I think we have done something great for motorcycling. Too bad our riders have become so strong so quickly (laughs) ”.

It was also the first Grand Prix of the year with the public, albeit in a small number…

“It was a fantastic feeling to see the fans again, also because most of them were dressed in yellow. I hope we will be able to get back to normal as soon as possible because having the public in the stands changes so much ”.

Despite missing out on the podium you have made up points in the championship, are you thinking about the title?

“This championship is starting to get interesting, but if I want to win it I'll have to be faster. If I had finished 2nd today I would be only 10 points from the top, but we are all close. There is no clear favourite, everyone has problems or makes mistakes. Now in the lead is Dovizioso, who is in his most difficult season and does not know what he will do in the future, without a doubt it is a strange situation. I'm 18 points behind him, but there are a lot of races left and I'll try not to give up, anything could happen this year. "

Speaking of strange things, how do you explain Vinales' difficulties also in this race?

“Some things also depend on the DNA of each rider. Maverick is very strong on the flying lap, he often manages to set impressive times, that's his strong point. I, on the other hand, have always suffered in qualifying, throughout my career I have always been stronger in the race. But today the rear tyre made the difference, Vinales mounted the hard, I also thought I would make the same choice but then I changed my mind 10 minutes before the start. That was the key ”.

“Is the Honda difficult? All MotoGPs are. It depends on the rider. Tonight my head will work a lot, and tomorrow it’ll be better.”
5 hours 25 min ago

"We tried some small new things and I'm confident". Martin: "I have pain in my neck after yesterday's crash, but I'm happy with today's improvements"
19 hours 6 min ago