Andrea Dovizioso was operated on yesterday evening at the Policlinico di Modena following the injury suffered on Sunday afternoon during a motocross race on the Monte Coralli track, in the province of Faenza.

The Ducati Team rider, following a consultation with Professor Giuseppe Porcellini, decided to undergo an operation immediately to fix a plate to his injured collarbone and thus speed up recovery in view of the first MotoGP 2020 race in Jerez.

Having undergone successful surgery yesterday evening and after the positive outcome of the intervention, Dovizioso was already discharged this morning and can now begin the rehabilitation process with physiotherapy sessions starting this afternoon. The rider from Forlì, who will therefore be present at the Spanish Grand Prix on July 19, has declared himself confident that he will be able to get to the first round of Jerez in the best possible condition.

"The surgery went well, and I want to thank all the medical team that did the operation so quickly. I don't feel much pain, and that makes me very optimistic – declared Andrea Dovizioso - I came home this morning, and during the afternoon, I will plan my rehabilitation. I am confident that in these weeks I will be able to recover and that I will be in full shape in time for the first 2020 GP in Jerez."

Prof. Giuseppe Porcellini of the Policlinico di Modena commented thus on the operation: "Andrea Dovizioso underwent surgery to correct a displaced fracture of the sternal margin of the clavicle. We proceeded with the internal fixation of a plate with six screws with anatomic reduction and, from a mechanical point of view, we are delighted with the outcome of the operation. Apart from me, the medical team was composed by Prof. Fabio Catani, who personally supervised the operation, Prof. Luigi Tarallo and Doctor Andrea Giorgini. I want to thank the Direction of the Policlinico di Modena that made the operating room available in three hours, and all the staff who made possible to perform the surgery quickly".

Paolo Ciabatti, Ducati Corse Sporting Director, added: "Although we know that motocross is an activity that presents several risks, we had still allowed Andrea to participate in this regional race, because he had explained to us that he needed to rediscover those stimuli and sensations that only a real competition can give. On the other hand, motocross is also the discipline with which many of the MotoGP riders train regularly. So, in the end, we must be relieved that the injury did not have serious consequences and that Andrea will be able to be regularly at the start of the 2020 championship in Jerez". 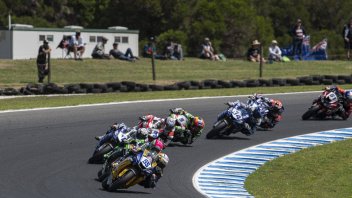