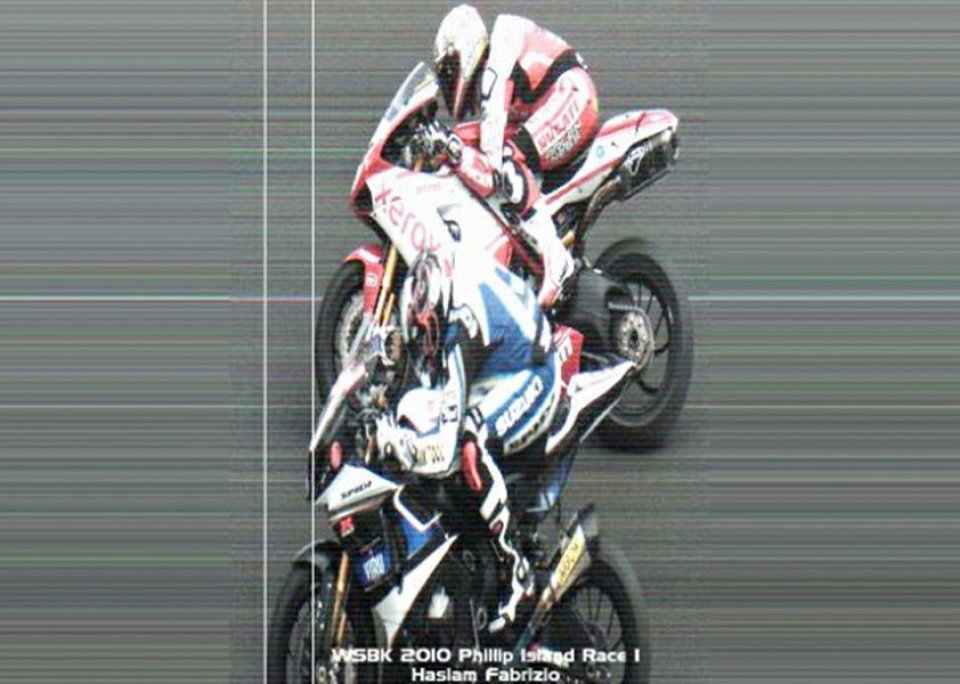 Our motorcycles are asleep in the garage, as are those of our favourite riders. We enthusiasts in this period would like to see MotoGP and SBK action on the track, but so far in 2020 we will have to have a little more patience. To help fans to get through this period faster, the WorldSBK website has made some videos of past races in the world championship free of charge and today we want to talk about Race 1 at Phillip Island in 2010.

In that race the gap between the first and the second classified was just 4 thousandths of a second. In particular, Leon Haslam managed to screw over Italian Michel Fabrizio right on the finish line. At this link you can see the complete race, but we thought it was a nice idea to have a chat with the man who was beaten by those 4 freakin’ thousandths, or Michel Fabrizio.

On the second step of the podium by 4 thousandths. You must have been pretty narked about that…

"The first words I said to my engineer when I arrived at parc fermé under the podium were 'What a jerk I was, not putting in the sixth'; I was so focused on getting tucked down in the fairing that I forgot to put in the sixth gear that would have given me the possibility of beating Leon. Basically, what screwed me over was the rev limiter in fifth gear, which stopped the bike a bit. I was so concentrated on tucking myself into the fairing that I was screwed over".

But you didn't realize immediately that you had lost…

"The nice thing is that on the three big screens that were along the track there were images from the pits, and Leon and I looked at each other, trying to understand who had won. I was looking at a screen and my wife was there celebrating. Then there was the Suzuki team who were cheering, we didn't understand anything. When we got under the podium, there was a mockery of the win."

When the first results were published, you were declared the winner. Can you explain what happened?

"I had won according to the official timing because I had the transponder mounted on the bike ahead of him. Only by looking at the photo finish, and damn the person who invented it, he was the winner. The transponder on my bike was mounted in the front area of ​​the bike, while on the Suzuki it was mounted in the tail. I thought I had won it by a few thousandths, but I actually lost it by 4 thousandths ".

Everyone remembers the finale, but the whole race was actually very hard fought.

"The whole race was really good; Leon was always deadly on the brakes so passing him was really a mess. The only point to pass was the straight because I came out much stronger than him from the last corner. I thought I had prepared for this, but I didn't put in sixth gear, so I hadn’t prepared an effin’ thing at the end of the day! ".

Now that you have stopped being a full-time racer, what do you do?

"Now I manage a circuit in Civitavecchia, I rent out Ohvales for customers. It is normal that when they know who I am, they ask me for advice and tips and I always try to give it to them. Since the start of this year, I’ve also gone back to being team manager in CIV Junior with the Ohvales and an Aprilia challenge. I have kids to manage, two nine years old and two twelve years old. I like the idea of ​​being able to launch young people, I preferred to start again from these categories because the pilots are very immature, and you can transmit something to them more than the slightly older riders. It's like dealing with a blank canvas, while when you are dealing with the riders who are already at CIV level, they think they have already arrived while in reality they still have a long way to go. It's nice to be dealing with kids who listen to you and grow up. "

Speaking of SBK, what impressions did you have after the first race at Phillip Island?

"In this first round of 2020 I saw the true Superbike, very hard-fought races. Above all race 2 was really great. But I always say that Phillip Island is a track apart, there are many questions to be answered. You are on the other side of the world, it is the first race, some riders do not arrive well prepared so there are many factors to consider. It would be nice to find such a hard-fought Superbike when they get to Europe. I am happy that Redding has arrived, because he seems to me an old-style SBK rider. We’re going to see a lot of battles between Scott, Rea and even Razgatlioglu".

How did you see the Honda? Haslam did not go badly at all.

"In my opinion we didn’t see the true Honda there, because Haslam has always been very good on that track. I remember that when he was with BMW, he made the podium a few days after surgery on a fractured ankle, so it doesn't really count. Now for sure Honda will be able to work a bit more because of this forced stop, but you must always wait to see how things will go on a European track. In my opinion the championship has always started in Europe, only there can you see the true values ​​on the track ".