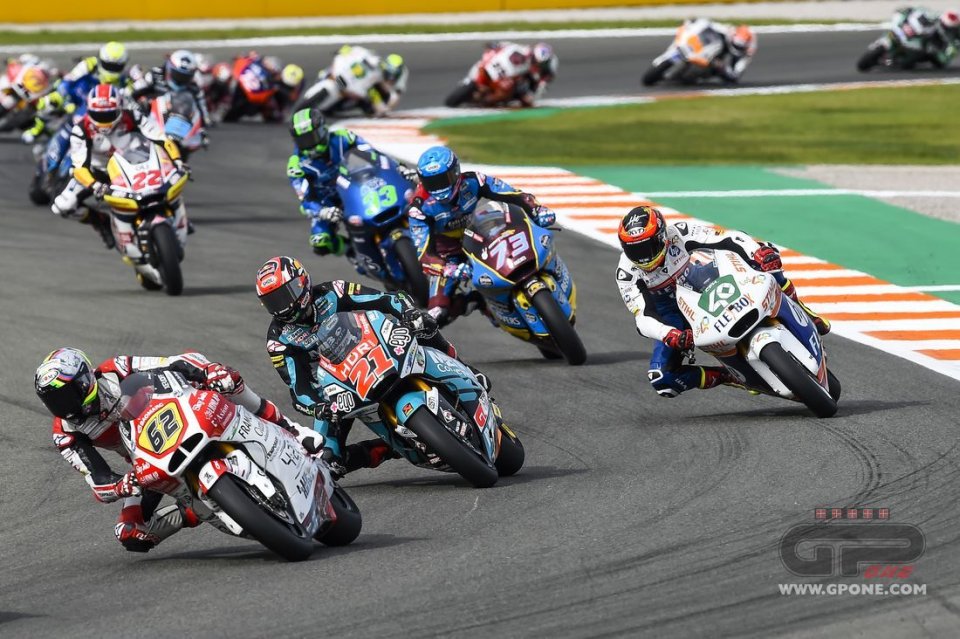 The Moto2 and Moto3 thrones are both vacant. Alex Marquez has moved into MotoGP and Lorenzo Dalla Porta into the intermediate class and the group of riders who want to inherit the #1 is as numerous and fierce as usual. The first chance to see them face off against each other will be tomorrow at Jerez, when the first three days of official tests will begin. The riders of the two classes will take turns on the track from 10 am to 18 until Friday.

If we scroll through last year’s classification in Moto2, the favourite appears to be Tom Luthi. The Swiss rider is an old acquaintance of the world championship, in the intermediate class he has always placed in the top positions and he was runner-up in 2016 and 2017. This does not mean that he will have an easy life however and one of his most dangerous rivals is Jorge Navarro, who last year found his right place on the Speed ​​Up. If we remain in Luca Boscoscuro's garage, Fabio Di Giannantonio, who picked up the title of rookie of the year, will also want a piece of the action and he won’t be the only Italian either.

After taking some time to adapt to the new tyres, Luca Marini finally found a competitive level at the end of last season, and he became one of the protagonists of the category. On the other hand, Lorenzo Baldassarri went in the opposite direction, and after a practically perfect start lost his way during the season. Consistency was also the problem of his teammate Augusto Fernandez, who by right must be considered one of the candidates for the title.

Many others, however, want to join this group. Starting with Jorge Martin, Moto3 world champion in 2018, and an undisputed talent, who this year switches from KTM (who retired from Moto2) to Kalex and remains in the Ajo team. Enea Bastianini, Nicolò Bulega and Marco Bezzecchi are also called upon to make a leap in quality. The three Italians, for various reasons, were unable to show their best potential last year; Nicolò and Marco have changed teams (joining the Gresini and Sky teams respectively) while Enea will continue with Italtrans.

All eyes will also be on MV Agusta which unveiled its F2 a few days ago. The aim is to start over from the fourth place by Manzi at Jerez and the experience of Corsi will help develop the new bike. There is also a lot of interest in the category rookies, starting with Lorenzo Dalla Porta and Aron Canet, who fought for the title in Moto3 last year. From CEV, however, come Edgar Pons, the reigning champion, and Hector Garzo. Hafizh Syahrin also arrives directly from MotoGP and the Malaysian will race with the colours of the Aspar team. Finally, let’s remember that Sam Lowes, injured in training, will not take part in these tests.

In Moto3, the favourites for the win are Marcos Ramirez and Tony Arbolino. Last year the two riders fought it out for third place in the championship (which went to the Spaniard) and showed that they were only lacking in a bit of experience to aim even higher. Other riders to watch are Jaume Masia, who has moved to the Leopard world champion team, and John McPhee, a veteran of the cadet class.

As always, in Moto3 predicting the winner is almost impossible and on paper there are many candidates who could turn out to be winners. These include Celestino Vietti, rookie of the year in 2019 and one of the most interesting young talents. The Squadra Corse SIC58 pairing made up of Niccolò Antonelli and Tatsuki Suzuki, who last year both showed considerable speed, have one year’s more experience and will finally want to fight for the title,

There are some other riders with a great desire for redemption, starting with Gabri Rodrigo, who in 2019 saw his season compromised by a number of injuries. Dennis Foggia also wants to show his potential, now part of the Leopard team after leaving SKY, where Andrea Migno has returned, preparing to face a decisive season for his career. The same can be said of Romano Fenati who, with the colours of the Max Racing Team, will bring the Husqvarna name onto the track (a re-branded KTM as had happened in the past).

There is also a lot of meat on the barbecue, so to speak, and starting from tomorrow the only thing that counts will be the stopwatch.