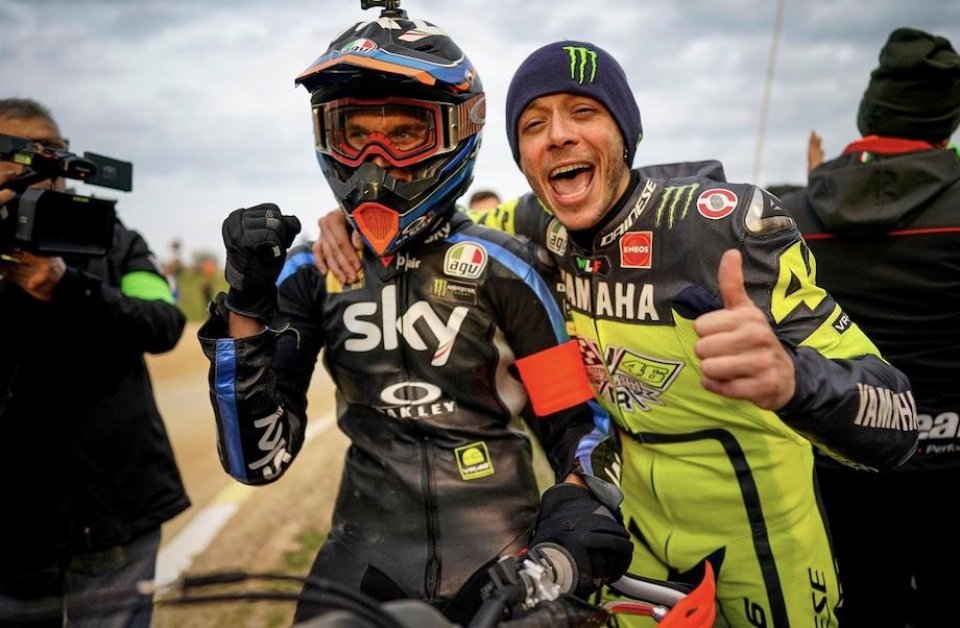 Directly from the Ranch in Tavullia, at the presentation of the Sky Racing Team VR46 we have heard what everyone has had to say about the big news of the past couple of days: Fabio Quartararo in official Yamaha colours in place of Valentino Rossi in 2021-2022. One of the most important voices however is certainly that of Luca Marini, the Doctor's brother.

Luca, did you get a chance to see Vale these days?

"We haven't seen each other because we’re training at different times and we have a lot of commitments."

Did you expect these decisions from Yamaha?

“I was surprised at the renewal of Vinales because it was right to promote Quartararo into the official team after the great season he did and if I had been Yamaha, I would have done the same thing. All of this is a shame for Vale because he had simply asked to wait a few more races, but without a market window the teams have to make quick decisions."

Is that bad, in your opinion?

“Absolutely, the problem with not having a market window is that all the deals are done now. The organizers should find a way to protect riders and teams in order to help them make decisions with the right amount of time and at the right time of the season".

You are also included amidst all this speculation about the 2021-2022 two-year period as a candidate for your brother's teammate in Petronas. Will we see another ‘family’ team?

“Get Valentino to continue and we'll see. However, I think it's a fairly impossible scenario."

For what reason? Even Uccio said that you are ready for the top-class.

“I'm happy if that’s what Uccio thinks. It's true, this bike resembles a bit more a MotoGP bike and I'm happy with the change in the Triumph engine which prepares us more for the jump into the premier class but Petronas already have Morbidelli and he's doing well, so they can’t really fire him."

In addition to ‘Morbido’, another interloper could be Jorge Lorenzo, who has signed for 2020 as a Yamaha tester.

"Yamaha have made a great acquisition with Jorge because if he wants to take on new challenges, he is a rider who can certainly help as a tester."

Going back to the present, today you presented the new livery and team line-up. What do you expect from this start of the season?

“I hope to start again in the best possible way. The most important thing now is to get to know the new team and the new data technician and establish a good relationship. There are a lot of changes on the bike and so we have to understand what’s good and what’s not."

Qatar is near, how would you like to arrive there?

“I would like to get to the first Grand Prix with clear ideas. I know I can improve even more and this year I have to take that step forward."

In 2019 your injury meant you had a slow start to the season. This year?

"This year the winter was a bit easier, with just overall training unlike last year when I concentrated only on the shoulder. Last season was difficult because it took almost a year for me to feel 100% fit."

Then this year Alex Marquez won’t be there...

"Yes, but I must say that I am a bit disappointed because it is always nice to compete against him. He is a rider who pays a lot of attention to details and in the battles on the track he is aggressive but respectful. I had some good fun with him. This year he’s joining a great team, all journalists say it’s a risk, but in my opinion, there is nothing better than going to a factory team".

Many observers, as I mentioned before, think that you are ready for MotoGP, but do you think you need the Moto2 world champion title before going to the top class?

"The most striking example is Quartararo. He won two Moto2 races, went to MotoGP and fought with Marquez every weekend. It’s not necessary to win the world championship, it is the goal of every rider, but the important thing is to stay focussed on the current season because if you go well then people will notice".