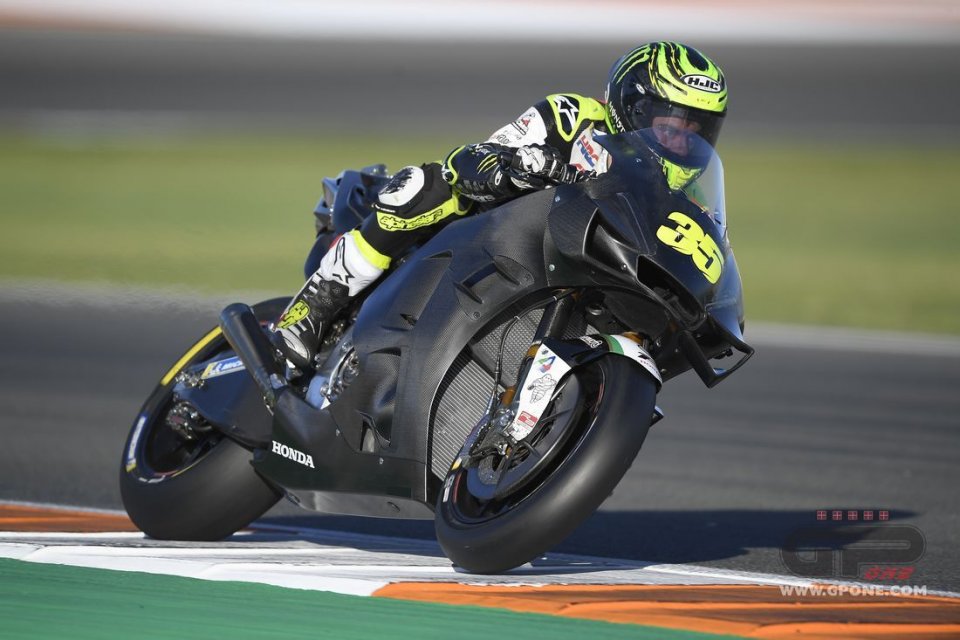 Cal Crutchlow ended a very positive two-day test, experimenting with the innovations Honda brought to Valencia and giving Marc Marquez a hand in the development of a bike that remains difficult to interpret. With the arrival of a rookie like Alex Marquez in HRC, and without Nakagami, it's clear that the decisions for development have been completely entrusted to Cal and Marc. But, at the end of this first 2020 session, the British rider isn't really happy.

Lucio Cecchinello's rider is known for not being exactly calm and politically correct, which he also confirmed in Valencia. With Alex Marquez in HRC, something that Cal himself never denied he wanted, there was also a great change in technical support. In fact, Honda literally went shopping for technicians in LCR, bringing along with it three key figures with whom Crutchlow worked this season, just for Alex. A passage that Crutchlow did not like at all.

"It might seem ironic, but I don't know exactly how much my team will change for 2020. I  doknow that something will surely change. Like I said," Crutchlow emphasized, "Honda took some of my guys away from me and, I have to say, from my perspective, I'm the only one able to get on the podium with Marc. That was the case this year, last year, and the one before. And it'll probably be like that next year, as well. I've always been the closest to Marc, and I've always thought that Honda would help me get even closer."

"They took some of my guys from the garage, and that annoyed me a lot. Also because I don't think that this can make a big difference for Alex, while it does for me. They are guys he got from my team and took them to the official Honda. Three technicians."

Actually, it wasn't really a theft, like Lucio Cecchinello explained.

"When Lorenzo arrived in Honda, at the end of last year, HRC asked me beforehand if he could make an offer to my staff, and since I don't own people, actually, I'm happy to see them grow, I didn't stand in his way," Lucio specified. "Now, of course, the situation is different. There's no longer a five-time world champion, but a rookie, and we thought it wouldn't hurt having them back. If not all, one or two. No decisions have been made at this time. We'll see."

Crutchlow: "It won't make a difference for Alex to have these technicians on the team, it does for me."

In Valencia, Alex was still Cal's neighbor in the garage. Did you get a chance to take a look at his work?

"I didn't look at what Alex did. I wasn't interested," the British rider answered. "He had a completely different work program than mine. I'm sure he did a good job. He's been riding the bike for two days and had fun. I didn't care about it too much, honestly."

But are you satisfied with what you tested on the track?

"We were faster today than yesterday, but it's normal because we had a lot more information and this allowed us to improve. I'm satisfied. There was one long phase of the day when nobody was pushing hard today, especially this morning, because no one wanted to fall and risk throwing the rest of the day away. They're tests. It's important not to race too long. We tried some new electronics, both yesterday and today."

Did you reach all your objectives?

"When you start these tests, you always hope to be able to be faster than you were during the race weekend, and I succeeded today. It was important because we were often faster in the race this year than we were in free practice or qualifications. It was one of our weaknesses. I think we've improved."

What do you think about the potential of the new bike?

"We have to work to understand how to really make the new bike more efficient because there are areas where it's objectively faster, but it also has some weaker points. Now we should work on the basis of the information gathered here, in view of the next two days of testing in Jerez. In my opinion, we'll have to look carefully at the aspects concerning electronics. We undoubtedly have made progress in some areas, which puts me in a good mood. I recovered some confidence on the bike but, as you know, we wanted to try to make it easier to ride, and this one isn't. We still have to improve in this respect during the winter. I think they can work on this."

Crutchlow: "We wanted an easier Honda and this isn't"

In terms of timing, do you think it's a step forward?

"I almost never tried my bike during these two days, the bike I used in the race. I only did at the end, and I'm pretty sure I could have gone even faster, but these tests are necessary for collecting data with the new bike. I also had a minor accident, which was entirely my fault. Fortunately, it didn't do too much damage, also because I was on the new prototype. Speaking of new, I don't think it's easier any longer, but I also think that we can improve, thanks to the work on the set-up. I think the opportunity with this bike is greater than with the previous one, and this will help make it easier. But I don't think it's that big step forward we need, yet. We'll see if we can reach this during the next tests. We still have to sit at a table with the engineers and make a real plan to this regard."

How do you see this as a step forward?

"I feel a bit better with the front end of the new bike, not as much as I would have liked, and maybe even less than I would have expected. But the important thing is that this was the first test, the first step in the right direction. Honestly, I didn't work much on the bike set-up. I had to test new parts. When you try out new components, you can't change the bike's set up because otherwise you risk confusing the feedback. The bike remains what it is, you choose a base. Then you mount the new pieces and get on the track. Everything remains the same. I think that by working on the new bike, we could have taken other steps forward. I think we did a good job, but I still have to understand how much easier it really is."

And what about you? You talked about the possibility of getting surgery at the end of the year to solve the problems with your legs, which you've had since that accident at Phillip Island at the end of 2018.

"There have been many discussions about my need for surgery again. I didn't want to risk missing the winter tests because I know that surgery would involve a long period of rehabilitation. If I had to decide based on the pain I felt today, I have to say that it wasn't much, but only two days ago it was terrible. Surgery would also be risky because it's an area close to the nerves. I'll stop for now. I usually start training from early December, and I have a program of about 100 hours of training for December and another 100 for January. I think I'll at least wait a week before starting this time. But it depends a lot on how I'll feel. I'll evaluate what I have to do later on."