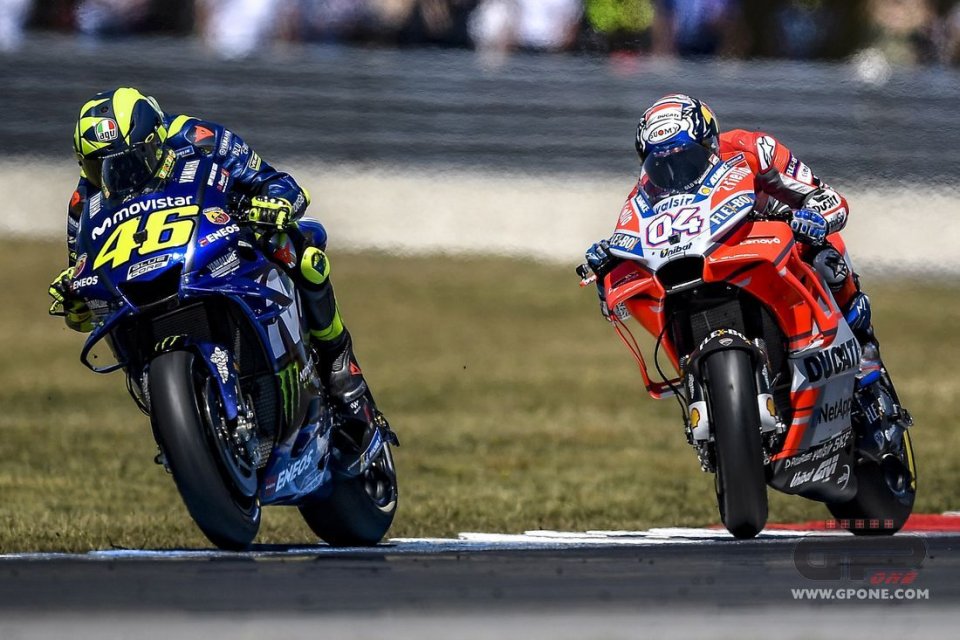 When a race becomes an uninterrupted series of passes, Valentino will surely shine. This is exactly what happened at Assen, where he ran rings around his rivals. “It definitely wasn't a dull race-  laughs the Doctor - I was really happy to be there, the only thing I'm sorry about is that I didn't reach the podium, I had the potential to do so”.

He's not lying, but the key moment was when Dovizioso passed him two laps from the end. Both braking at the limit, Rossi came off worse, running off track

“We were battling it out, I passed Andrea at the last chicane but he exited better and tried at the first turn. A braking point where I felt strong, we both came off the brakes a couple of times, and in the end he practically pushed me out”.

You think the move was too aggressive?
“It was an aggressive move, but like another thirty odd throughout the race, that's ok. It wasn't a smart move from a strategic standpoint though, as without it we both could have been on the podium, instead we're 4th and 5th°”.

You also came into contact with Lorenzo…
“We touched at more than 200 Km/h and we were lucky not to crash. At turn 12, the Jorge's Ducati locked and I hit him. It went work, in fact maybe I even helped him get the bike back up by touching him (he laughs)”.

How would you describe the race?
“Considering my twenty years of experience, I can't recall many races like this, at least not in MotoGP. It's hard to make the difference at Assen, like Phillip Island, and this leads to the formation of groups. You fight like it's a 125 race. When you're there you know everyone's enjoying it, but it's not relaxing that's for sure”.

How did you get on?
“Everyone was excited and aggressive, it wasn't easy to ride well. I chose the soft tyre at the rear, so I was careful not to overly consume it, but I had good pace. I had a clear track a couple of times, with a small gap that I was able to make up each time”.

So a positive weekend overall?
“As I've said, I was pleased to fight in that group but I'm disappointed not to have reached the podium”.

Another negative is that the Yamaha hasn't won for 18 races…
“Vinales and I have been quite strong in recent races, we've reached the podium, but we haven't won for ages. I've already said it, our rivals have taken a step forward with the electronics and we have not. The M1 is still a great bike to ride, very stable in braking, but I hope they are continuing to work in Japan. If we are able to improve, we can fight for the wins in the last part of the season, but it won't be easy”.

Marquez is getting away in terms of the standings, with a 41-point advantage now.
“Marc was once again the fastest today and he broke away from the pack. I think there'll be a good fight between 3 or 4 riders for second place in the championship, we'll see if we can improve our bike. This is a track where the M1 goes well, but we're still in difficulty”.