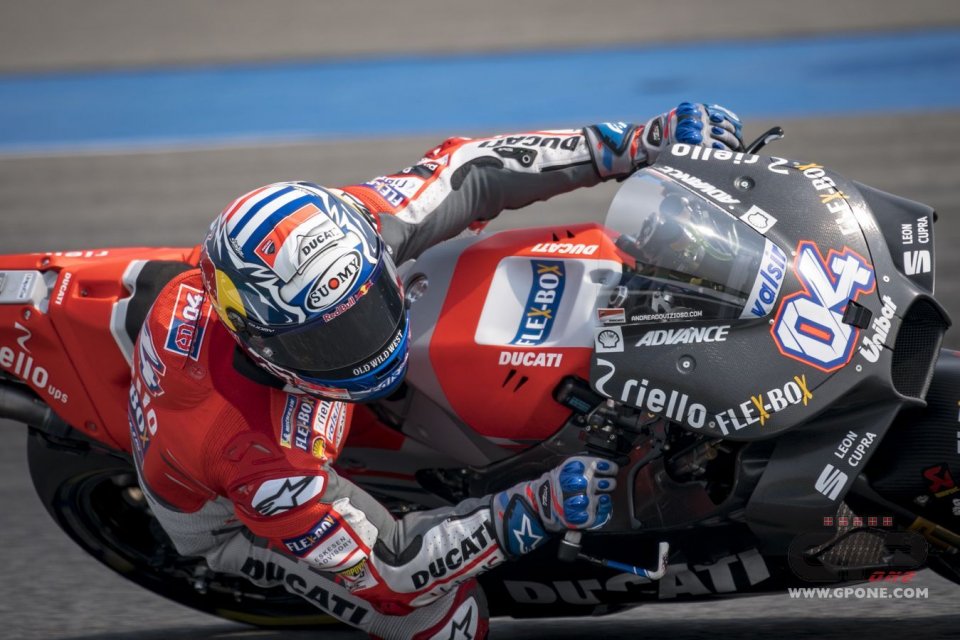 The Buriram exams were passed with honours by Andrea Dovizioso, who leaves Thailand with a smile on his face. While Lorenzo is still searching for the straight and narrow, the Italian is smiling from ear to ear because his expectations were met in full. In fact, the fairing and the frame convinced the Borgo Panigale standard-bearer.

“I’d give myself an 8.5 for the way this test went – the Italian began – We were able to be fast throughout the three days, so I am very happy with all the material we tested. Obviously, I do not want to let my guard down – he continued – As you have seen, there are a lot of fast bikes. As I said, I am enthusiastic about having confirmed the progress of the GP18 here.”

“I must say that I feel a different sensation on the handlebar which is not easy to describe – he admitted – It is obviously a positive sensation that leaves me with a lot of confidence.”

One thing is certain: this Ducati is the best bike ever.

“I would say so – he conceded – Now we have a base that works and it allows us to be competitive on every track. Today I was once again able to be fast with a soft tyre on the rear.”

The question about Lorenzo astride the GP17 was only natural.

“These are particular and personal situations –Andrea explained – I wouldn’t know what advice to give Jorge since we all have our own style and therefore follow our own path. Decisions should definitely be taken when you are doing well and have peace of mind. Plus, we still have Qatar and I’m sure that in Losail we will see him up with the leaders.”

While the Majorcan was called on to make comparisons, the Italian is carefree.

“For me, there is no more need to compare the two bikes – he pointed out – From Sepang, I used the new one and I’ll keep going with that one.”

His Ducati flies, but the competition is still a threat.

“Obviously, there is a lot of confidence, but at the same time, the other rivals are not standing by watching. During the tests this winter, Marquez proved to be competitive straight away, as did Pedrosa. Zarco is also in there, demonstrating a lot of growth with Yamaha and with another year of experience. That said, I don’t want to forget about Rossi and Viñales either since I expect them to be battling with the best.”

Now his thoughts have turned toward the Qatar tests.

“As we all know, it is a different track where Ducati has always done well, so we will try to continue down our path of growth and confirm our progress.”

With the season opener just a month away, a touch of pressure is normal.

“That is always there, but I look at it as something positive, because when you are battling for the top spots, it has to be there. Personally, I cannot be anything but happy about finding myself in this situation.”