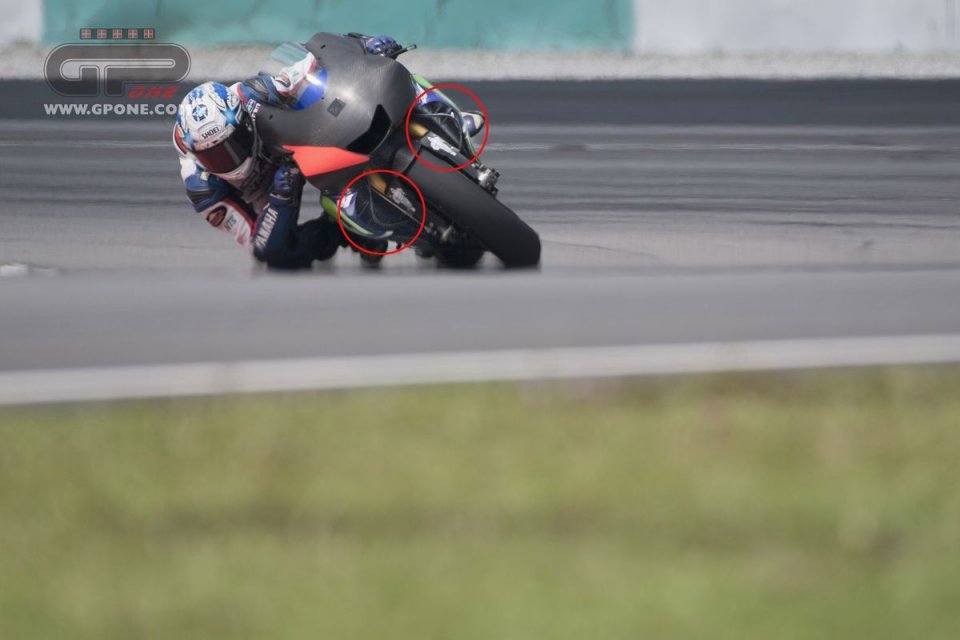 As soon as we arrived in Sepang, we wondered which manufacturer would be the first to show their hand in terms of aerodynamics. Now we have the name: it was Yamaha who, on Monday afternoon, stealthily sent their young test rider, Kohta Nozane onto the track.

What drew our attention was the carbon black fairing with a red arrow on the top right but with the side panels uncharacteristically bearing the Movistar colours. A sign that the solution is ready to move over to the M1 machines ridden by Valentino Rossi and Maverick Viñales.

The 21 year-old took several laps - his best time of the day was 2’02”187 - and then he returned to pit lane.
These were the first experimental runs for the Yamaha M1 WITH DOUBLE FAIRINGS.

In fact, as you can see from the front view photo, the side panels cover an internal channel consisting of several levels that serves to create downforce inside the fairing. The same downforce that the famous winglets provided.

Obviously, to quote Kouichi Tsuji, the number one man for the Iwata-based manufacturer’s Racing Department “It will not be possible to achieve the same values.”

How much will it cost to study the air flows in the wind tunnel? And above all, how much will be lost with the Cz increase and the Cx deficiency on the straight?

Kohta Nozane was the 2013 All Japan Champion in J-GP2. He currently races an R1 in GP1000. He has also ridden in four Moto2 world championship races, one in 2012 with team SAG and in 2013 he rode to races in the championship with Gianluca Montiron’s team JiR and one with team Norick.

Obviously, the solution must be screened by Danny Aldridge, Dorna Technical Director, as required by the (rather confusing) regulations in order to prevent any trickery.

But is this trickery? We do not think so. It is called, evolution, development. It cannot be stopped if they want to have prototypes racing.

For the record, all the manufacturers are working intensely in the wind tunnel to try and find the best possible solution - the one that will let them recover the most load.

We will no longer see external spoilers, but complex internal channelling. Will they improve safety? On an object like a bike, with a thousand protrusions, footpegs, levers, lever guards, etc., we doubt it. But for the purists, perhaps the bikes will look nicer this way. We expect to see them soon on factory models. After all, how many compact cars do we see on the road today with bodies that apparently stem from complex aerodynamic studies?