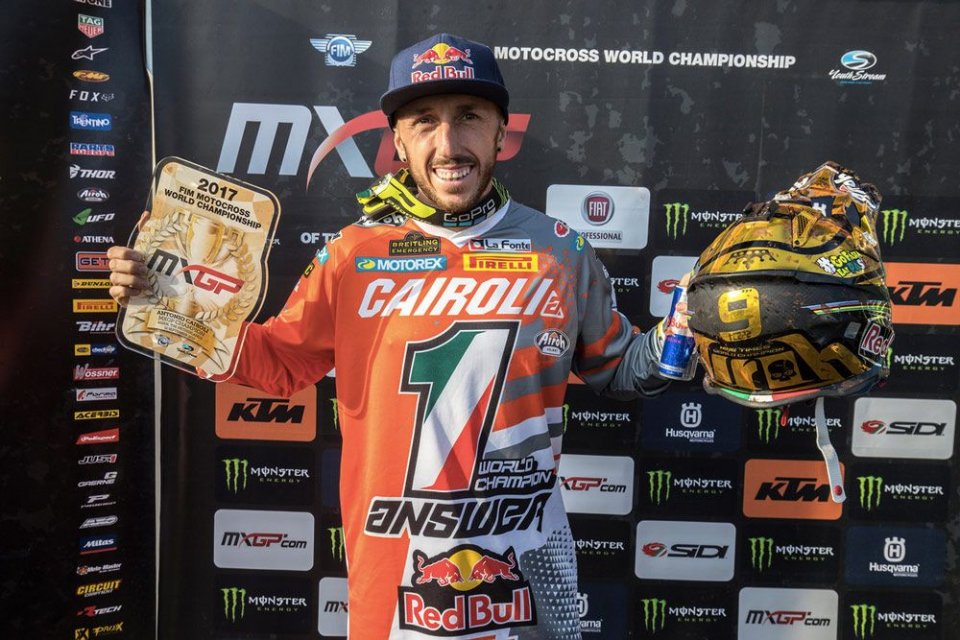 Tony Cairoli has received a very special and unexpected gift on winning his 9th world title. Red Bull big boss Dietrich Mateschitz was in attendance at Assen and immediately went to congratulate the Italian, taking him a gift: the steering wheel of the Red Bull Formula 1 car.

Cairoli is a real car enthusiast and was already thinking about where to put the precious prize in his home. Mateschitz surprised him though, adding: "you don't get to keep it, you get to bring it with you when you come to test our car”.

The gift is therefore a test drive of Ricciardo and Verstappen's Formula 1 car, though details as to time and place are still to be worked out. Tony couldn't have been any happier and has already asked the Pirelli guys to get hold of the 'right' tyres for the occasion.

Cairoli will therefore enter the small club of motorcyclists who've had chance to get behind the wheel of a Formula 1 single-seater. Valentino Rossi has done it of course, driving the Ferrari, as did Max Biaggi in 1999, who also tested the Midland-Toyota 7 years later. In 1998 Mick Doohan had chance to drive the Williams, while a few years before Sheene, Lucchinelli and Uncini shared a Brabham at Paul Ricard. The latest rider to get behind the wheel of an F1 was Jorge Lorenzo last year at Silverstone, where he drove the Mercedes.

Tony will experience the thrill of four-wheels after having ridden a MotoGP bike back in 2007, Valentino Rossi's Yamaha M1 to be precise.

The Sicilian rider is a real speed demon and will also be out on four-wheels in November, when he's set to take part in the South African Rallycross event. What with title celebrations, marriage and racing, there never seems to be enough time for Tony.