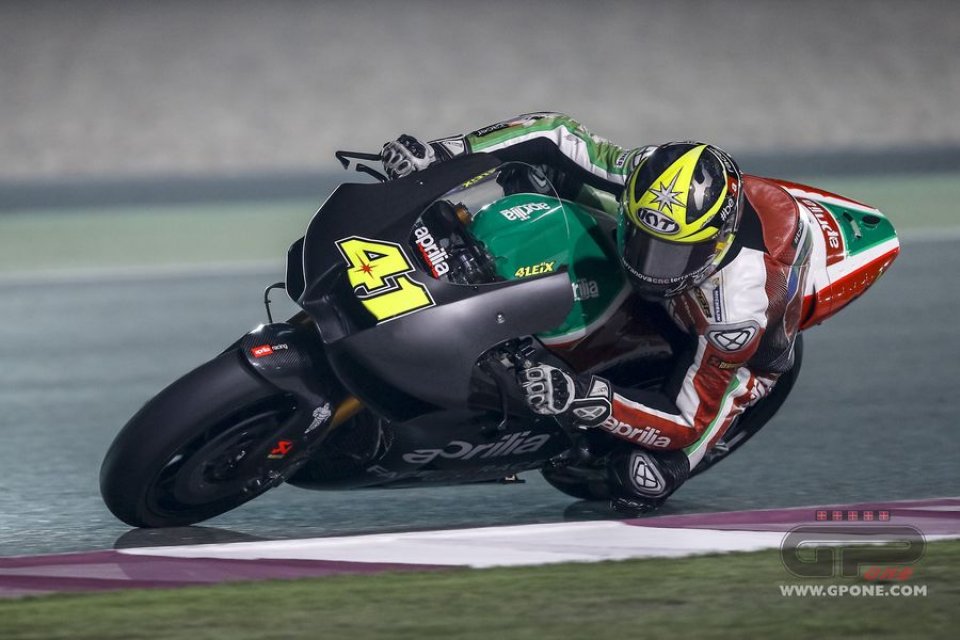 At Losail the new Aprilia RS-GP 2017 has confirmed the growth already seen at Sepang and Phillip Island. Aleix Espargaró has moved closer to the front, particularly on day two when he was closed fifth, just 0.066 from the fastest time.

On the final day, the Spaniard was slowed down by two crashes. Particularly the first, which came as Aleix was making his fastest lap after having improved in T1 and setting the best time through T2. The second crash forced him to change bike, thus preventing him further lowering his time.

Aleix, who also tested the new fairing brought by Aprilia during two long runs, focused on race pace, confirming the positive sensations he's had ever since he first got on the 2017 bike. His best times remains the l’1’55.121 set on Saturday, which translates into final twelfth position in the combined three-day standings.

Sam Lowes also suffered two crashes, but was able to improve in each and every session. An encouraging sign.

“Even if today wasn't the best of the three days, I'm pleased with our work – explained Espargarò - I started out with good sensations, managing to be fast even with the used tyres. Perhaps as a result of these good sensations, I pushed a little too hard with the soft tyre, crashing while I was on a fast lap. The bike was quickly repaired but a second crashed forced me to use the other RS-GP, with a less developed engine and electronics that were not perfect. This meant I couldn't improve in the second part of the session but I see the glass half full - in terms of pace, we've grown, our level is definitely better than what we see on the timesheets”.

“It might seem strange but at the end of this last day, when I crashed, we found the right change to the set-up of the RS-GP 2017 to increase my confidence – revealed Lowes - Our tests have been strange, we have a lot to try and this sometimes prevents me from focusing on race performance. It's part  of my growth path, right now sensations on the bike are more important than lap times and I've also learned a lot from less positive situations. I'm optimistic as we look to the race, the work done at the front of the bike has given me the confidence I was lacking and now the points zone, the aim I've set myself for race one, seems to be within reach. We will build our first weekend around the bike that we've found today - a good starting point”.

Bastianini: "I was sucked in by Aleix’s Aprilia and fell"

The Soft front will be a good solution for the less aggressive riders who need good feedback and high grip levels at maximum lean angle. The Hard...
2 days 22 hours ago

“I don't know when he'll be back. When he feels ready, he’ll come back, not before. Then he’ll have to work on his muscles, see if his shoulder is...
3 days 9 hours ago

"In the morning I was closer, but in the afternoon Fabio made another step, or rather a ‘big step’ in braking. And I was already at the limit. That’s...
3 days 12 hours ago

From the day he was born into a racing family on February 16, 1979, Valentino Rossi seemed destined for racing greatness. In this richly illustrated...
3 days 17 hours ago