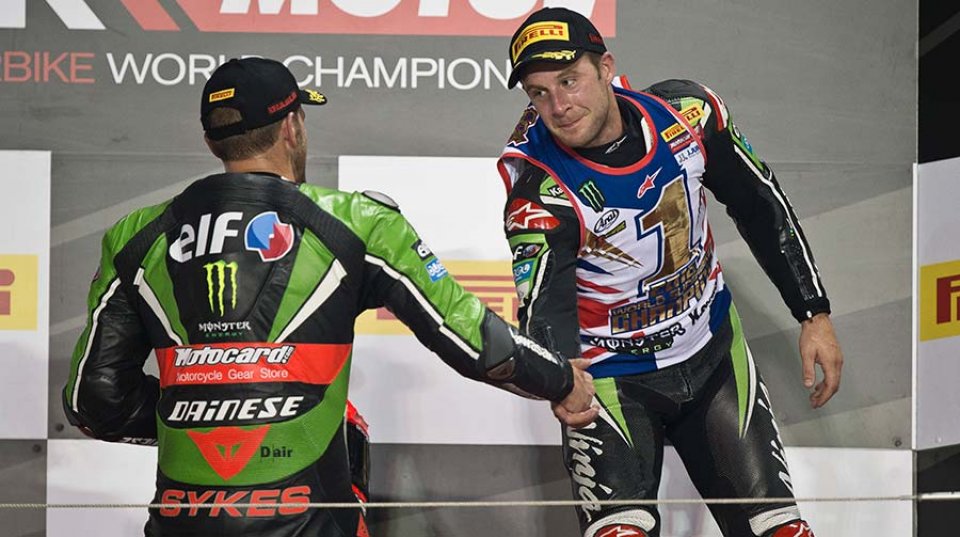 As the championship concludes, the Kawasaki pair enjoys some well-deserved rest, after a season in which the two riders rode their factory ZX10R bikes to first and second place in the final standings, bringing home both the rider's and manufacturer's titles. After the final race in Qatar, the disagreements between Rea and Sykes seem to have set aside.

The Northern Irish rider now holds two SBK titles and joins the likes of Fred Merkel, Doug Polen, Troy Corser, Colin Edwards, James Toseland and Max Biaggi. Only Fogarty and Bayliss have done better: “I'm pleased because we've achieved the goal that we set ourselves - comments Rea - it has been a hard-fought season, we've done a great job with our ZX10R and have scored both the rider's and manufacturer's titles”.

Your gesture towards Tom confirms the fact that you're not just a great rider but also a great team-mate.

Do you think Chaz Davies on the Ducati will be the one to beat next season?

“I don't have the energy to think about others, I believe in myself, in my team and in the work we're doing; we will focus on improving our bike and on being even more competitive. I've put my heart and soul into my riding this season and will do the same next year. I'll work hard to further improve in testing because my goal is to secure a third title”.

Tom Sykes, second in the championship once again, also thanks to the unexpected gesture by his team-mate and main rival, has similar things to say: “to be honest, there's never been any conflict between Rea and I - he clarifies- we've always been good friends on and off the track. When you race to win the world championship, it's normal that there's contact but between Johnny and me it's always been about healthy competition and mutual respect. I lost the title fight but we plan to be stronger next year, also thanks to an intensive test schedule”. 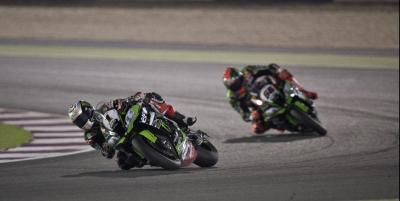 Will Chaz Davies be unbeatable as he was in recent races?

“Who can say? He and the Ducati now have great feeling, they're well balanced. We'll be on guard because they've won six races in a row. Now we need to be stronger and that's our target for the upcoming tests”.

Overall you were the strongest team, and deservedly so

“yes, we finished the season first and second in the championship and the Kawasaki has been dominant for years thanks to its technical development. We did the best job, but now the other manufacturers have closed the gap. We have a lot to do over the winter”.

Would you help Rea if need be?

“It's a strange question (he laughs). What Johnny did for me was really great, but his position in the championship was secure and letting me pass had no negative effect on him. His gesture benefited me and Kawasaki, in this type of situation I would do exactly the same thing. In the past, I've lost the championship because of team orders executed by other manufacturers,  with Aprilia in 2012 for example... and in 2014 we lost the title because there were no team orders.... anyway, team orders are definitely important, also in MotoGP, so if need be, I'd be happy to help Johnny”.

The Kawasaki team is now stronger and more united than ever before.