Dani Pedrosa's first win of the season, at Misano, reminds us that 14 years have passed since his very first win, in the 125 class, in 2002 at Assen.

With the Misano victory, Pedrosa now positions ahead of Phil Read, in overall fourth position in terms of the longest racing career, behind Valentino Rossi, Loris Capirossi and Angel Nieto.

- In addition, Dani's result at the San Marino GP also makes it 15 consecutive seasons in which he has won at least one race in one class or another. The only other rider to have achieved this result is Rossi, between 1996 and 2010.
- Pedrosa has won MotoGP races in 11 consecutive seasons. Only two other riders have been able to do as much in the reigning class, Valentino Rossi (from 2000 to 2010) and Giacomo Agostini who clocked up at least one win every year for 12 seasons from 1965 to 1976 inclusive.
- Pedrosa's Misano podium was his 52nd, with which he equals Phil Read's tally.
- The Misano win came after a sequence of five races in which he'd failed to reach the podium, his longest run without a top three finish since his debut season in 2001.
- The Misano win was Dani's first European victory since the 2014 Brno GP, as well as his first in Italy since Misano 2010.

At Misano Rossi wins the match against... his telemetrist 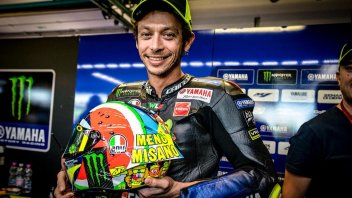 Rossi ready to eat up Misano in a single bite