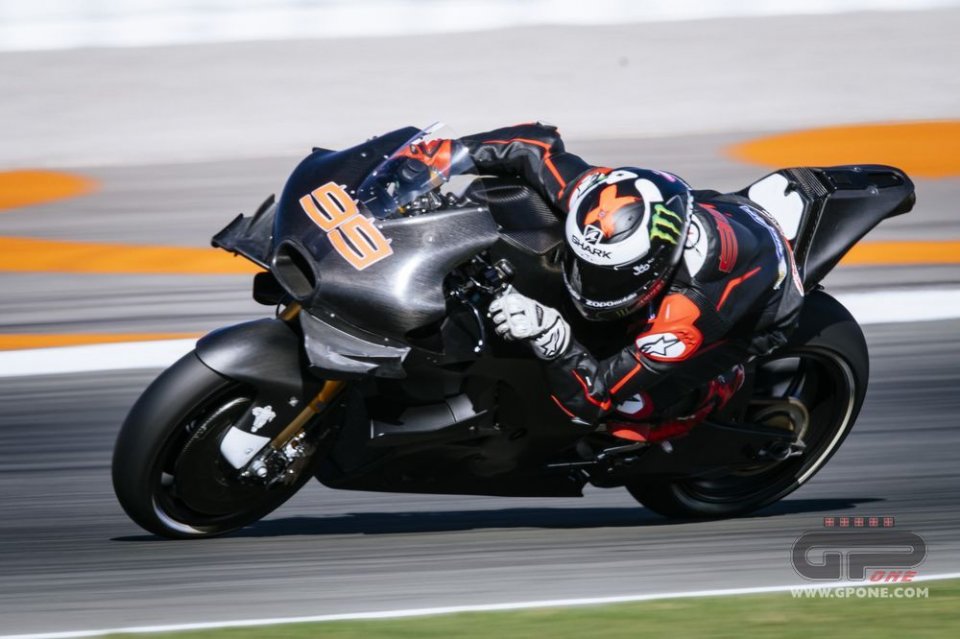 The tests at Valencia provided a final opportunity to see all of the MotoGP riders on track together until next year. It was an intense two-day session, with 12 riders changing team and some interesting questions being raised. We also saw the new bikes, some talented 'new' riders and much more.

The numbers don't always say it all, as everyone was working on different things, but the Spanish two-day session did throw up a lot of interesting points for discussion.

We've tried to sum these up with 10 questions and the related answers.

WAS LORENZO'S DEBUT ON THE DUCATI A POSITIVE ONE? Yes, and it had been a while since we'd seen a rider smile as he got off the Desmosedici for the first time. Day one was topped off with the 3rd fastest time, while on day two Jorge closed 8th. The Majorcan had a lot to get done in order to give the engineers as much info as possible, considering Valencia was his first and last test of 2016.

WHY DID DUCATI USE THE WINGLETS? - The appendages will be banned as of 2017, but the factory bikes continued to use them during the test. Gigi Dall’Igna explained the reasoning: “we wanted to compare the 2016 and 2017 chassis without any other variables and without wasting our (limited) time in order to sort the setup”. Dovizioso tested the GP16 without wings and test rider Michele Pirro also rode a bike with the smooth fairing. WHY DID LORENZO'S #99 FEATURE TWO DEVILS? - There are his new graphics for next season. He previously had one 9 with horns and one with a halo but the Majorcan seems to have become more a devil with the red bike... An interesting aside: Lin Jarvis (Yamaha managing director) is very religious and never liked Lorenzo's use of these symbols.

HOW WAS VINALES IMMEDIATELY SO FAST? - His move from Suzuki to Yamaha is perhaps the least critical move, as the two Japanese MotoGP bikes are conceptually similar. Both have an in-line 4-cylinder engine and this has a bearing on the chassis and riding style. So Maverick would have found the M1 very similar to the GSX-RR. WHY WAS VINALES FASTER THAN ROSSI? - Maverick was a lot quicker than his new team-mate, lapping 0”734 of a second faster. But we're not talking about qualifying, this was a test. Vinales used the 2016 M1 over the two days, and had the sole task of gaining experience. Valentino meanwhile continued with the development work, comparing the new and old bikes and testing different If we consider that the Doctor lapped in 1’30”128 in qualifying, the gap to the Spaniard drops to just two tenths.

DID ROSSI LIKE THE 2017 M1? - Unfortunately no, even if Valentino tempered his comments. He was not impressed by the first evolution of the engine: “we expected more”, while he reserves judgment on the frame, “I'll wait to test it again at Sepang before I form a final opinion”. More dark than light, for now at least.

WHO WAS THE SURPRISE? - Aleix Espargarò on the Aprilia. On the RS-GP, the Spaniard didn't just replicate his qualifying time with the Suzuki, but also went one second faster than times set by Bautista and Bradl.

WHO WAS THE DISAPPOINTMENT? - Karel Abraham, on his return to MotoGP. It can't be said that the Czech rider is lacking in experience, but he was definitely lacking in speed at Valencia. On the final day, only Suzuki test rider Tsusa finished behind him.

IS THE NEW HONDA ENGINE A BIG BANG? - We're referring to the power strokes that, with this type of engine, don't fire at equal intervals but in close succession. Technicalities aside, the HRC technicians were keeping their mouths shut, but the Honda 4-cylinder definitely sounds very different now… HOW DID KTM PERFORM? - Better than in the race, that's for sure. Smith is not yet fully fit, but Pol Espargarò provides clear indications. A 1”878 gap is not small on a short track such as Valencia but, if we make a comparison, it is in line with times set by Suzuki on its return: Aleix closed the first tests 1”619 from the front.

WHO WAS THE BEST 'NEW-ENTRY'? - The prize is divided between the two Tech3 riders Jonas Folger and Johann Zarco. The German closed in 10th place, less than a second from Vinales, and the Frenchman was only 0.067 behind. The unluckiest of all was Rins who injured two vertebrae, Lowes also crashed hard on day one, ruling himself out of day two.

Sepang: Pirro remembers Simoncelli and warms for the tests