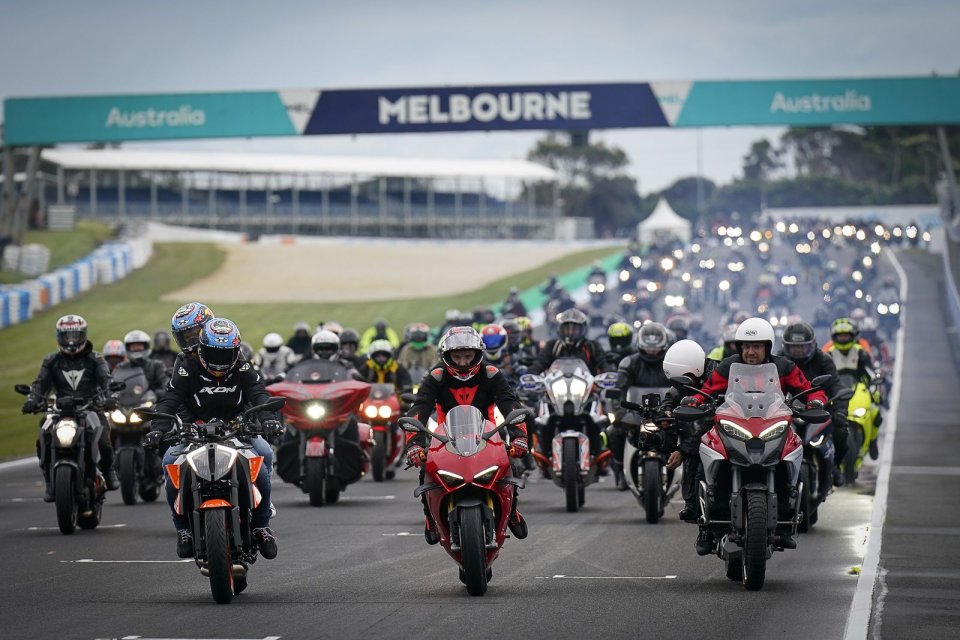 The  Australian Grand Prix is now really in gear! Nearly 250 fans and riders joined Jack Miller, Brad Binder and Remy Gardner  to ride a lap of the unique Phillip Island Grand Prix circuit on Wednesday, finishing a parade that began at the bridge to the island at San Remo. With plenty of burnouts and a few stoppies for good measure, the lap was most definitely a Thriller.

Festivities began earlier in the day in Melbourne, with Miller and Gardner riding down the famous AC/DC lane and checking out the graffiti, as well as enjoying some special artwork ahead of the GP. Local artists Justine Millsom, aka Juzpop, and Marco Pennacchia created a stunning piece of the riders and track, with Miller and Gardner adding their own finishing touches. 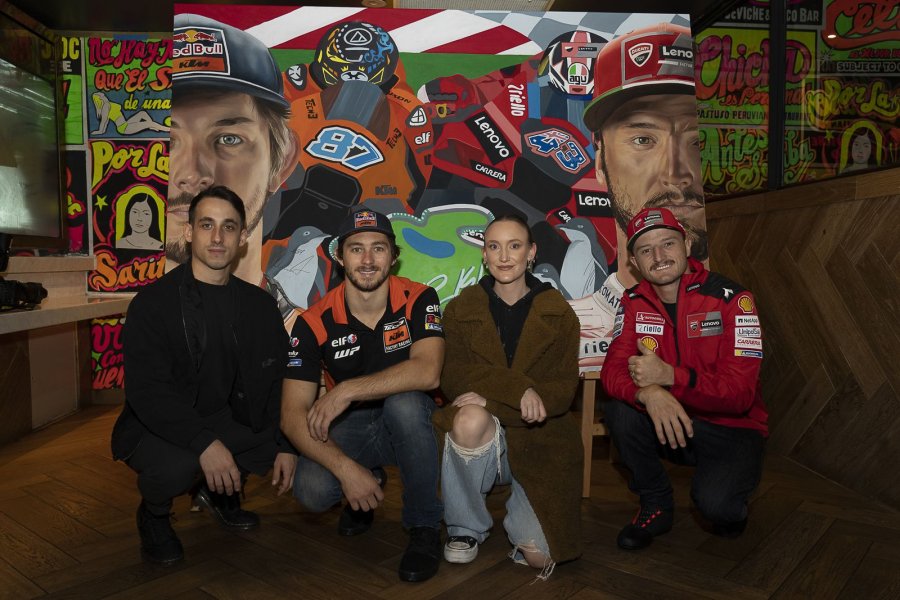 After an arty start, it was next stop: San Remo. There, Miller was joined by Brad Binder to hit the road from the bridge to the island to the Grand Prix track, with the fans saddling up for the ride. Nearly 250 bikes joined the parade, and on arrival at the circuit Gardner headed back out to join them.

Riding Phillip Island is one of life's great experiences, and doing it with three MotoGP riders leading the way added something even more special for the hundreds of fans. Coming to a stop on the main straight for a final photo opp and some interviews - and autographs - the parade concluded in style as the fans now get ready to watch the action from the stands!

"It's awesome to be able to do this here in Australia, it's something I've seen done throughout the world and to be able to do it with the Aussie fans is awesome - said Jack Miller - We've always got a massive bunch of people who come down here and travel far and wide, massive distances on motorcycles, braving the cold and rain. It was awesome to finish most of their journeys off today on the track! There's nothing like coming back to Phillip Island and doing a lap, especially when you can go a little slower and take it all in! It's unreal, heading back into a home GP after not being able to have one for three years. It's a fantastic feeling to be racing back at home, especially in factory colours after I thought it wasn't going to be possible to be able to ride in front of my fans wearing these colours. Some big expectations this weekend but I'm super excited for it"

"There were a lot more people than I expected and we were lucky it didn't rain too much on the way here - added Binder - So far, so good! It was a good way to start off the weekend and looking forward to really getting started. I did wonder how I got roped into this haha! But it was cool to have the opportunity to join the Aussies on the ride today and let's see, maybe it'll bring a bit of luck for the weekend! I really enjoy coming here, it's my favourite track, and past results have always been good. I hope the future's the same."

"It was pretty special, you can definitely feel the energy - concluded Gardner -  -I really enjoyed it! It's been three years since we've been back here so the first laps we did, I think it's extra special for us that we were able to do it with the fans here on the track with us."

Pedrosa: “Rossi? He wasn’t trying to be the fastest but wanted to slow you down”