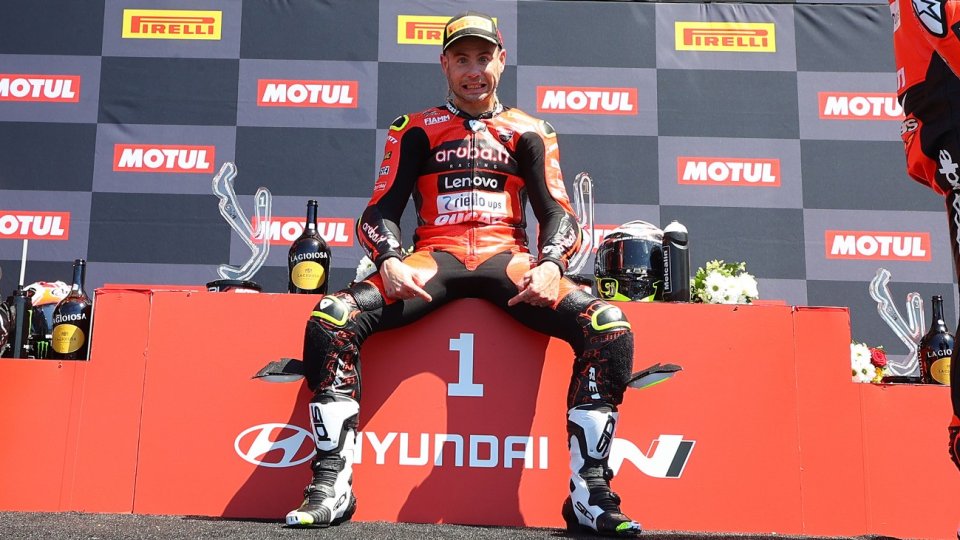 The Misano World Circuit Marco Simoncelli is Ducati again. A picture-perfect Saturday for Alvaro Bautista and the Aruba.it Racing Ducati team. The Spanish rider got a pole this morning in the morning Superpole and reached the victory without too much trouble in the first race of the weekend. The result of a higher pace and a rather sublime way of managing his race, with the decisive clincher at nine laps from the end, to the detriment of Jonathan Rea. It was an outclassed competition, to the delight of the Borgo Panigale managers who were all present.

"It was really hot today. It wasn't a very simple race to manage. It was a new situation for everyone, and that’s why I preferred to be more conservative in the first laps, remaining in Toprak’s slipstream, despite having great sensations. Johnny then passed him, and I decided to do the same, because I knew I had a better pace. I stayed calm, keeping an eye on the new rear tire we had never tried over such a long distance. Ten laps from the end, I tried to pass Johnny. I had just a couple of moments to do it. I succeeded, after which I set my own pace, keeping away from him. I really enjoyed riding the bike, even more than in previous rounds,” he began.

Were the tests carried out in Misano for three months an advantage for you?

"In both Barcelona and Aragon, we had changed the ergonomics of the bike. In yesterday's FP1, I wasn’t at all comfortable, and only then did we choose to go back to the base we found here in March. We had partly started this in Assen and Estoril. And it turned out to be a wise and winning decision. Just look at the performance from yesterday afternoon onward."

You now have 22 lengths on Rea. Is your mindset the same?

“To be honest, I don't think much about the championship. With the unprecedented race format consisting of three races for each weekend, which I like, there are a lot of points up for grabs. In each session, I simply try to stay focused on myself, on the work to be done, and on having fun,” he admitted.

What has Alvaro Bautista changed compared to 2019?

"Three years ago, I was thinking exclusively about taking the bike to the limit, ignoring all kinds of risks. Now, however, I understand the importance of managing the various situations that arise, pushing only when necessary. I don't think I'm faster than 2019, but more consistent. Why has the V4-R been and still is in competition for the title only with the me? I have no idea. You should ask who rode it after me," he concluded.

Bassani: “I was going fast without knowing why, now I feel stronger”