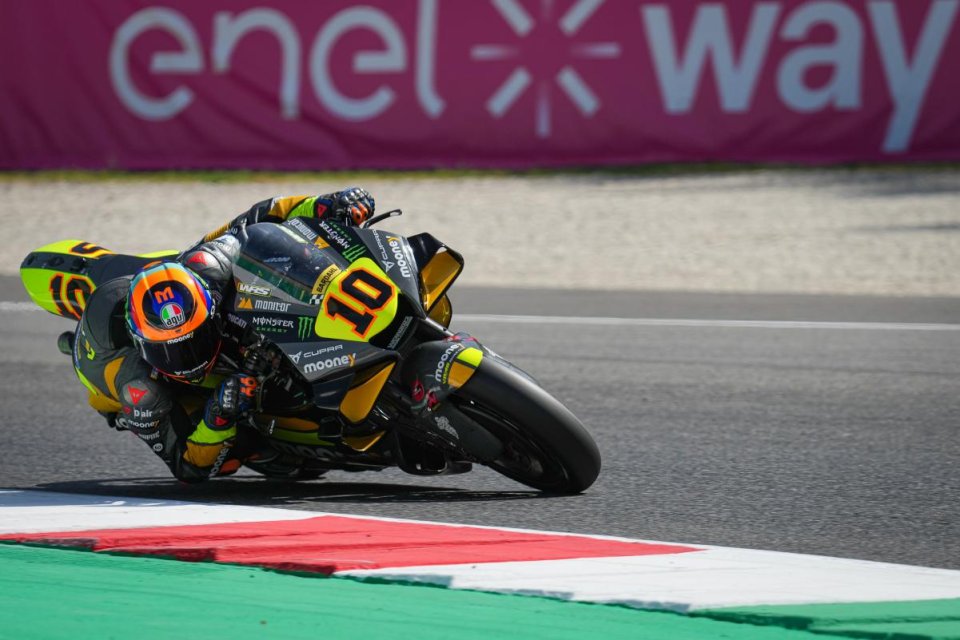 It's joy and smiles for  Mooney VR46 at Mugello. Besides Marco Bezzecchi's 5th place, they celebrated Luca Marini’s 6th position. A competition fought tooth and nail by the Ducati rider at his best seasonal performance.

There’s enthusiasm in Luca’s words but, at the same time, awareness regarding the progress made during the race weekend.

"I’m satisfied with this weekend, since I feel like I’ve made progress," he began. "I didn't have the pace for the podium today, but I wanted to be there to take advantage of it, just in case. After the Jerez test, I had more confidence in the Ducati, and that's what matters. Now we have to confirm ourselves in Barcelona, and in all the races."

What was missing today?
"I lost a lot in the T4. I was slow going out of the last corner and, every time I’d straighten the bike, I’d get two tenths. During the race, all this is accentuated, and I haven’t been able to solve the problem. However, I have to admit that I broke away well, although it was complicated with the tires, since my front was closing. Instead, the rear dropped at the maximum lean angle, since Mugello is a very demanding track for tires."

This Ducati seems to have become a bike for everyone.
"Everyone follows their own path. At the moment, Pecco is ready to fight for the victory in every race, while I'm missing being in the scuffle for the podium. I have to take my steps, aware that the level of the MotoGP is very high."

What was it like to fight it out with Bezzecchi for the podium?
"It doesn't makes that much difference. It's like when you fight with him, but you're in back. The difference is  battling with Pecco or Quartararo. Today, at a certain point in the race, I also thought of doing like Petrucci in 2019. The lesson I bring home from this race is the awareness that I’m not far from being up front.  The problem, however, given the level of the Championship, is that it’s also hard to fight for tenth place, since the effort you make on the bike is always the same. The top guys up front seem to be better at managing the tires, considering I gave everything I had in the beginning."

Do you think you’ll be able to take that last step in Barcelona?
"I hope to do it on Friday. From the tests in Jerez to the Le Mans race, we’ve figured out the direction. Then, what to do or not on the bike becomes complicated, since the variables are many. But we're getting there, even though I don't think we're going to revolutionize the bike for the next race. I have to try to improve how I stop the bike and then be able to race better, since I’m lacking that confidence. In fact, the Ducati goes always wide. That test was useful for everyone, not just me.”