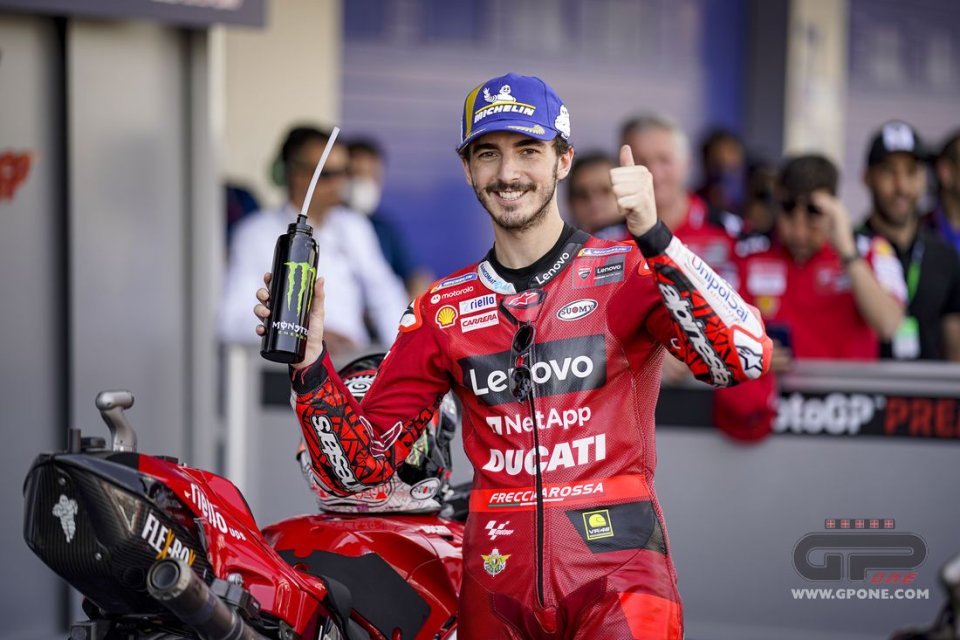 There are good, fast, very fast laps and, finally, perfect ones. Pecco Bagnaia’s qualifying in Jerez belongs to the latter. When the screens showed his 1’36”170 time, it was hard to believe. The Ducati rider shattered the previous record and got 4.5 tenths on Quartararo, on one of the French rider’s favorite tracks.

"The truth is that I think it was the best lap ever,” Bagnaia admitted. “It was all perfect. I didn’t make the slightest mistake. When you push that hard, it's easy to make mistakes, go a little too wide at a turn. But it didn't happen. My luck was to be able to race in last Sunday. In that race, I found those sensations I was missing. When I got here, I improved, lap after lap."

What does it feel like to be so fast?
”I worked so hard to regain this confidence. I had already been fast last year in the first GP in Portimão, when they canceled my lap due to the yellow flag. It means that everything is working well, but it also takes a bit of luck, like finding a very high-performance tire. In the flying lap, I was always fast, and I felt very good today."

As you were riding, did you realize what you were doing?
”It felt natural, but I knew how fast I was going. The new smaller fairing helped me a lot in the third sector of the track, the one where I wasted time last year. But I have more problems in the first half of the track, yet I got the same times."

Did you have time to enjoy the sensations you felt?
"I think a bit less about it, because there’s the race tomorrow. The thing that matters most, the one that gives points."

What’ll happen tomorrow?
"It's Quartararo's track. He's always been fast here. Compared to yesterday, I managed to get closer to his pace today and, in the FP4, I was fast and steady. I’m hoping in a good fight against him tomorrow, but it's too early to say."

Is the victory the only goal?
"Considering that Fabio has already won a race this year, we could make a deal with him to leave me this one,” he said laughing.  "A rider always wants to win, but the most important thing for me will be to fight to succeed, because it's the first time this year that I get the chance."

Who could get in between the two of you?
"Aleix Espargarò and Mir have a good pace. I think Fabio and I have done more or less the same job, and our pace is similar. But he  was able to do more laps, while I had to be a bit calmer because of my shoulder."

And Marquez?
"Marc is getting faster and faster in the race, and his pace isn’t bad. I'm sure he’ll be fast tomorrow, but I don't know how fast."

What’s your physical condition like?
"It’s getting better. It was a bit worse today than it was yesterday, but that's normal when you push. I hope my shoulder won't stop me in the race. It didn't today. The mobile clinic will definitely help me."

And in case of a duel on the last lap against Quartararo?
"I hope I don't make it to the last lap with Fabio nearby,” he said laughing. "But if I have the chance to pass him, I won't think about my shoulder."

Are you ready to risk everything?
"I would think so if it was the first race of the year, but I worked so hard to get back to this level, and it wasn’t easy. I finally have confidence with the front again. I can take advantage of my strengths, but it's also time to think about the points in the championship."