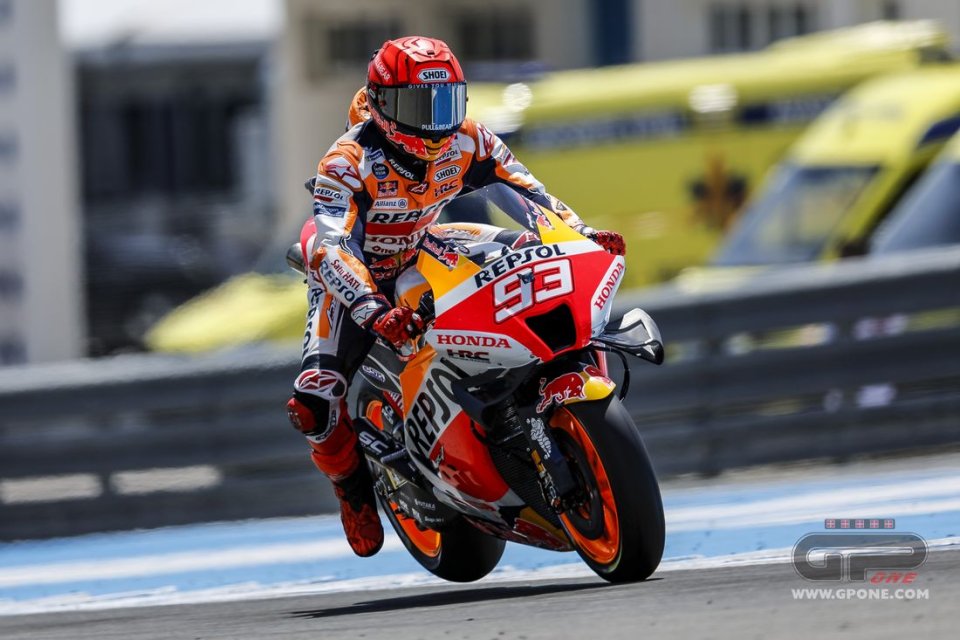 “My 19th place in FP4 is unrealistic, but neither is 5th in qualifying. I would say that at the moment I am between 5th and 10th". Marc Marquez has never been the type to find excuses, to blame his bike or astral conjunctions and he hasn't changed one iota in this. At the moment he can’t find a feeling with the new Honda, but at the same time he knows that he too has to improve.

“I have won championships with bikes that are worse than this - he summarized - It means that we have to work, on some tracks more than others, to wait for the right moment, but it's not all the bike's fault. The results are always a sum of things, the bike, the rider and the team ”.

Now, the result is negative.

"The problem, at least in my case, is that I don't understand where the front limit is - he explained - So I try to be very precise in riding, I can't exaggerate, otherwise I would crash many times. By doing this I am able to be consistent, but I am also slow ”.

In qualifying he first followed Bagnaia and then Quartararo.

“In truth I followed everyone - he smiled - What did I understand when I was behind Fabio and Pecco? They were simply faster than me, everywhere. Today I needed someone in front of me, otherwise I wouldn't have been able to go below 1’37.4 by lapping alone. When you follow someone you lose under braking, but I gained a lot in the fast corners, the point where I struggle the most ”.

But he’s on the second row.

“Which will be of great help to me tomorrow - admitted Marc - In today's MotoGP it's easy to start 12th if you are only missing 2 tenths of a second, so it's a good result but the race will be different. The way I rode today to set the time is not what you can use in the race. We are not ready to fight for the podium. A good result will be to try to be in the top five. But even like this will be very, very difficult. From 5th-10th is our position at the moment and it’s where we will try to fight.”

Yet Marquez, accustomed to quite other goals, hasn’t lost heart.

"I'm not disappointed - he assured - When Honda decided to make a big change on the bike, I agreed. With the old one it all came naturally to me, it was a bike that I rode since 2013, some evolutions, but the character was the same. Now it's a big difference, and even Honda is trying to understand many things. Pol is riding in a different way, because I think he can ride it a bit similar to what he had in KTM.”

Yet Marc, only last year and in poor physical condition, won three races.

“Last year I won three races, but in Austin it was also possible to win, Germany is coming up and the Misano win was because Bagnaia crashed. You only get frustrated if the expectation is too high. My expectation today was to try to be on the third row and I finished second row, so I'm happy. We must be optimistic, but also realistic. And tomorrow what we can achieve is 5th, 6th, 7th place. In a good race. Not in a bad race. So it’s what we will try.”

Naturally the Spanish champion is ready to face the challenge.

“You have to know how to suffer and that's what I'm doing - he continued - In 2013 I followed Pedrosa and Lorenzo to improve, then the others did it with me. I know that tomorrow I will not be able to fight with Quartararo and Bagnaia, Aleix Espargarò is also riding well, but this does not mean that I don’t want to race ”.