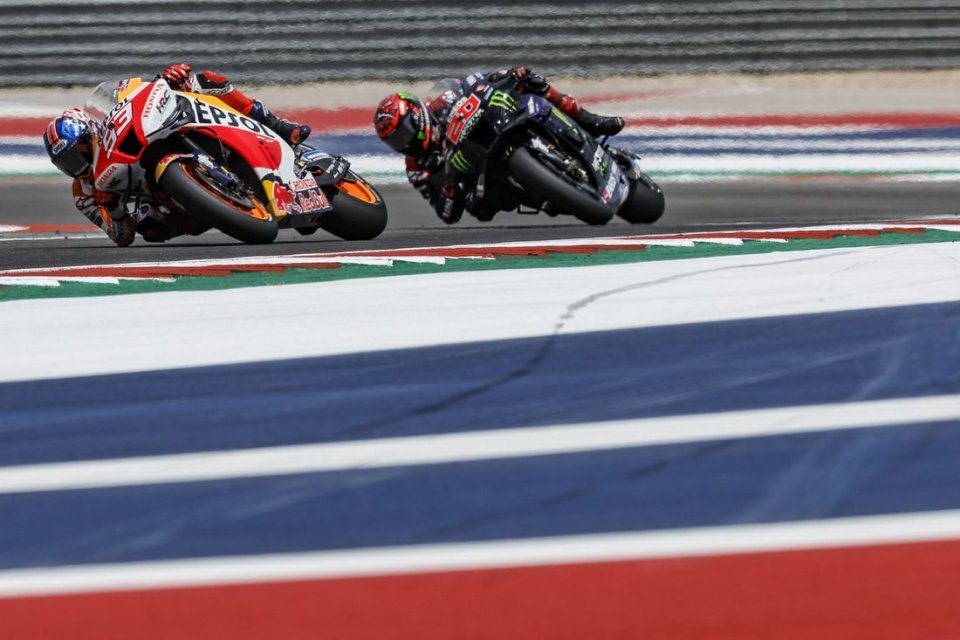 “I don't like to say that without the starting problem I could have won, but I had the pace to try and definitely to be on the podium." Marquez knows that lady luck turned her back on him this time in Austin but, on the other hand, he managed to bring a convincing race to an end, where he was the star of an exciting comeback. All in all, it's exactly what he needed to regain his confidence.

"We had a technical problem. Honda is investigating what happened, even if they more or less already know,” he explained. “When I arrived on the starting line, I saw a warning on the dashboard. I tried to start, but the bike wouldn’t push, as if there were a speed limiter for the pitlane. After the first corner, when I deactivated the front lowering device, the bike started working well again, even if not perfectly."

Too bad he was in last place at that point.

"From then on, a new race began, a sprint race for me,” he said. “I told myself to give it everything I had. I did that, and when there were five or six laps left, my body said enough, and I just tried to finish the race. It's not the result I expected but, if I look at where I was at the first corner and where in the end, I can say that I regained a lot of confidence, and that was my goal. I tried not to fall. The doctors told me everything was fine, but I was scared after the recent accident. I rode well, and that’s the most important thing.”

There's no disappointment in Marc's mind.

"I’m satisfied. I was already satisfied to be here and to have finished the sixth race,”  he stated. “It’s true that it seems that when you’re in a bad moment everything happens to you. I’ve never had technical problems, and today I did. I still want to thank the team, because they helped me a lot and gave me the confidence I needed."

The important thing for him was to get the bad thoughts out of his head.

"I was relaxed today, already in the warm-up, while I had doubts in qualifying yesterday,”  he continued. “I felt good, I had confidence. I know that I was in the best circuit to get it back. That's why I pushed to race here. Now I’ll have to understand what my level will be in Europe. I don’t think I’ll be able to fight for the victory in every race, but here I understood what the weaknesses of the bike are, and I told Honda where to work to be competitive. Pol drove well on several tracks, Nakagami on others, but there are areas we need to improve.”

Marquez is already thinking about the next step.

"Today I overtook  in braking. The bike is very good at that point, but making it go and understanding the front tire is more complicated,” he observed. “It’s the opposite of the one I rode last year. I used a completely different set-up. Yesterday, I tried some things that made me think that we’re on the right track, and other riders like them too."

It seems that Marc is also on the right track for returning to his usual levels.

"I came here to compete. I already said that Thursday,”  he explained. “In the paddock or in the garage, you can think of many things, but when you’re on a motorcycle, you forget the risks. I tried to control myself. When I ended up last, I didn’t set any goal for myself. I recuperated, step by step. I also made a mistake at the first turn, but I stayed calm. On the last lap, I felt tired. Bagnaia was close, but I wouldn’t have gained anything to get fifth instead of sixth. That was enough. I still took risks. I pushed, and it wasn't easy."

What will happen now?

“In this championship, you can't predict what will happen in a GP. You don't know. During the weekend, you have to accept the position you’re in. I'll certainly push, I'll take risks. The goal is to always fight for the podium, but this isn’t the time to succeed," he said.