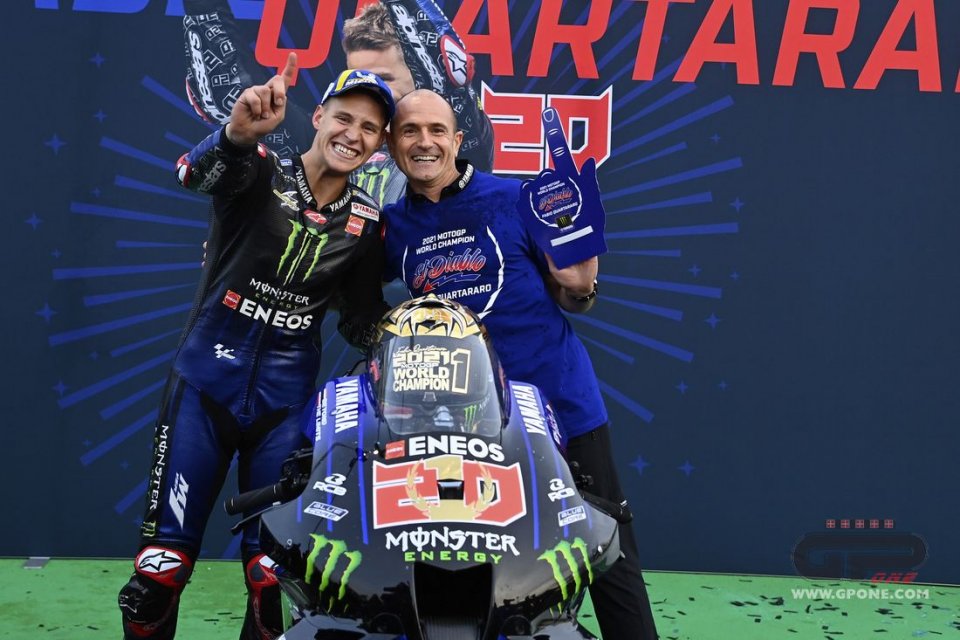 Six years down the line, and Fabio Quartararo has taken Yamaha back to the top of the world. At Misano the Frenchman won the MotoGP title that Iwata had missed out on since 2015, when it was Lorenzo who triumphed. The M1 and the Diablo have formed an unbeatable pairing and Massimo 'Maio' Meregalli couldn't be happier. Especially since the title win in Italy was totally unexpected after Saturday's bad qualifying.

“My first thought was that it would be impossible to win here - confessed the Italian team manager - With Fabio 15th and Pecco on pole with a Ducati squadron behind, we thought they would block the whole group. We had imagined, at best, that Fabio would finish 5th or 6th. Then what happened, happened and a huge weight was removed from our shoulders. We will go to Portimao and Valencia without the slightest pressure, with the idea of ​​also winning the two championships that are still missing, teams and constructors".

Everyone knew that Quartararo was fast, but this year he has also taken a step forward in terms of consistency. What has changed?

"Certainly the feeling on the bike, from Qatar he told us he had extraordinary feelings on the front and this allowed him to overtake when he had to. Above all, the M1 was consistent, the basic setup worked on 90% of the circuits. Clearly, we were also a bit lucky with the weather. In damp track conditions, such as those of Saturday in qualifying, even though Fabio felt a little pressure there and didn't want to make any mistakes, we suffer."

How would you describe his season?

"Overall he was strong and determined from the start, always focused. The thing that surprised me a lot is that Fabio enjoys himself during the race weekend, this helps him to feel less stress. He brought a bit of happiness inside the garage and makes everyone participate. This quality is very similar to that of Valentino, he is good at making the people around him give more than 100%. Fabio has his own way of forming a group, with Diego and Pablo (Gubellini and Guilliem, chief technician and telemetry engineer, ed.), it is as if he were three people in one. They have a lot of trust in each other, leave nothing to chance and prepare the weekend in a scrupulous and well-organized manner".

You mentioned Rossi, who bade farewell to his fans in Italy for the last time at Misano. Has his baton passed to Quartararo in Yamaha?

“Valentino is Valentino, probably what he has achieved will be unattainable for any other rider. I'm just sorry that he didn't finish his career in a better way, it was a difficult season for him and he deserved something different. We all have yet to realize that he won't be there next year, it will for sure be strange ”.

After the many problems, including technical ones, of last year, at the beginning of the season would you have thought you would win the title two races early?

“No (laughs). We expected a double win in Qatar somehow after the tests, we were waiting for Portimao, because at Portimao last year we really suffered. That GP gave us an indication that the M1 2021 was a successful bike, it probably doesn't excel in anything but it has a very good balance and Fabio manages to make it perform more than 100% ".

Let's already try to look forward to next year: you will have the world champion and Morbidelli. Is it the best team on paper?

“It is certainly a good team. Franco showed that his conditions are improving but, unfortunately, he was unable to do more than half the race from a physical point of view. He is also adapting to a different bike and he tells us that he feels it his more and more. I saw him happy after the race, I think in Valencia we could see him at 90%. Then we will see what our Japanese engineers bring us, not so much in the Jerez tests but in the Sepang ones ”.

Quartararo says goodbye to Valentino Rossi: "The last dance of the king...