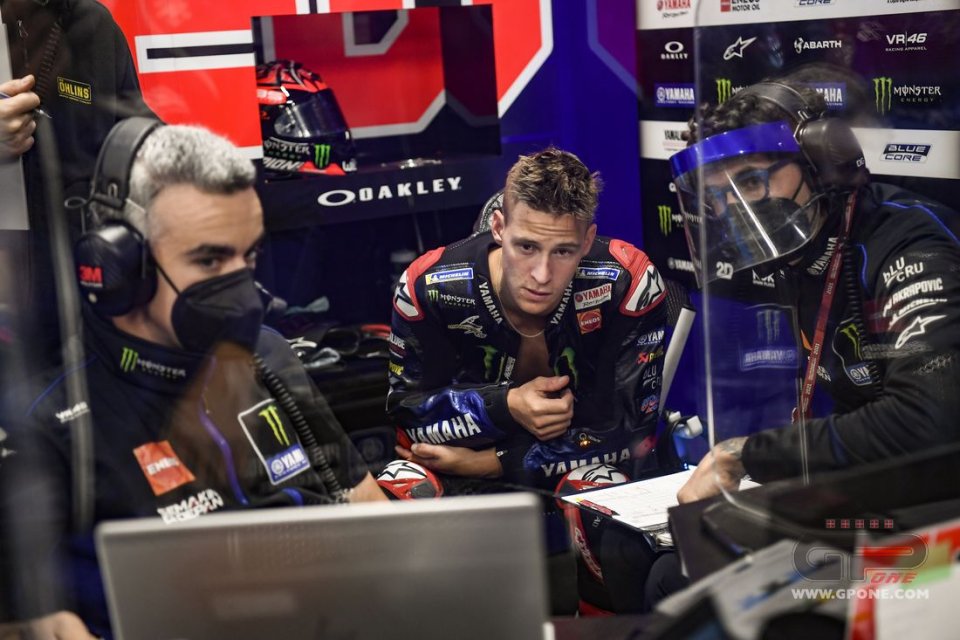 There is a first time for everything, even for not being able to go through to Q2 for the first time and that's what happened today at Misano with Quartararo. The Frenchman will start tomorrow from 15th position on the grid and Bagnaia from pole, not the best situation to wrap up the battle for the title. Fabio is fully aware of this, but on the other hand he is also aware that, if he does not succeed tomorrow, with a 52-point advantage he will be able to wait for Portimao without worrying too much.

“Obviously I'm disappointed, but I keep everything inside me - smiled Quartararo - In FP4 I realized that it would be tough in Q1 against Lecuona and Bagnaia. In the end, unconsciously, I didn't risk enough in the second half of the track, where there were more patches of wet. In fact, in the first sector I had the second best intermediate of all the qualifying sessions, while in the last two I was losing a lot. I think it's something one can understand, I found exactly the conditions I hate and I did my best ”.

Fabio takes all the responsibility for what happened, but he wants to stay calm.

"In the end that’s the way it went and I have to improve in those conditions - he continued - I will not start from the best position tomorrow, but on the other hand I am not worried. My strategy is simple: make up as many points as possible, I know that in the dry my potential is very good. I won't ask to know Bagnaia's position, it would just put more pressure on me, I'll just have to push from the first lap ”.

And then see how it will end, even if the championship does not seem to be in his thoughts…

“Honestly I'm not thinking about it at the moment - assured Fabio - Besides, Bagnaia will feel the pressure to get a good result, not just me. Maybe he will make a mistake, even if it is not something I wish him, but if everything goes normally. I think I can wrap up the championship at Portimao ”.