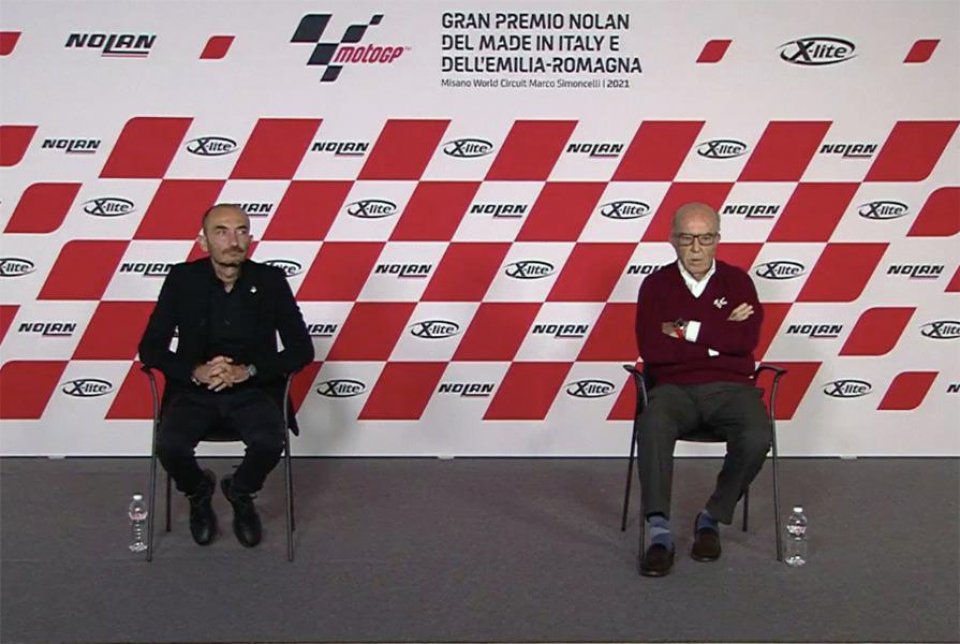 Ducati will be the new sole supplier of the MotoE starting from 2023. The announcement was made in Misano by the CEO of the Borgo Panigale manufacturer Claudio Domenicali.

"I'm excited, because what we are going to talk about today will make a big difference between what was before and what will be after. We have reached an agreement with Dorna to be the sole suppliers of the bikes for the MotoE from 2023 to 2026 - he stated - We will continue to do what we have always done, but in a new way. There is no better way than racing to gain experience and testing. As in MotoGP, where our engine is one of the best, so we want it to be in MotoE. The main problem is weight, we want to make a bike as light as possible, we are super excited to get started ”.

The Dorna boss gave his blessing to the new collaboration.

“For us it is an important day – were his words - In the last 2 years we have talked to various manufacturers and the Ducati project satisfies all our objectives. We are proud to announce a new era for MotoE ”.

"We have recently reached the agreement with Dorna, we have just started working on the project and it will take some time before we see it on the track - explained Domenicali - In 2022 we will start development on the circuits in order to achieve safety standards and the required performance. We want to bring our knowledge from MotoGP ”.

“Electric mobility is viewed as boring, but I have tried very powerful electric cars and they were among the things that were most impressive me to drive - he underlined - The main problem is the weight and on cars it is easier to solve. I think every company needs to improve its sustainability and we need to learn how to do it. Today the technology is not yet ready for light means of production, but it will become so and we want to be ready. The help of our group will also be important, for example Porsche is developing its own battery technology, so we have a lot of experience to draw from. "

Gigi Dall’Igna and his men will be responsible for the new MotoE bike.

“Our racing department is already quite expensive, we will increase it a little - joked Claudio - We have decided to race to develop the new technology, so we will make a real racing bike but also involving the production bike department. The biggest challenge will be to make a bike that is not too heavy and with sufficient autonomy, and recharging times will also be important. We are only at the beginning of a very interesting journey ".

Logically in Borgo Panigale they are also thinking about a road model, but we will not see it soon.

“We are now defining the race bike, then our plan is to make a road version of it, but we don't have a date. I don't think it will happen before 2025, I think before 2030, when the technology is ready. Improving the batteries is not a quick process, but a lot of people are working on it. It is difficult to say if and how much electric motors will replace combustion ones, it will also depend a lot on the diffusion of E-Fuels ”.

Stoner has recently complained about the introduction of 4-stroke and electronics ...

“I love Casey, but I don't share his opinion - said Domenicali - The last three races in MotoGP have been fantastic, I think the electronics improved safety, both for riders and for road users. Our duty is also to make bikes more socially accepted, the 2-strokes were exciting but too polluting. We can talk about the lack of sound, but we will invent something, progress cannot be stopped ”.

On this point, Ezpeleta also gave him a hand: “For me MotoGP is better than 500, the world is evolving and so are the races. These bikes are faster, safer and put on a great show. We will continue to develop everything that interests the market and the public. I'm happy with MotoGP’s noise but also with the silence of the MotoE bikes”.

All that remains now is to see how the Ducati fans will welcome an electric red.

“The Ducati community is a big community, there are some more conservative ones, who also complain about the fact that we have removed the trellis frame on the Monster. They still think that a Ducati should have two air-cooled cylinders, but times have changed and we have changed with them. We made a V4, both for sports and touring, we also eliminated the Desmodromic system. I think electric mobility will make sense in the future when we make light enough bikes,” he concluded.