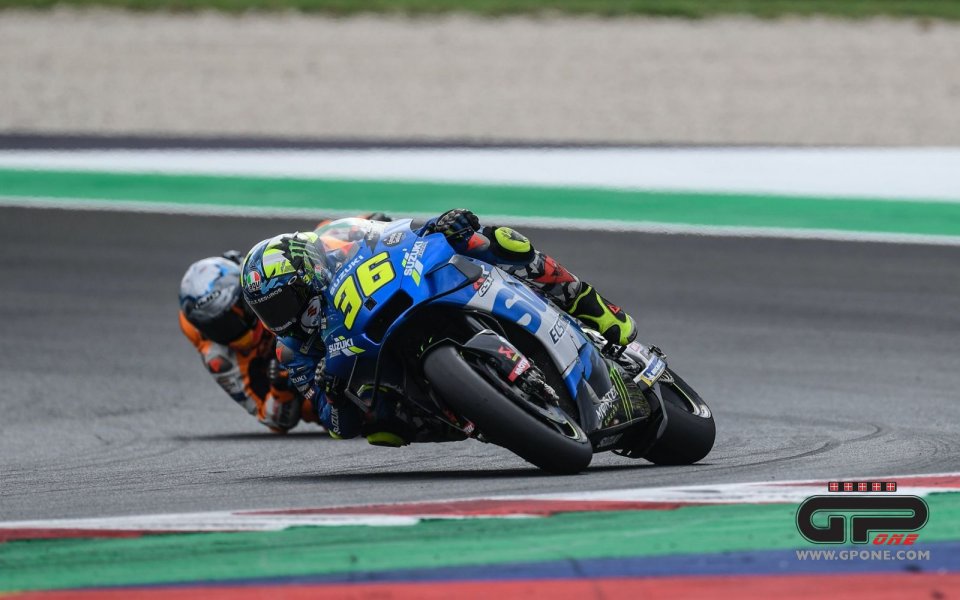 Joan Mir is unable to hide his frustration and perhaps a bit of anger. The reigning champion with Suzuki paid the price for a disappointing qualifying and failed to do anything about the race result at the Misano track by finishing in sixth position. The Spaniard, four races from the end of the championship, sees his closest rivals move further away in the standings and his dream of defending the title seems to be fading more and more. All that remains is a not particularly exciting fight for second place in the standings against Bagnaia (Ducati) who seems to have an edge over the last few races.

“I won’t lie, I’m disappointed,” said the Majorcan rider. "I expected much more at the beginning, but I wasn’t able to overtake. We took the wrong choice with the front, and it was like trying to survive in this race. It was much more different than what I expected, because I wanted to go and attack, and somehow I was defending. It wasn’t good feelings. But I will try to improve the bike in the test, which is important for us, and then try to give the last races more potential. I wasn’t where I want to be. Races are like this, and I hope to be better in the future.”

Do you think your championship ended with today's race or is it something you had already begun to reflect on in past races?

“The thing is that we couldn’t afford to make any mistakes, and it’s not that I made any mistakes but we just couldn’t be as competitive as everyone expected. That’s why I’m disappointed, because I expected more. It’s difficult to assume that the championship is over, and the day that I’m not able to fight for a championship I will retire. I won’t wait one year. I’m here for that reason. But this time it’s like this. It’s a difficult day for me.”

You spoke of a wrong tyre choice on the front…

"Normally the Suzuki can't make good use of the hard front tyre, so now we're trying to get the best from it because I'm not happy with the medium. When we saw during practice that the track temperature did not allow the use of the hard compound, we opted for the medium which was fine for Rins, but in the end it does not suit my riding style, we are different riders and I ask for more from the front. So in the race I immediately realized that that extra boost due to better tyre wear in the second half of the race would have come too late and by now the advantage of the leading group was too much. At the end of the race I found myself fighting for a fourth place between Marquez's Honda and Miller's Ducati but a pass on the green and my mistake made me finish sixth. But by then I was there to have fun, it wouldn't have made any difference to be fourth or sixth, I know I gave one hundred percent also in this race but once again it was not enough ".

If the title now seems out of reach, what will this mean for the final races of the season? Will you change your riding style, perhaps taking more risks?

“The risk is always the same. I’m always risking what I have to risk. I always make manoeuvres. Check my races – I don’t have to say that I don’t take risks. Of course, if now I have the opportunity to win some races and make some manoeuvres at the end of a race and all this stuff, I don’t care if I make a zero. So, it changes everything a little bit. But I have to have the opportunity to win that race.”

In the next tests, will we see anything that can help you in the last races also in view of next season?

"We do not yet know exactly what we will work on, we will certainly improve the device again but also the braking needs an evolution in order to be more competitive".

So the next races will be a big test in view of the next world championship, to avoid this year's problems?

“I’m a bit angry because I know my potential of this year and I’m angry because I’m riding better, I’m making less mistakes, I’m a better rider and I will not get the championship. It’s difficult to understand. But, what also I have to say is making me happy is Suzuki is going in the same direction. We all see what is happening and I believe that they are pushing as hard as they can. We can think that the next races are like a pre-season, like every race is an opportunity to give some information and make some improvements on the bike that for sure we need.”