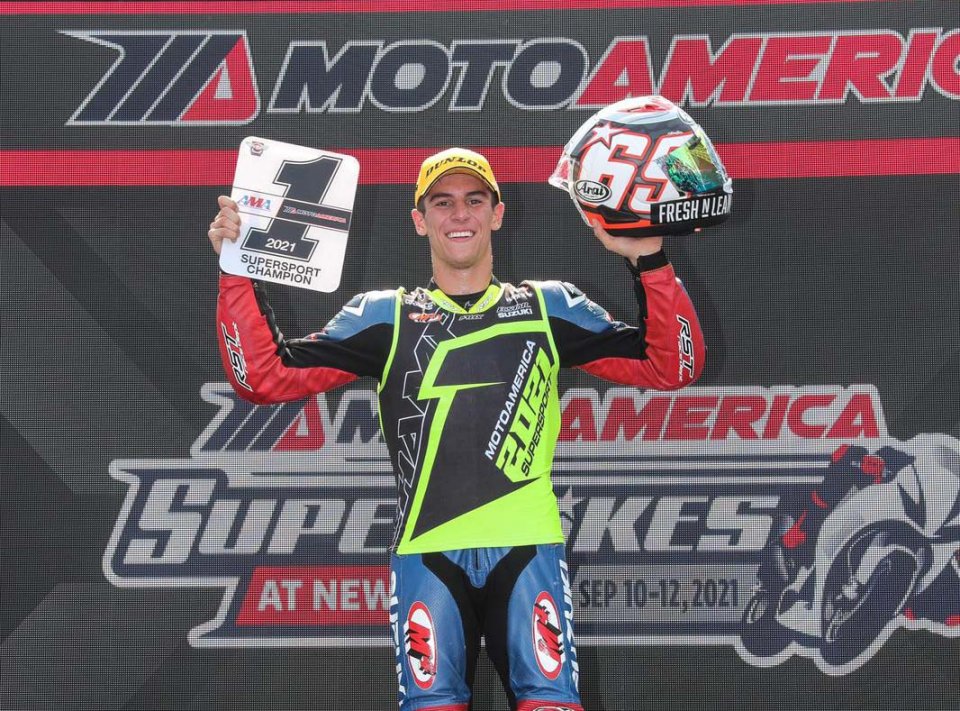 The newly crowned MotoAmerica supersport champion clinched the title with Team Hammer Suzuki M4 with two races remaining, amassing 10 wins in 14 races.
SDK Will become the first member of the specially formed American Racing Academy to be promoted onto the world stage.
This won’t be SDK’s first time appearing on the Moto2 grid, as the american was a late replacement for Iker  Lecuona in the final rounds in Valencia 2019, after the Spaniard was called up to MotoGP.
SDK will join his countryman Cameron Beaubier in the American Racing Team for the 2022 season under the guidance of John Hopkins who will continue as the Team racing director.
The duo is aiming to take their collective championship winning knowledge and translate it into Moto2 success with the same level of passion and determination.

"I’m very happy to have Sean ride for the team next season - said Eitan Butbul, Team Principal - I have known Sean since his time in Red Bull Rookies cup and been working with him since we started the Academy project, Sean is incredibly talented rider, hard worker, “never give up” and a positive person. After 3 Successful seasons in MotoAmerica with Team Hummer Suzuki M4, Sean will be the first rider from our American Racing Academy program to join the team and complete our goal to have 2 American riders at the American Racing team.
The project between the Academy and the team is to build a platform and a clear path for talented American riders to give them the opportunity to compete at world level. For me, to have an all-American team is something special and the entire team will do the best to bring the best results and to represent the US at its best".

"The entire Team and I are very excited to finally announce Sean Dylan Kelly will be joining us next season making American Racing an All-American Team! - replied John Hopkins, Racing Director - I strongly believe he has the talent, determination & motivation to make the step up and be competitive within his 1st season in the Moto2 World Championship. I also believe he’ll have a Championship contending teammate within Cameron Beaubier who will help play a crucial role in speeding up Sean’s development throughout his 1st season.
On top of this vital piece to the competitive puzzle, the whole Team & I are 100% committed in helping Sean make a successful transition and will give him all the tools he needs to go out and show the world his true talent & potential".

"First of all I want to thank Eitan, John Hopkins and the American Racing Team for believing in me and giving me the incredible opportunity. Making it to the World Championship is a dream come true for my family and I and I’m really excited to get back into MotoGP Paddock as a Moto2 to Rider. It make me proud that this will make us a complete American Team, teaming up alongside Beaubier.
‘I’m ready for this next step in my career and I’m thankful for all of the people that made this possible!".