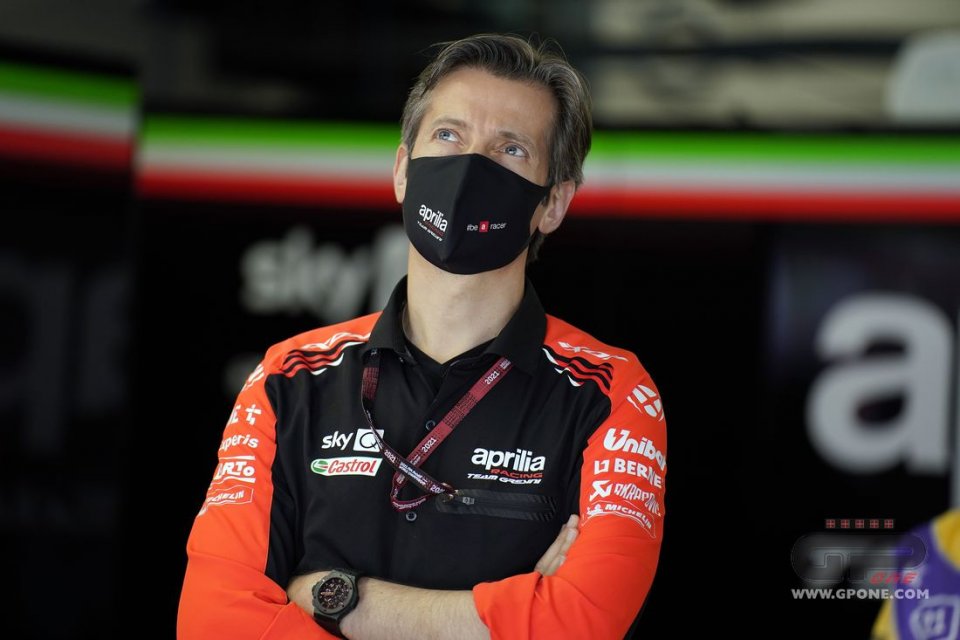 Yesterday we published the first part of our interview with Massimo Rivola, CEO of Aprilia Racing (see HERE). We spoke with him about Vinales’ arrival and their relationship with Dovizioso. A story that goes hand-in-hand with the development of the RS-GP, which made the podium at Silverstone. But the manager from Faenza was viewed with suspicion when he entered the MotoGP from the Formula 1 and Ferrari. And his choices to bring in technicians with experience in four-wheels were also looked upon with suspicion.

Rivola is the first to admit it: “Our work group is becoming stronger. The people who had been seen with a bit of skepticism – a bit by the press and maybe even from within  – because they came from four-wheels, have integrated. Having a vaster culture is an advantage.”

“The spoon? Now they’re beginning to understand why I did it.”

You were also looked upon with a bit of skepticism. You also presented an appeal against Ducati’s “spoon”...
“An appeal that everyone is now starting to understand. I hear that there’s too much aerodynamics. I experienced it for twenty years, and I pointed it out immediately. Be careful if you don’t write the rules well! All this pleases me. I had already experienced these problems, and I had to do it. I obviously felt this skepticism towards me, both in the paddock and within the company. It’s normal, but I’m used to going my own way, because I believe in what I do. I work a lot, and the work pays off. So, full speed ahead! Now were improving, and this helps everyone, even me.”

This is a good time for Aprilia, but when you joined the company, the situation was complicated. What did you think?
“What was I thinking!” he said, chuckling. “Seriously though, it meant that there were so many opportunities to develop. I always try to see the positive side. The problem is always time, how much you have of it to be judged. So you have to play some wild cards if you don’t have that much. When you’re far away in terms of performance, and you don’t have many resources, but you feel you have the chance of being able to do something, every step must be seen to. Like Minardi said, you have to count up to ten. I don’t deny that there was some luck involved but, at the foundation, there’s work. If you take a person from the four-wheel [sector] and put him in motorcycling, if you know that he’s a hard worker and that he’s done really well, then he’ll get there. It’s more a problem of integration, of making him understand the corporate culture. All this makes the challenge even more fantastic but, also in the past, when I was asked what I would need, I always said ‘time'.”

“To improve, I had to find the balance to change without destroying things”

Don't things get changed overnight?
“When you join  in a company of a certain size, you can’t double it, otherwise you destroy it. It would mean that you’re disrespectful of what had been done before. The balance to be able to not destroy, but to give more opportunities by creating more tools and bringing knowledge from different worlds, is the most difficult to obtain. Then you see that you get results on the track, and I’ve always said that our 2020 bike was much better than the 2019. You couldn’t notice it because the others had taken an important leap forward, especially KTM. We measured our performance on ourselves and saw that, instead of taking forty seconds per race it took fifteen and, this year, we went to five, ten. Tall grass is easier to mow than short. If we hit two and a half next year, it’ll mean that we’ll be getting even closer. Having two strong riders and a test rider, who also rides similar bikes, will help.”

“I’m aiming for the first victory next season”

Speaking of time: when’s the first win?
“I’m aiming to win a race next year. But let’s stay calm. The fact that we’ve gotten a podium tells us that we can do it, but now we have to raise the bar. It’s fine to be happy for a podium, but our celebration at Silverstone was similar to that of a World Championship because it was exciting. It hadn’t been for 21 years. We have to make sure that this isn’t enough. It has to make you even more eager.”

Moto Guzzi is celebrating its 100th anniversary. Did the idea of bringing the brand back to MotoGP ever come to mind. Kind of like KTM in the Moto3 with Husqvarna and Gas Gas?
“Yes, but it has never really been explored because Aprilia today has a very specific DNA identity. What would be nice to see is the Piagge Group make a huge investment in the future headquarters in Mandello, present the V100 and, at the same time, the 660 series for Aprilia. In the past, it was evident that there wasn’t much incentive in motorcycles. Maybe the ownership was more interested in scooters. Now it’s a historic moment with large investments in Aprilia and Moto Guzzi. It’s great. If Aprilia hadn’t progressed in the MotoGP. We would have been the missing link. If we continue to do our job well, the whole group will benefit. It’s a responsibility that’s right to have. All of this gives a positive incentive.”

So we won’t see Moto Guzzi in the MotoGP?

"Today the races are Aprilia, so with two bikes, right? Who knows with four. If we’ll have a satellite team in the future, why not? And if we could have an 8-cylinder, even better,” he said laughing.