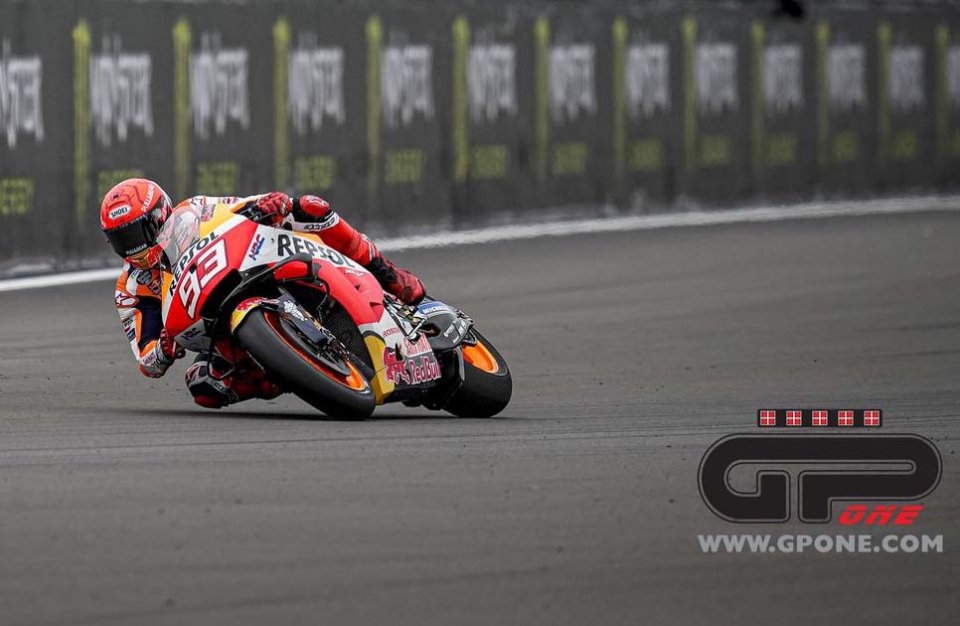 A second row with a fifth time is not what the fans expect from Marquez, especially since his teammate, Pol Espargarò, got the pole. Yet, the eight-time world champion’s statement that this was his goal is unsettling. However, he explained his reasons and clarified everything.

“Step by step, I’m riding better. I feel better, and we’re improving little things, and we’re close to the best,” he explained and  added: “The most important thing is that we’ve improved. We’re improving on all circuits. And that’s better than a single win at the Sachsenring. In Austria, and now here, at Silverstone, we’re competitive. Then we’ll see about Aragon and Misano, the upcoming circuits. Honestly, the best session of this Grand Prix was the qualifying session. A fifth time and the second row were the target. I’ve put aside some energy for tomorrow.”

Also since he hasn’t fully forgotten about his fall at 270 kms/h on Friday.

“My eyes are much better now. It was stupid, but it bothered me a lot. I suffered a small injury because I rubbed them, and I had sand on my cornea. They made me keep my eyes closed for the entire afternoon  but, like I said in qualifying, they weren’t a problem, unlike yesterday when they were tearing up a lot. Then, of course, there are a bit of the after-effects of the fall. I’m a bit sore.”

Today Pol demonstrated that the bike works well but the important appointment is tomorrow.

“Pol is a fast rider. We were fast from the start, so there’s a good opportunity here. I congratulated him because the results cost him more than he thought. The Honda is a critical and difficult bike. I currently can’t fully take advantage of it, but we have to work to make it more competitive.”

Among the tests on adaptations today, there was also a scooter-type rear brake.

“Yes, today we tried the thumb brake, but I didn’t feel comfortable, because I don’t use it much. For qualifying, I went back to the normal foot brake because I feel safer and a bit faster too.”

Did you by chance consult the ophthalmologist who operated on you years ago?

“He was available, but there was no need for it.”

How does it feel to be Marc Marquez and not be able to go one hundred percent?

“It’s difficult, but you have to accept it. Of course, I can’t ride, I make many mistakes but, little by little, we’re closer even in various circuits. What we don’t need is to be fast on one circuit and not on the other. But it’s better this way than winning one and missing three.”

Yesterday’s fall was impressive in terms of speed. Where do you place it in your fall ranking?

“Ranking of yesterday’s fall? I have to think about it... it was a strange crash. On the first lap, the tire might have still been a bit cold, and I was slower than usual... I don’t know. The Jerez one in 2020 was certainly worse.”

Do you have a strategy or predictions for the Grand Prix?

“Everything will depend on the pace of the race. If it’s fast, it’ll be very stressful for the tires. The slower they are, the more chance to manage them. It’ll be interesting, because Quartararo and Bagnaia have a good pace, then there’s Pol, me, Martin, Miller, we have a similar pace. It’ll depend on the pace and strategy. What do I expect? A podium would be a good result, thinking of a victory wouldn’t be realistic.”