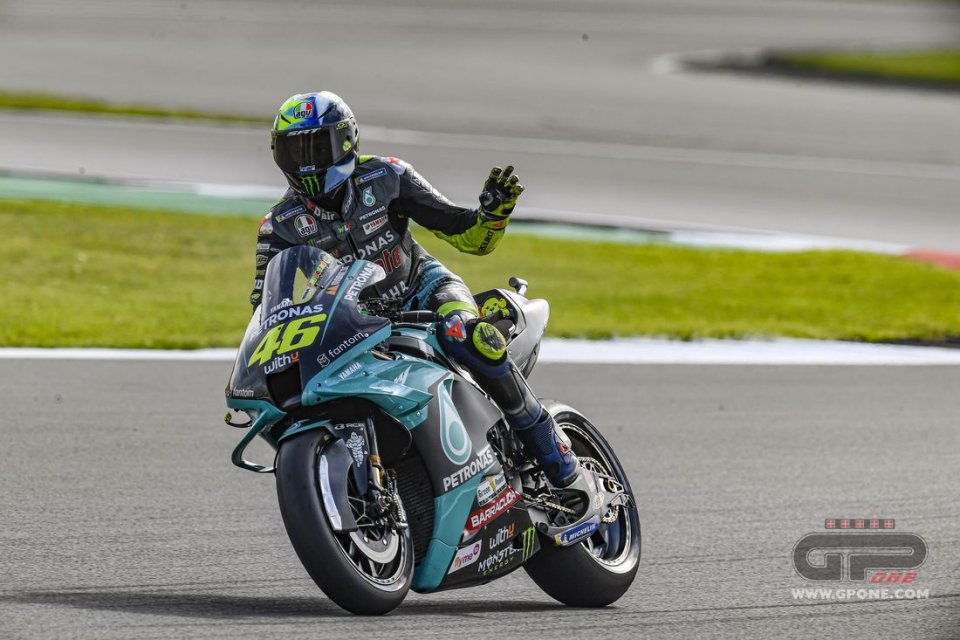 Valentino Rossi was in desperate need of a good performance in qualifying, but also a weekend in which to be consistently fast and this time round he’s had both. Eighth position on the grid is a good step forward for the Doctor after his recent difficulties and, even if it does not allow him to dream big, it is the right point to rebuild a season that has given very little satisfaction so far.

"Who knows, maybe it's thanks to this track that is so technical and that I really like - smiles the Doctor - When a rider goes fast it's thanks to many aspects, maybe at Silverstone I'm competitive because I enjoy it".

How did today go?

“We continued to improve, since the morning I worked well on both the setup and the tires. In the last two free practice sessions and in qualifying I was always in the top 10 and this makes me happy, I ride well and have good potential, in some points of the track I am particularly fast and I enjoy it, it is truly a pleasure to ride. I want to continue like this, even if it's not easy ”.

Do you think this Grand Prix could be a turning point for your season?

“The second part has started in a different way from the first, where I expected to go well on some tracks but where I struggled. We found a way to improve the bike to feel more comfortable and in Austria I did two decent races, from now on I hope things will go better. For me it is important to be able to stay in the top 10 and have some good races, because they will be the last for me. Unfortunately, the ones I will remember will be these and not those of 15 years ago when I always won (laughs) ”.

So what do you expect from tomorrow, will it be your best chance of the year?

“It depends, in Qatar I was faster in qualifying, but here at Silverstone I have a better pace. But I also had a good pace in Assen and Barcelona, ​​but then other problems arose in the race. It's the good and the bad of MotoGP: you never know what will happen, even when you choose the right tires (laughs) ”.

Will the choice of tires be essential?

“Before FP4, I was oriented towards the medium at the rear, because the hard is more difficult to bring up to temperature, but in the afternoon, I was faster with the latter. With both it will be difficult to get to the end and you have to understand which one drops better, the hard one is not always more effective at the end of the race. Furthermore, we will also have to see the choices of the other riders, if everyone started with the medium it would be difficult with the hard in the first laps ”.

Is the start the fundamental phase?

“That and the first few laps, I was usually fast at the start of the race, but from the Sachsenring onwards I started to have problems. Since we introduced the front lowering device, it is not easy to adapt the electronics but it seems that we have understood the problem and my feelings are better ".

Today you often followed Bagnaia, did you come to an agreement?

"No. Now everyone makes his own strategy and it is important to have someone in front, but it was nothing we talked about”.

“I was leaning too much. It happens when you push on a MotoGP. I have injuries all over my body. I’ll have to wait and understand my condition. It’s...
14 hours 52 min ago

The calendar for next year has been set and will be made public today. After Kazakhstan, another country enters the World Championship.
21 hours 44 min ago