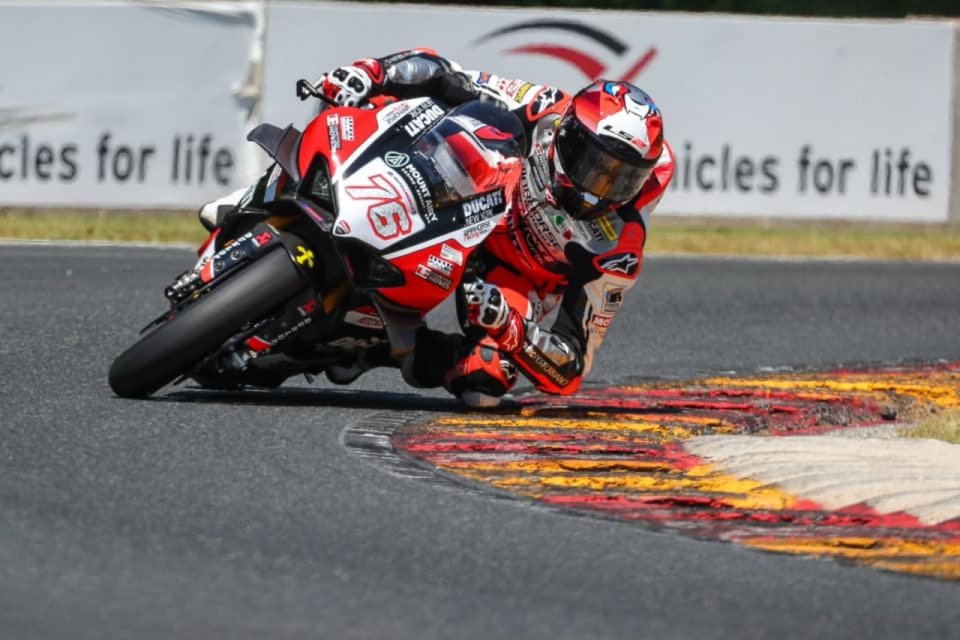 After the disappointment surrounding Ten Kate-Yamaha Racing Tea’s no-show in the Superbike World Championship, Loris Baz restarted his career from the MotoAmerica Honos Superbike for the Warhorse HSBK Racing Ducati New York team, racing with a Panigale V4R. The Frenchman, interviewed during a LIVE by Paolo Scalera and Marco Caregnato, explained the reasons that led him to get involved in the US domestic series, giving his view of the first half of 2021 which sees him in fifth place in the standings with four podiums to his credit.

“At the end of 2020, the main aim was not to compete in MotoAmerica, however, it is proving to be a wonderful experience. I would have liked to continue in the SBK world championship due to the excellent results obtained with Ten Kate, I received offers, but I did not feel like just making up the numbers - he said - a few days before my birthday I received a call from Eraldo Ferracci, who explained the project to me and, after talking about it with my manager, I listened to my heart and decided to accept the offer. Although I arrived late in the USA, I am gradually becoming fond of  the country and the championship. The project is new, there is a happy atmosphere inside the garage, and there is the direct support of the manufacturer. Unfortunately, we were a bit unlucky at the start of the season, now we are starting to get on the right track. The aim is to win the title, hoping to soon rejoin the World Championship ”.

On his debut in the States, and with his massive experience, the 28-year-old Frenchman then gave his personal point of view on the championship which has been managed by the three-time 500cc world champion, Wayne Rainey, for the past seven years.

"Wayne is doing a great job, the championship is returning to the glories of the past, in fact the level of the top-6 is really high - he continued - in the last few rounds the gates have been opened again and the public has participated en masse, with 60-80,000 fans. Also, some of the tracks are old fashioned, just the way I like them having raced in British Superbike. Compared to Europe, the asphalt surfaces are old, as a result they have less grip and this makes it difficult to find the correct set-up for the bike ".

From his past in MotoGP, during the 2016 Sepang tests, the then Avintia Racing rider ended up in the eye of the storm after a sensational and dangerous crash on the straight when the rear carcass of his Michelin exploded.

“I must be happy that I am still alive. I usually end up on the ground due to my own mistake, however, in that circumstance, it was due to a tire under development as Michelin was returning after a prolonged absence. Fortunately, they have made a lot of progress since that episode. At the same time, I got very angry when I read that the fault was attributed to the team, more specifically to the low tire pressure, which was absolutely not true ”.

Not only MotoGP and SBK, in fact, Baz has also had the opportunity to try his hand several times in the Endurance World Championship, a round of which is being held this weekend in Portugal with the 12H of Estoril. Just think that in 2011 he finished the 24H of Le Mans on the top of the podium with YART-Yamaha.

"When I took the number one podium place in the FIM EWC I was just 18 years old, at that time there was a different conception of endurance races. There are unique emotions in which you are sad in 90% of the race and happy in the remaining 10%. Among other things, I was lucky enough to ride alongside my best friend, Jérémy Guarnoni, a more unique than rare moment in motorcycling. It would be great to be back in Endurance riding a Ducati ".

In conclusion, he also had a thought for his compatriot Fabio Quartararo, current MotoGP leader. Both have known each other for almost a lifetime, and Baz didn’t deny having helped him on more than one occasion.

“I met Fabio when his dad asked my coach if it was worth going to the Spanish championship. I consider him a crystalline talent, I'm happy for him, he deserves it given his complicated debut in the World Championship. At that moment I was in MotoGP and, with my help and that of his current manager, we were able to polish’ him. In the choices he made he has been good and lucky. In fact, once he won the first Moto2 race, he immediately signed a contract with Petronas, these are aspects that are part of every rider's career”, he concluded.