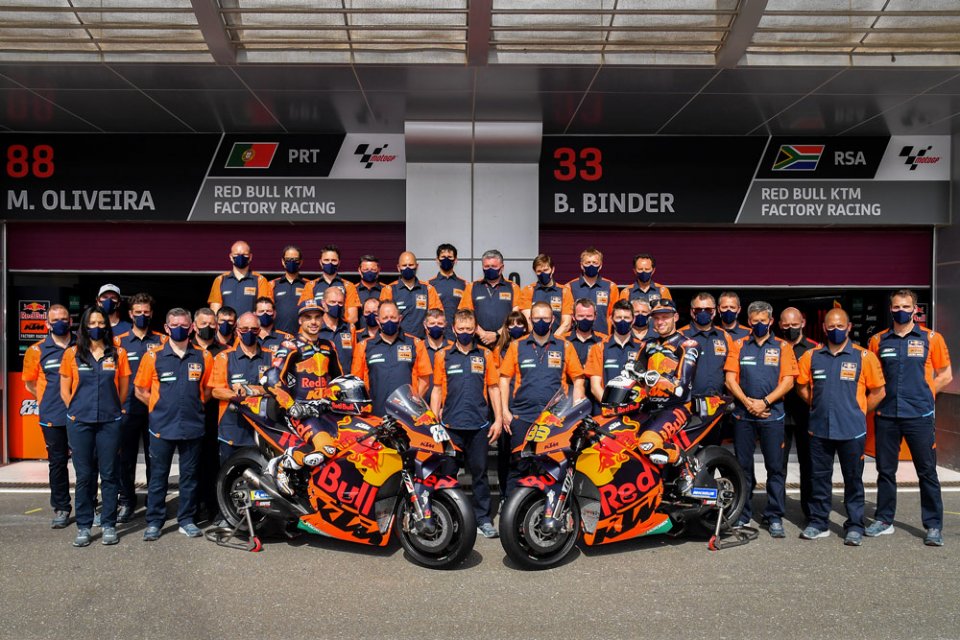 Supply chain, nursery, call it what you want, is the path that leads from the lower floors of motorcycling to the Olympus of MotoGP. A difficult road, which only sees a few riders reach the end, but a crucial one, especially for manufacturers, who can breed their own champions at home and thus have exclusivity (or almost). Saying it is easy, but doing it is something else, because it requires time and resources, both financial and human. In fact, the only one to have succeeded was KTM and the results are plain for all to see.

The Austrians are the only ones involved directly from the promotional championships (i.e. the Rookies Cup) to the premier class, thus they are in a position to identify young talents and help them to grow up in their teams, step by step. As mentioned, we start with the ‘rookies cup', then we move on to the Ajo team (with which collaboration has recently been renewed) for Moto3 and Moto2 and finally we arrive at MotoGP, either in the official team or in the junior Tech3 team. There you have it...

The consequence is that KTM now dominates the present and future riders market. It is no coincidence that Yamaha has tried to make enquiries with Oliveira to replace Vinales, or that several people have knocked on Raul Fernandez's door (the surprise of the year in Moto2), or that someone else is doing somersaults for baby phenomenon Pedro Acosta. They are all men in orange and are the tip of the iceberg of a job done in recent years.

The Austrian company has a system that no one else can rival and which may pay dividends even more in the future. Valentino, with his Academy, does something similar even if on a smaller scale and it's not a coincidence that Ducati is looking with interest at the agreement with VR46 in this sense as well. There are also other teams, such as Gresini or Aspar, which start from the national championships to move riders up to the World Championship, but everyone knows that sooner or later everyone will have to say goodbye to their treasures, which will rightly give in to the attraction of the factory teams.

But KTM no, they can guarantee the entire study course (from elementary school to university) in the same garage. A bit like what happened with Honda with Dani Pedrosa, or again (thanks to Repsol) with Marc Marquez, but these were isolated cases, while the Austrians have turned it into a method.

Sometimes, however, everything does not go in the right direction and Jorge Martin paid a penalty to betray KTM for Ducati; this will probably happen in the future too, but in the meantime the men in orange have a very long rider bench. Binder and Oliveira are two products of the nursery, Fernandez and Acosta as well, but there are also other riders who want to have a place in that club. Like Remy Gardner, with a lot of apprenticeship and then an opportunity (which he has not wasted) to join the club.

That being the case, for the other manufacturers it is grief. Honda is also involved in Moto3 and promotional championships (such as the Asian Talent Cup) but (apart from Ogura) it is not benefitting much. Yamaha would have the ideal partner in Petronas, with its presence in Moto2 and Moto3, but for the moment there have been no riders to promote. Suzuki has always moved as a free hitter, with success, but whoever has taken Brivio's place will have to have the same flair. Ducati has VR46 and Gresini as interesting talent nurseries, but also an attractive bike.

The fact remains that KTM is playing on another field and it is not wrong to say that it can dominate the riders’ market in the coming years. The only flaw may be not having enough bikes for so many talents, but it's better to be able to choose than to have no choice…