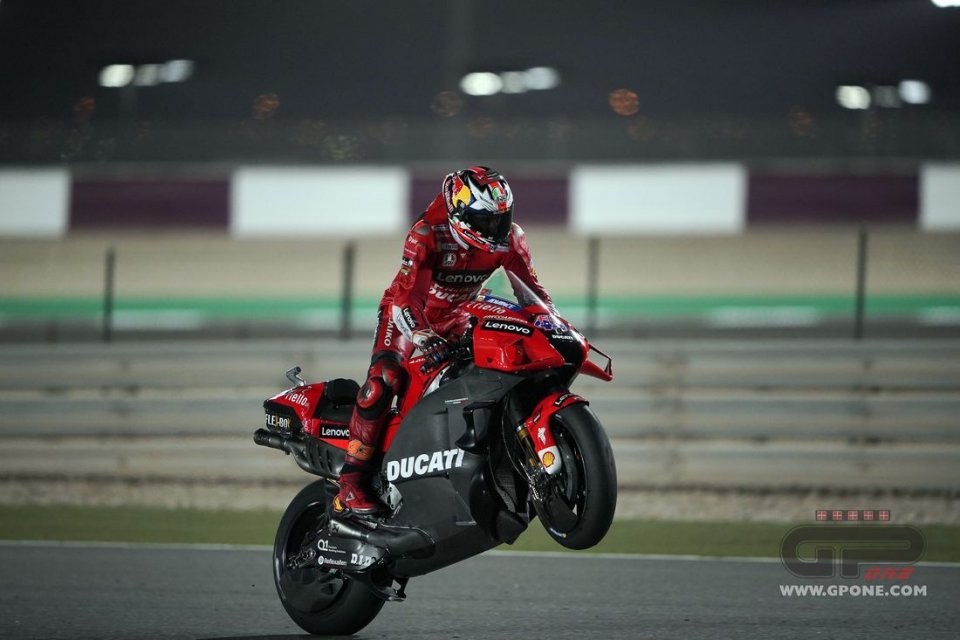 Miller’s time is unlikely to be beaten today, considering the strong wind, so Ducati’s Australian rider will remain the fastest rider ever in Qatar. Joining the official Borgo Panigale team seems to have done Jack well. He now seems more relaxed and serious. A maturity that’s reflected in his performance.

“ I feel good and calm. I can’t wait to start with the first race,” he said. “Honestly, I enjoyed this test. I’ve never been so happy in the MotoGP, but you have to keep your feet on the ground because so many things can happen this season.”

Yet 2021 seems to be the right year for him, and his first MotoGP win could come soon, perhaps in a couple of weeks during the inaugural Losail GP.

“ I certainly have a better chance of succeeding,” Jack confirmed. “I feel ready for the race. Yesterday I did a good simulation, and today I have another one planned. The most important thing is to have increased my confidence with the front, especially in fast corners. Now I’m able to be faster and am able to use the whole track in a way that was not the case before.”

Even the Michelin rear tire that caused problems for so many riders last year now seems under control.

“I don’t remember any particular problems even in last season’s tests, but the Ducati has always worked well in Qatar. We’ll have to wait for more critical tracks like Brno and Misano,” Jack observed. “In the second half of 2020, I adapted well to that tire, and I was immediately at ease in this test.”

All that remains is to take a look at who the most formidable opponents will be.

“The Suzukis aren't bad, both with Rins and Mir,”  he began. “ Then there are the two factory Yamahas, which were fast throughout the test, but the rider who impressed me the most was Pol Espargarò on the Honda. Morbidelli? Not having a factory bike could be a disadvantage on this track, but he’ll be there for the championship. He’s a real rider. He shows his stuff during the race.”

Before leaving, Miller confirmed that h'll also be getting the vaccine: “Without a doubt. We’re very lucky to be able to do it so quickly, especially for us, since we risk a lot by traveling a lot. I think this opportunity goes in the right direction in the fight against Covid.”