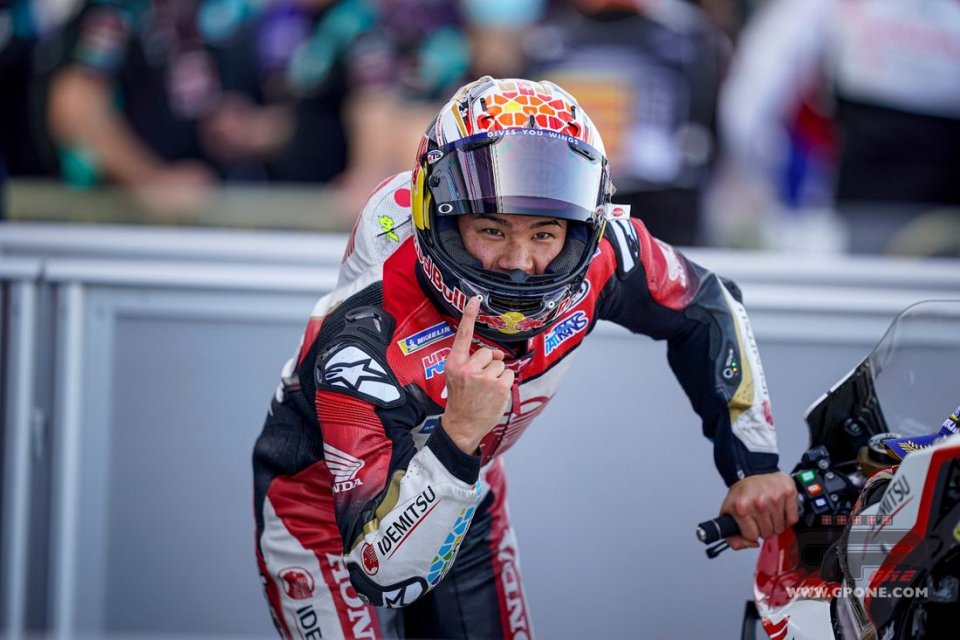 The 2004 Valencia Grand Prix was the last time a Japanese rider – Makoto Tamada - started at the front of the grid in MotoGP. Takaaki Nakagami did it today in Aragon after 16 years and he couldn't be happier. His smile said it all about the feelings he felt right now.

“I think tomorrow I will have a good view without any rider in front of me - joked the LCR rider - It's an amazing feeling, I didn't expect to fight for pole position, Maybe our target was if we can fight for the front row it's enough. This weekend so far, we are quite competitive. When I saw the first time under 1m47s, it's a good feeling".

How did you improve so much?

“Our pace is quite competitive and it was a surprise for us because we didn’t change anything from last weekend. The only thing was working with the medium tyre on the rear and it went well. We are not decided which tyre to use for the race but good pace, this is the most important thing.

Have you already thought about a strategy for the race?

“I have some strategy but these two guys (Morbidelli and Rins) are really strong at the beginning of the race, I hope I can make a good start.”

What if it happens?

"I have another secret in my pocket, but I won't tell you this (laughs). Of course my dream is to win, but the most important thing is not to think too much about the result. I want to enjoy the race because I have the first pole position and on Thursday we announced a new contract with Honda, so now no stress, more freedom.”

Is there also a thought for the championship in your head? You are only 29 points from Mir.

You have grown a lot this year, how much has the presence of Takeo Yokohama, the head of HRC, now more by your side since Marquez's injury, influenced you?

“Takeo-san has been in my garage a lot, helping me and I felt the support of HRC. My bike hasn't had any major changes, apart from the suspension, but Takeo showed me Marc's data, he explained the differences between him and me. I tried to adapt and it was not easy to succeed. I gradually understood the riding style used by Marquez ”.

“I worked well, the team and I never gave up, even though we are not a factory team and we don't have a factory bike. If Marc had been here, he would have taken pole, he remains number 1 for me. Trying to compare myself with him, to get closer to his performances, gave me great energy ”.

Do you have everything to aim for victory now?

“Thinking everything is perfect just makes you lose your way. Tomorrow will be a very important day for me, I'll just have to think about racing, because I know I can keep a good pace. I will have to repeat the performances I did in practice, then a great result will come. I usually lose at the start of the race, only to recover at the end, so starting from the front will help me. "

Are you superstitious, do you have any particular ritual?

“Until a few years ago I had a lot of them, so I wasted time thinking about what I had done wrong. Now I've reduced them in number, I don't have as many as Valentino (laughs). I put on right gloves and boots first, the same for the undersuit, that's one thing ”.