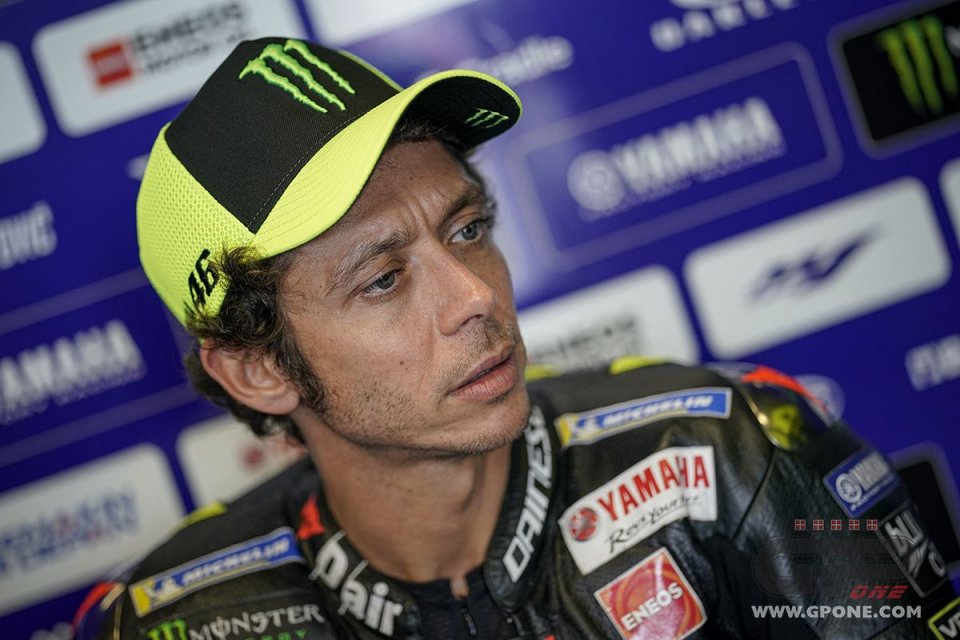 Valentino Rossi witnessed Marc Marquez's umpteenth step towards legendary status today. The Spaniard scores his eighth world title, as Rossi continues to suffer from the same ongoing problems with his M1. Valentino is unable to solve the issue of excessive rear tyre wear that has been conditioning his races for a while.

A situation that Valentino struggles to accept, as rather than fighting for the podium positions, he finds himself having to settle for eighth place, the last Yamaha across the line, a good 20 seconds from the two riders who lit up the track with their duel, namely, Marc Marquez and Fabio Quartararo. Speaking of Marc, Valentino has drawn a comparison with his own past feats.

"Marc like me in my best moments? He's dominated this year, just as I did in the years I was in top shape. He only made a mistake at Austin but, aside from that, he's been almost perfect. I don't think he'll struggle to reach nine. I'm sorry because I've thrown two or three titles away during my career. Actually, I threw two away and one they made me lose, but it's three anyway. I fear he'll soon catch me on 9!".

So what went wrong today?

"Unfortunately, the race went in a similar way to recent races because I had more or less the same problems. After a few laps, I started to suffer with a lack of rear grip, gradually losing both grip and performance, so I had to slow. Another hard race. A pity because we'd found something good in warm-up and were doing well on the used tyres too. We modified a few things, and this helped us find a little more grip, so I expected to run quite a good race. I wanted to use the same tyres for the race, just fresh ones, but it didn't work".

The problem seems fairly small, but a solution is unobtainable.

"That's the problem and, when you're riding, it's quite clear. The tyres lose a lot of performance in a short lapse ace of time. Every time I lean over, I'm suffering. It didn't go that badly at Silverstone, but we also did well there in qualifying and then suffered in the race. We know we have to do something and  we'll already try in Motegi. The top three were just faster today, but I was quick in warm-up. I was convinced I'd be able to fight for at least fourth against Dovi or Rins, anyway, but it didn't work out that way."

Do you think a very different approach is needed in terms of defining the bike setting?

"We need to change something, and we're trying, but things are not always working. We talk a lot during post-race meetings and will try again at Motegi. Naturally I'm very disappointed because I want to try and be faster. I was optimistic after the warm-up.2

Do you think Fabio can be Yamaha's future rider?

"Fabio is very important for Yamaha's future. I expected him to be quick, but I'm sure no one in the paddock thought he'd be as quick as he has been. He's always been fast, ever since he was very young. He's a talent, and I think everyone will try to have Quartararo on their team next year. For 2021, if they're not crazy, Yamaha will do everything they can to keep Fabio on the M1".

At least you had the satisfaction of Luca's result today.

"On a difficult day, Luca's win is really satisfying, and I congratulate him. It's really cool to see. I hope that he can finish the season well, in order to be ready for next season and fight for the title. It would be great to see a Marini - Marquez battle in 2020!"