Only six days of testing, with times that need to be scrutinized, data to study, and moods to interpret. The preparation for 2019 passed in a flash, and, in just a week, there'll be no more time or space for hope in Qatar. Today's Moto GP doesn't offer much time. You have to already be prepared with just a handful of days between Malaysia and Losail.

The winter tests have given us an idea of the progress of the various bikes but, as the riders continue to repeat, only on the weekend of the race will all the cards be laid out on the table. So, while we countdown the hours that separate us from the first green light, the questions are many.

So many doubts to which we'll try to give some answers.

DUCATI. FROM TIGER IN MALAYSIA TO KITTEN IN QATAR?

Sepang (almost) seemed like a miracle. Instead, Monday night in Qatar, Dovizioso was shaking his head and Petrucci, the best Ducati in the standings, was only 9th. If we put it this way, it would seem lik e a dangerous involution, moreover, on a track where the Desmosedici had won a victory and three second places with Andrea in the past four years.

Standings aside, it's difficult to give a bad grade to Ducati, and one might be tempted to say that its riders were in hiding, first and foremost, Dovi. The fact that everyone returned home with soft tires in the pit still untouched says a lot about the lack of interest in the performance of the qualification lap. If anything, it was Danilo's race simulation that made it clear that the Ducati was strong, without ifs, ands, or buts.

The rider from Terni was tough in the long run, and this is the most important thing. Even the novice, Bagnaia, although not explosive in the fight against the stopwatch, proved to be constant on the pace. Andrea had several more doubts, but probably a week will be more than enough to eliminate them. 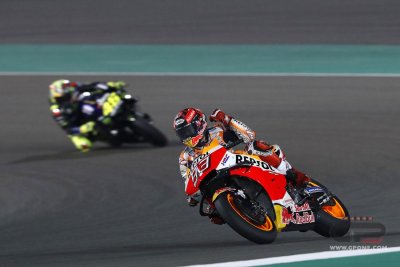 The engineers from Tokyo are always a step ahead, and they were smart to start developing the RC213V practically already in the middle of last season. They couldn't have known that their pit would have ended up being  an infirmary. But not even these unexpected events managed to take them off guard.

Despite having to deal with his shoulder, Marquez spared no effort and is sure to arrive at the GP in much better conditions. Lorenzo, despite having to skip the tests in Malaysia, already seems at ease on the Honda.

The priority was to fight on equal terms with Ducati at top speed, and the results in Qatar were very encouraging to this regard. Crutchlow complained of a lack of confidence from the front, but Marc said that there weren't any problems, and, however, they would be resolved.

It could have been a difficult winter, but it instead seemed a success across the board.

YAMAHA. IS THE WORST OVER?

Seeing four M1 in the first 7 places in Losail, you'd probably answer "yes". The pace of the riders isn't bad, even if a few tenths of a gap from the best still seems to exist. Vinales is happy, so is Valentino, despite some highs and lows, and the newcomers Morbidelli and Quartararo were a confirmation.

In other words: progress was made, but they're still in pursuit at Iwata. The mess ups from recent years were paid through the nose, and it's useless (and naive) to think that a winter is enough to bring the M1 in front of everyone.

The real question, however, is another. The winter tests were held in Losail (where Rossi was on the podium last year a few tenths from Marquez and Dovizioso) and in Sepang (where Valentino gambled with the victory at just a few laps from the finish), two circuits that were Yamaha's friends even in dark times. More tracks will be needed to really understand the progress of the new bike.

DOES SUZUKI HAVE EVERYTHING IT NEEDS TO WIN?

The GSX-RR is a nice bike, there's no doubt. Alex Rins seemed ready to play the leading role right from the first race, and there are few doubts here, too. The problem are the opponents they’re going against and their firepower.

Let's face it, everyone likes Suzuki because it's a team that focuses on young people and plays as an outsider. But, this time, it seems to be up there along with the best. Rins showed that he could hold his own already last year. Now he simply has to do it. He rightly says that there is no hurry for the first victory, avoiding any pressure and stage fright. Time is on his side, but the desire to already amaze everyone in Qatar is there… and how.

APRILIA. IS THIS REALLY THE YEAR FOR A TURNING POINT? 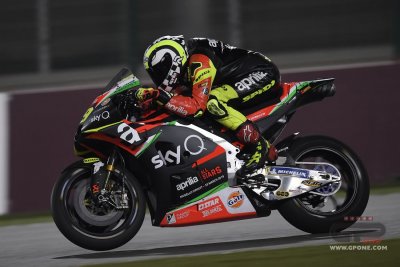 The alarm clock seems to have finally gone off in Noale. A new internal organization, a test team worthy of the name, and (finally!) new material to try in quantity, without seeing Frankestein bikes in the pit.

We're still not calling the results a miracle, but the important thing is that they’ve taken the right path. The RS-GP slimmed down. Aleix Espargarò had some flashes in the flying lap, and Andrea Iannone is becoming familiar with the bike. Bradley Smith has proven to be a precious pawn. All this bodes well.

But we're just at the beginning, and there is a need for corroboration in the race.

KTM. LOTS OF MONEY, NOT MANY RESULTS?

Pol Espargarò's 7th time could suggest a positive test, but it's difficult to apply this adjective to KTM's winter. Zarco has never been among the main players. Syharin has sunk into the lower parts of the standings. Oliveira is, logically, the novice with more problems.

The efforts made by the Austrian team are out of the question, but the RC16 project continues to struggle to take off. The Moto GP is a beast that is difficult to tame for everyone, but it was reasonable to expect something more. There are 19 GPs to show that KTM can get close to the best.

As the situation remains in a state of constant evolution, new dates for the French GP and the recently-postponed Gran Premio de España cannot be...
16 min 28 sec ago

“It would be great for the sport and the country if the interest of the past returned. Hayden was one of my heroes and I cried when he won"
6 days 20 hours ago

The 2020 MotoAmerica Series round at Michelin Raceway Road Atlanta has been postponed to the July 31-August 2 weekend due to the ongoing COVID-19...
1 week 26 min ago

The 7-time AMA Superbike champion charged in New South Wales. Arrested and then released on bail of $50,000, his passport was revoked.
1 week 15 hours ago