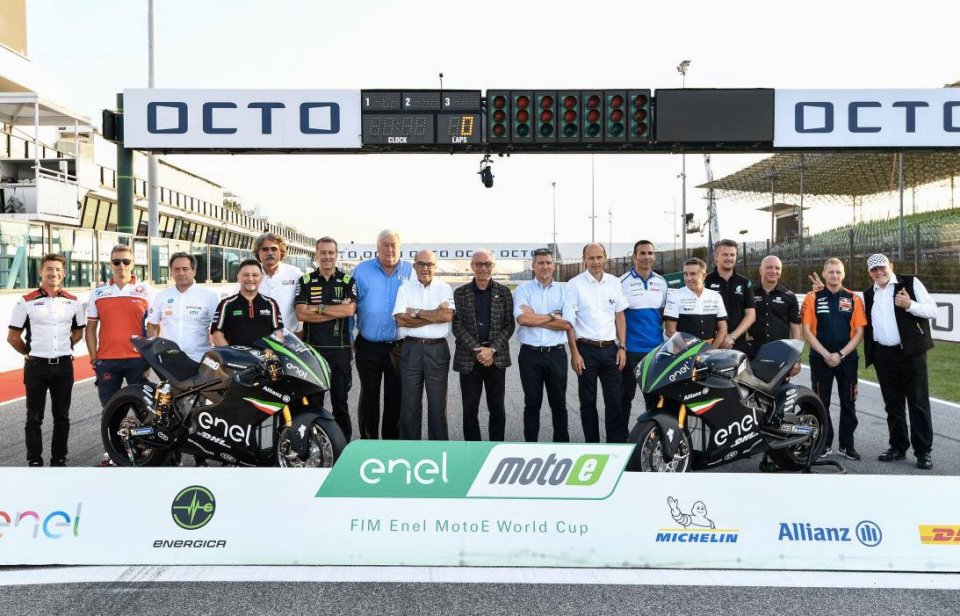 The MotoE has only just been created and is already a hot topic, everyone having their own opinion, whether good or bad. There are essentially two points of view: those who cannot image seeing soundless, oversized bikes on the grid and those who are excited by this new frontier.

Whether you like it or not, the electric bikes are all set for their championship (a World Cup to be precise) and the starting grid is beginning to take shape. In recent months, people wondered whether it would field former frontrunners, in order to gain attention, or be a 'real' series, with young, fast riders. Looking at the entry list, it looks as if they have done a bit of both.

The star, as things stand, is definitely Sete Gibernau who, at 46, has decided to put his helmet on and get back in the mix. Alongside him, the likes of Nico Terol (125 world champion), Randy De Puniet and Alex De Angelis, all well-known names who know exactly how to twist the throttle, the Frenchman currently test riding for KTM in MotoGP and the Italian doing likewise for NTS in Moto2.

But if we're talking about pure speed, then the Sepang circuit team has done right in hiring Bradley Smith. The Brit reached the top ten on a couple of occasions with the KTM in MotoGP this year, and will work as test rider for Aprilia in 2019. The same can be said of Xavier Simeon, who may not have set the world alight on the Ducati in MotoGP but is far from hanging up the towel.

Then there are those who have stood out in their own particular championships, Josh Hook and Niccolò Canepa for example, both Word Endurance champions. Two more riders who don't hang about.

The MotoE also provides an opportunity for certain riders to return to the world series, after only brief appearances in the past. Matteo Ferrari is one such rider, having competed in Moto3 a few seasons ago without much luck. Also Hector Garzo, Jesko Raffin and Eric Grandado, names that real fans will recognise, all of whom have Moto2 experience. Then there is Maria Herrera, the only and first woman to compete with an electric bike, her most recent history in Moto3. Kenny Foray, winner of the French SBK championship also features on the entry list.

As you can see further down the list, there are still some open seats, and there may be more surprises in store.

In the meantime, we wait to see the Energica Evo bike on track, for the first three-day test at Jerez on 23 November. Each time will have just one bike available, so two-rider teams will take turns on track. The schedule will of course have to allow for battery recharge times, so teams will not be out on track all day.

As for the championship, racing will take place at Jerez, Le Mans, Sachsenring, Red Bull Ring and Misano, with two races over the San Marino GP weekend.