During the German weekend on the Sachsenring, rumours flew in the paddock and the media centre that 2018 could be the last Grand Prix of Germany here, with the Hockenheim and Nürburgring circuits ready to take its place.

Many could be pleased about this possibility, but not Marc Márquez, who has set up his own fiefdom in Saxony, winning for the ninth time in a row on this track, including the 125 and Moto2 classes. For the six-time World Champion, this is his fifth win of the season and for now, no possible antagonist has been found: the number 93 rider is the fastest, in the best form and his Honda RC 213V always has outstanding support from HRC.

The question is: does he make the difference or is it the bike? The answer is simple: Marc continues to win while the other Honda riders lag, crash and retire. On the Sachsensring, the second Honda in the points was ridden by 'exiting' Dani Pedrosa - eighth - Crutchlow ended up in the gravel, as did Nakagami on a black day for team LCR, Bradl and Luthi finished outside the top 15. So there you have it: number 93 deserves the overall championship leadership with his 165 points. The Spaniard says that he is not thinking about the seventh title that is getting closer and closer but, to be honest, no one really believes him.

Since this is a championship full of episodes and unexpected events, Márquez’s rival can only battle for the second and third step of the podium in the overall standings. The drive and consistency of Valentino Rossi have been rewarded, second across the finish line, with a Yamaha that struggles with problems connected to the electronics on the factory M1. Number 46 brings all his experience to the track and follows 46 points behind in the standings, not a lot of points, although the cherry on top is missing, namely a win. In the same garage, the odds on Viñales, like his confidence, are getting better thanks to his third place finish on a nice weekend for the Yamaha camp.

Considering the premise (and the promises), we certainly cannot assess the Ducati weekend positively, at least not the factory team. The first Desmosedici to finish was piloted by Petrucci with the Pramac GP18 and Alvaro Bautista finished fifth, grabbing some limelight for next year (the Spaniard still does not have a definitive contract). Lorenzo paid the price for the wrong tyre choice, destroying the soft front and Dovizioso was never in the battle for the podium. Before the summer holidays, they will need to take stock of the situation in Borgo Panigale because, once again this year, the title is moving in a different direction, with Dovizioso a distant 88 points from the leader.

Johann Zarco’s season, ever since he announced his future with KTM, has deflated, as has the performance of the entire Tech3 team – something that should be investigated since it appears somewhat suspicious. KTM has had injuries and DNFs, with only Bradley Smith bringing home the loot for the Austrian manufacturer.

Despite an excellent start in free practice, the week ended badly for the Suzuki team, with Iannone twelfth, involved in the crash that eliminated Alex Rins from the race. A lot of hard work is being done in Hamamatsu too keep up with the leaders and this time hard luck had a hand in things. It was an unlucky three days for the Aprilia duo as well: Aleix Espargaró had a helicopter trip to the hospital after a bad crash in warm up, while Scott Redding finished in the points, exploiting the troubles of others. In Noale they will also have to take a deep breath, work things out and think about how to react, because the remainder of the season will pull no punches for anyone, as the manufacturer standings confirm. 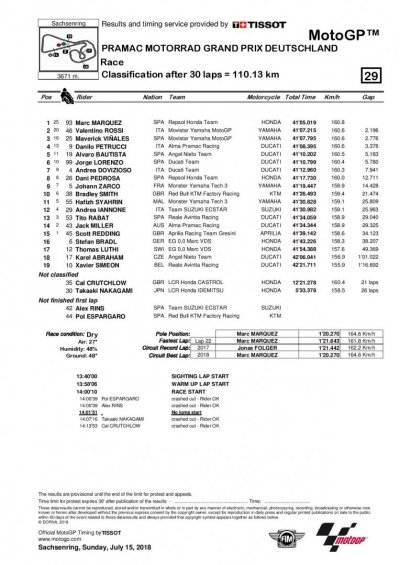 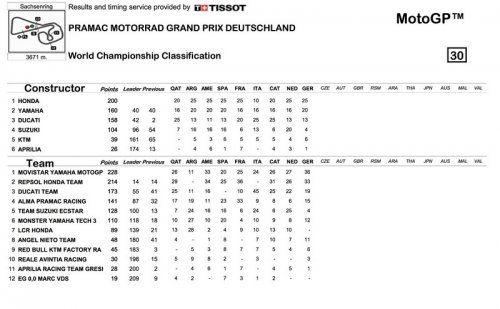 Dorna signed from 2022 to 2026. The Ricardo Tormo circuit will alternate with the others on the Iberian peninsula but will remain the last race of...
6 days 2 hours ago