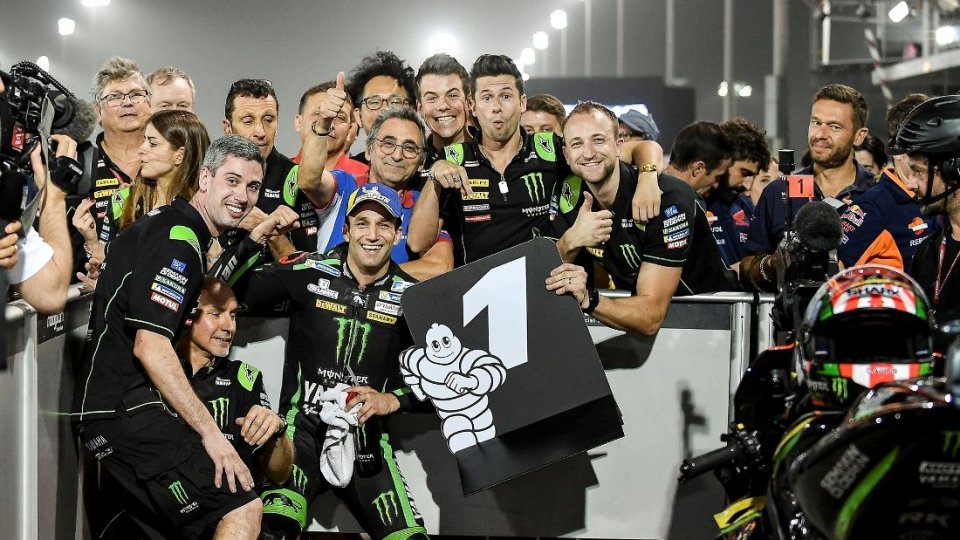 In the Qatar night, there is one M1 that shines brighter than the rest. It isn’t Valentino Rossi’s, nor is it Maverick Viñales’. We are talking about Johann Zarco’s Yamaha. The Frenchman put in a textbook performance, managing to break the record set ten years ago by Jorge Lorenzo.

If everyone expected to see a Ducati at the front in Losail, the team Tech3 rider threw a spanner in the works. And to think that in FP4 he had even taken a spill. In any case, it was a problem that did not shake his confidence.

“I am not one of those riders who manage to go fast straight away after a crash – Johann began – but when I started qualifying with the new tyre, I felt good. Then, with the second tyre, I went out on track behind Dovi and Iannone, but they slowed down on purpose, because no one wanted to give the other riders a tow.”

So Zarco decided to go his own way.

“Initially, I tried to stay behind them, keeping the tyre warm, but then I told myself to go off on my own and push to the limit. In the end, I must say that I am surprised by this pole position here at Losail.”

Now it’s up to the track

“Being the best in qualifying means nothing – Zarco warned – The only thing that counts is the race and right now I am lacking the pace for the win.  However, maybe I’ll be able to find it tomorrow, also because starting ahead of the rest is an important chance to try for the win.”

Zarco is therefore confident, leaving his troubles from Saturday behind.

“When I went out on track Friday, I was the old Zarco – he recalled – in other words, a rider who gets nervous when the bike starts to slide around. Today, however, I regained the confidence of the tests and I am sorry about that crash I had in FP4.”

At the moment, the tyres are still keeping everyone in check.

“Compared to the tests, the conditions were different, plus there was a lot of wind today – the Frenchman analysed – I was definitely able to find a good compromise with the bike. I saw a lot of riders at the limit with the used tyre – he concluded – Maybe the soft tyre could become the best option, although we’ll have to see how it performs if the temperatures drop in the evening.”

First weekend of racing for the 300 category that gave us two exciting and very tight races. Championship standings congested with Carrasco in 4th...
16 hours 40 min ago

Antonellini: “We knew we were in the wrong, and we were ready to pay a fine, the expulsion is excessive. I myself have seen Dorna's men without masks...
22 hours 5 min ago

The rising star of the MotoGP is a fellow citizen of the mayor of Nice, Estrosi, who received as a gift yesterday the Pernod with which he competed...
2 days 1 hour ago

"It's great to go back to racing after watching the MotoGP races. In the heat I had problems in the Barcelona tests so this morning I tried something...
2 days 17 hours ago

The technicians unsealed the engines without communicating it, the FIM Stewards recognized the good faith but still punished the team
2 days 21 hours ago

Twelve apartments available for people in difficulty. "The best way to carry on the legacy of the Kentucky Kid," said the mayor of the city.
3 days 21 hours ago

Manuela, wife of the rider from Romagna and a permanent presence in the paddock by his side, will not be in Spain due to the Anti-COVID rules, but...
4 days 22 hours ago