Marc Marquez was transfixed in front of the monitor in the Repsol garage, forced to follow the last part of the race from pit lane after blowing the engine on his RC 213V, smoking after a violent acceleration on Hangar Straight: the Spaniard had lost the championship lead, but to whom?

Andrea Dovizioso, who had shaken the number 93 Honda before the white smoke, attacked Valentino who was trying to run away at the front three laps from the end with some unparalleled late braking going into Stone corner, where Andrea braked like no one else could. Riding on two hard Michelins, the Italian battled with Marquez, Viñales and Crutchlow in the early phases of the race and then let loose completely in the second part. Once in the lead, he skilfully managed the gap ahead of the second place rider who, on the last lap, was Maverick Viñales.

With this fourth win of the season, the number 04 Desmosedici rider (no winglets for him) now leads in the rider standings: “I was not the fastest out there today - Andrea says, surprisingly - But I managed to win anyway.” If he managed to win without being the fastest, then we can say that 2017 must truly be the Ducati rider’s year.

Viñales fought hard from start to finish, leaning so low on corners that he was close to falling and managing to snatch second place from Rossi with a bold pass: “Knowing that I didn’t have Valentino’s pace - Maverick explains - I let him go ahead in the early laps. Then in the finale I overtook Rossi, but there was no way to catch Dovizioso. In any case, I am happy with second place.”

A great third place finish for Valentino who made a perfect start from the second spot on the grid and led for about 17 laps in the three-hundredth race of his career in the Top Class, demonstrating just how agile and in form the factory M1 machines are at Silverstone: “I thought that I still had more life in the tyres - Rossi reveals about his two hard Michelins - but in the finale they deteriorated. I am happy about this podium, though.”

The rider who really wanted a spot on the podium and tried with all his strength to get there was Cal Crutchlow, finishing fourth today on his team LCR Honda. Cal was playing on his home pitch and he was cheered on loudly by the English fans. Starting well and finishing fifth was Jorge Lorenzo, riding a “winged” Desmosedici GP just 3 and a half seconds behind his teammate and race winner, number 04. In any case, the Majorcan was stronger and bolder on the hard English braking sections.

Johann Zarco finished sixth, never quite able to maintain the pace of those on the podium, with the same true for Pedrosa, finishing seventh but never among the protagonists. Eighth place went to Scott Redding, another hometown hero, whereas Alex Rins finished ninth, the first of the two factory Suzuki machines.

Alvaro Bautista was tenth, Pol Espargaró eleventh with the KTM who, after crossing the finish line, took a hard fall to the ground after being thrown from his bike. Tito Rabat beat out Abraham for twelfth place, with Barbera and Baz rounding out the points zone astride the Team Avintia Ducatis.

An aching Aleix Espargaró managed to take part in the race, but he was unable to ride his Aprilia to the finish. It was a synchronized crash and double zeros for Iannone and Petrucci and a lone crash for Sam Lowes, with neither of the RS-GP seeing the British chequered flag. 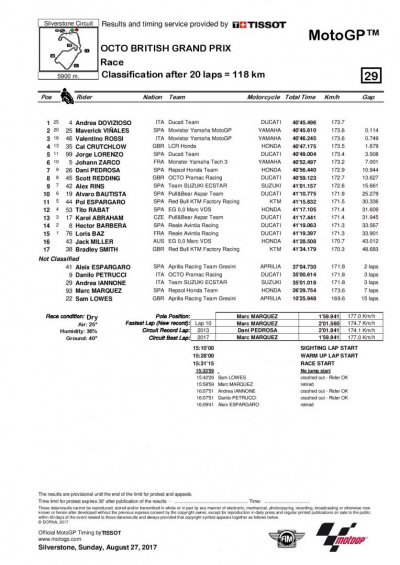 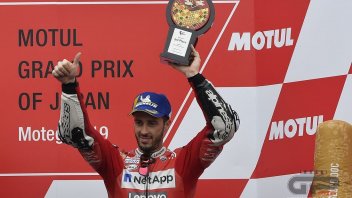 "When things are not going well, you can feel the weight of the name on your shoulders. My goal for 2020? Improve myself"
6 days 17 hours ago

The story starts on the Isle of Man in 1949, Harris has been at the centre of the sport for decades, getting to know the riders as individuals
1 week 4 hours ago