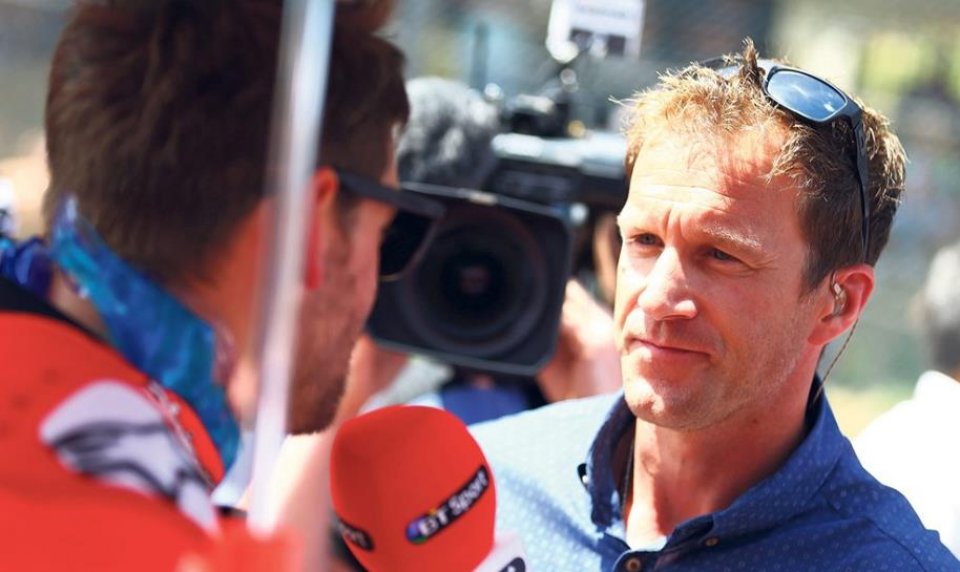 The number 100 sticker on the top fairing of his 999 was waiting for nothing more than to become just a 1, crossing out the two zeros to ratify the final result: Neil Hodgson had become 2003 World Champion with the Ducati Fila, completing a path that had been anything but easy, full of unknowns and changes of scenery. 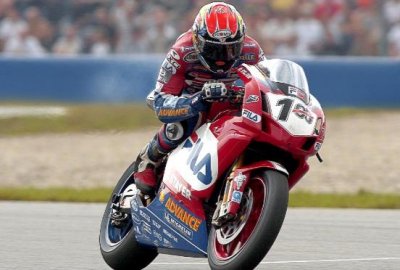 That’s right, because the first years of SBK were not at all easy for the young lad from Burnley who had already taken his first world championship racing steps in the 125 and 500 categories, demonstrating his riding skills…

“They weren’t easy years? - Neil specifies and recounts - rather, the first years in SBK were very difficult. I was coming from the two-strokes in World Grand Prix racing and everyone was talking about me as the new British talent. I was quite honoured by that, but Superbike was tough: 4-stroke factory derivative bikes that I had never tried before on new tracks and guys like Kocinski and Fogarty as my rivals. Being teammate to Foggy did not help: he was The King, the star, multiple champion and English too; I was young and lacked the experience to keep up with the best, especially in the races where the tyres wore out quickly and you had to know how to work a certain ‘craft’…”

Speaking of tyres, you never raced with the sole supplier. What do you think about that?

“I think it’s a good thing in SBK like in MotoGP. First of all, to contain costs and then to give every rider, factory or privateer, the chance to be competitive.”

You won the title with the 999 on Michelins, beating the rivals, Dunlop and Pirelli…

“It was a fantastic season that sealed my career in SBK. With the Ducati Fila on Michelins I had great success in the single races and the sum of them earned me the final trophy. It was an incredible thing to achieve and I can say that I was good enough and lucky enough to capitalise on the excellent package I had.”

Neil, after winning the 2003 World SBK title, you went to MotoGP on a private Ducati: “That was a disastrous experience. First of all, we started the season by losing an important sponsor, so on Team D’Antin we didn’t have the budget we had expected for testing and developing the bike. And then, the private Desmosedici was an ugly beast that demanded time to get to know it and to be ridden at the limit. It was not a fun season for me as reigning SBK champion.”

Nevertheless, Hodgson now enjoys the Grand Prix Motorcycle Racing paddock with a different spirit: “I’m a journalist for an English TV station that sends me to commentate and follow every MotoGP event around the world. I like to travel and it’s fun being in the paddock without any stress. I almost prefer the role of journalist to that of rider, you know, I don’t have all that pressure and the responsibility and there is no risk of crashing (he laughs). I’m happy to speak with every rider and I watch the British riders a bit more closely.”

Crutchlow’s exploits aside, the Britons are still dominating in SBK. Why is that?

“It is a cultural question, but not only that. The English championship is spectacular, rich and competitive. It produces talent ready to embark on the World Championship with the same philosophy as SBK: open up the throttle and pure fun. There are a lot of very fast British riders around who could do well like Cal and Rea, just naming two examples.”

“Not like Cruchtlow, no. Cal won the Supersport title, was in SBK just one year and then he went straight over to MotoGP with a satellite team (Yamaha Tech3). Johnny will be the next Fogarty. He has an excellent home with team Kawasaki; he has a great bike that lets him express his talent and his speed. Rea could be very fast in MotoGP too if he just had a bike worthy of him, in other words, a factory bike. I’m sure of it.”

Neil then continued: “In Grand Prix Motorcycle Racing, Dorna has done a great job levelling the playing field between the factory and privateer bikes, evening out the regulations where they could and spreading the money out to the smaller teams too. The show was guaranteed and the competition made closer. I would propose the same thing with SBK, which needs to take a step back. In the factory derivatives, the over-advanced electronics is costly. Only the true factory teams like Kawasaki and Ducati are able to have it and develop it. I would repeat a rule closer to the factory one, which has been in place for years in British Superbikes.”

It was precisely BSB that relaunched Hodgson, after his first difficult years. “World Championship title aside, the best victory I can remember was at Donington Park in 2000: as a wild card I managed to beat everyone on my orange number 48 Ducati. I wanted to show that the ‘old style’ Neil Hodgson no longer existed. I had left the SBK paddock with all sorts of unflattering comments from people: ‘Neil is a slow rider, Neil is shit’. Winning at Donington was confirmation that I had changed, thanks to my English team manager, Colin Wright from team GSE who knew how to support me. In motorcycle racing you need to have the right people beside you to achieve the results you deserve.”

"It costs too much and I’m staying in Aragon: Covid worries me. I am a bit of a hypochondriac, but Arbolino's case is serious. The first lap was good...
10 hours 34 min ago

Asymtpomatic and in isolation along with a second staff member, who tested negative, even if he worked closely with the technician
1 day 5 hours ago

Roberts will now take the next step in his career and move to another top-level team (Italtrans) in the championship at the end of the season. He...
4 days 2 hours ago

Instead of the usual dividing panels, the MIE Racing Honda team has installed LED panels weighing 5 tonnes in its garage
4 days 3 hours ago

Dr. Mir confirmed the diagnosis of the Le Mans circuit of three toes and a fractured lateral malleolus. The Spaniard has already started his...
5 days 7 hours ago

The South African of Italian origin will line up at the start of the Brands Hatch finale on the GSXR-R 1000 of Brad Clarke's team. The Australian...
1 week 31 min ago

Pol Espargarò: “The best of the KTMs? I want to be in front of everyone.”

“At the beginning of the race, the Ducatis were unreachable. I only thought about the podium at the end. Now it’s fun, but I have to be more...
1 week 3 hours ago