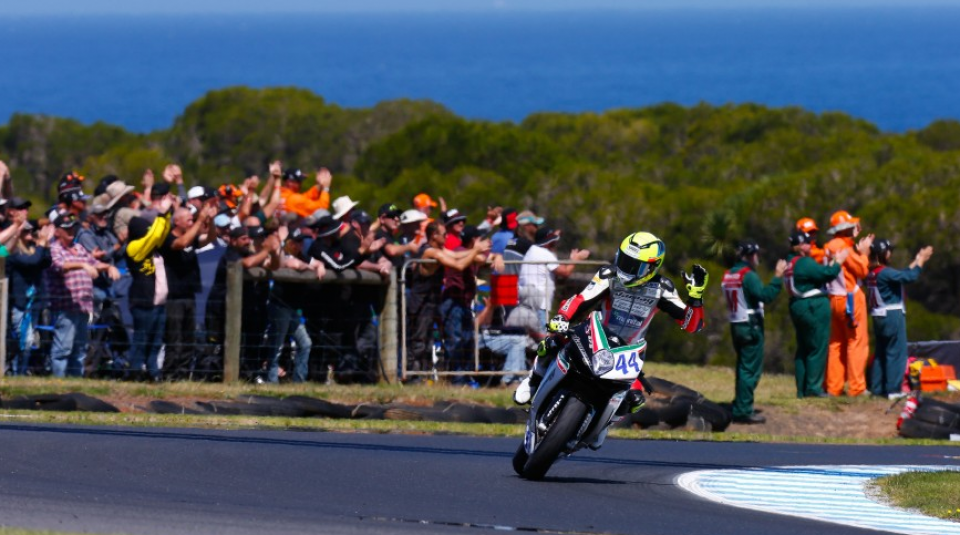 When you are a rider, there are certain sensations and emotions that you never tire of feeling. An example of this is the adrenaline charge that only a win can give you, and today Roberto Rolfo, the rider from Piedmont who is just as expert as he is kind, tasted that joy once again. In fact, the first race of this 2017 Supersport championship went to him by just a thousandth of a second; a trifle that took him and his MV Agusta to the top step of the podium. “The experience of the entire situation this weekend was special – Roberto analyses – both because of the dislocated shoulder during the tests at the beginning of the week, where in any case we were fast, and because of the relationship that has been formed with the MV, a bike that I have loved since 2013 when we made our début together and took some podiums. I like it because you ride it like a race bike. The period that I remember most fondly about racing is when I was on the 250 because of their flowing ride, and the MV reflects that riding style a lot, unlike the other factory derivative bikes.”

After a troubled season like 2016 was with the manufacturer from Varese, this year the start was the best possible and number 44 himself explains the secret to all. “On the team everything changed and the newcomers made sure we would be able to do well straight away, taking full advantage of the bike. Today I knew I had a good pace, but the shortened race to 15 and then 10 laps had made me think negatively. Instead, after a bad start I came back well and once I had reached the lead group, I tried to manage my race in view of the finale. In this phase I was able to discover the points where I was faster than the others, for example, the first sector where I then attacked. These 19 years of career came in handy for something (he laughs)! This is a special win for various reasons, the most exciting ever.”

Also exciting because of a breathtaking last lap that began with contact between Caricasulo and Cluzel and ended with the battle down to a thousandth between the winner and Mahias: “I didn’t see the situation between Caricasulo and Cluzel because I moved into the lead on the second turn, but I heard Mahias’ bike very well on the final stretch. We touched twice and the second time I ended up in the grass. In fact, we were also reprimanded by race direction. Anyway, no problem, it was a tense situation and he probably didn’t even realise he had sent me into the grass. At the beginning I thought I had won but then I wasn’t sure. Luckily, in the garage I saw P1 and it was fantastic. Who do I dedicate the win to? Last season was truly difficult. One of those that can really get you down. However, I never gave up and neither did the team. In fact, they had the ambition to try again and give me another chance, so I mainly dedicated it to them and to my fans.”

And so, in the fifth Supersport season, the first triumph has arrived, thanks in part to the many secrets of the category that in four years (and one race) Rolfo has made his own. “I have always really liked Supersport, first of all for the engine size which I have always preferred to the one thousand because of the riding style. Over these years it has become more and more professional and organised, even being able to work on the bike a lot in terms of electronics and braking. And then, it is always very heated and close. This year there are a lot of fast riders. This weekend Jacobsen was fast consistently even if he struggled in the race and made some mistakes. I did not expect him to be in difficulty since in practice he had been really fast and in general he is a dangerous rider on any bike, with excellent drifting control too.”

Now it is time to celebrate, but tomorrow thoughts will turn to the second round of the season in Thailand, where the 37 year-old rider from Piedmont will seek further glory. “I like the track and in some places I think that the MV has an advantage. We need to work on our top speed on track in general, but I love warm locations so I want to do well. We have the potential to be consistently among the leaders, so that remains our goal. I feel like I am in great form despite my years. In fact, for certain things I am better now than when I was twenty. I continue training on my own, doing sprint training to combat my age and the efforts that a four-stroke bike demands.”