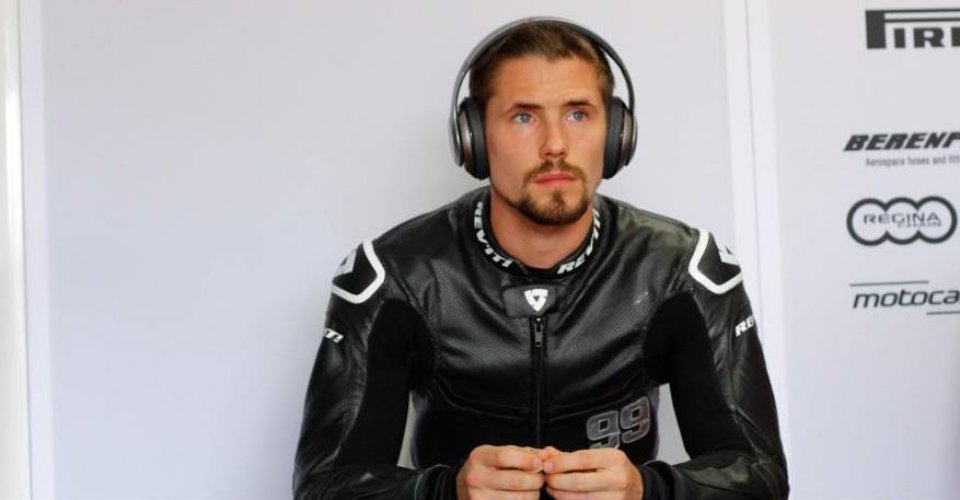 Despite his young age, twenty-three year old Patrick Jacobsen decided to take on a more mature appearance, dyeing his hair a colour similar to a racing Mercedes: “It's an American thing. I want to feel more like an adult and make an impression on the fans, dyeing my hair grey/silver. Maybe I'll go back to blond, but not purple, that's a teenager's colour. I want to be an extroverted rider that the public likes.”

The NFL American football teams from New York, the Giants and the Jets, are struggling to win in every game. What do you think the reason is?

“Oh, I have no idea! I couldn't care less about American sports. I follow some European soccer, but my interests are in bikes.”

And yet, PJ is the typical, all-American guy who, from his earliest years, began on a dirt track, encouraged by his father, a talented racer in that speciality. The dirt oval on his family's property was perfect for his needs, his heroes were Scott Parker and Chris Carr until 2006 and then something changed: “I had already been in Europe with the Red Bull Academy and in 2008 I did a wildcard in 125 at Indianapolis. After a few years here and there, I began in 2014 with Kawasaki in the Supersport world championship.”

Then came 2015, the year in which Patrick managed to finish the 600 championship in second place, despite a bike and team change during the season, bringing home 2 wins and another 5 podiums on a Kawasaki ZX6R and a Honda CBR.

Therefore, hopes were high for a great 2016, but…  “This season was very difficult for me. I had hoped to do better. I signed with the team late. The Honda Ten Kate programme in Supersport began in late January and we did not do enough testing to be ready for the first race at Phillip Island. Plus, with the changed suspension on the CBR, it was an uphill season.”

How did you feel on the bike?

“We only found a good setup in the Donington Park race. For the rest of the season I did what I could with the Honda, but I wasn't able to win and I only finished on the podium a few times.”

Now you are with MV Agusta, a prestigious brand...

“Yes, some incredible people have raced with this bike: Mike Hailwood, Giacomo Agostini and Phil Read have won with the MV brand all over the world. It's an honour to race for them. Last year we tried to hammer out a contract, but it was postponed about 12 months. For now, I am the only rider on the team and that is a good condition for me, but I would be happy to have a teammate to share data with and help solve the bike's problems.” 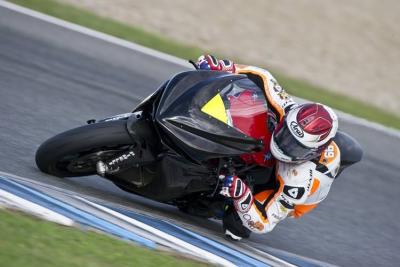 Did you notice any differences between the MV and the Kawasakis and Hondas that you have ridden?

“Yes, there are a lot of differences. For example, with the Honda CBR, I seemed out of control because it couldn't be ridden in a linear way. It's just a characteristic of that bike. With the F3 675 you have to be very clean. You have to make it fly into the turns and coming into corners the bike is incredible. I love making the tyres slide and with the MV it is more difficult, but to be honest, I would prefer riding clean and linear. I think the most effective riding style in paved track racing is round and smooth. I can adapt to the characteristics of any bike.”

“Of course, because I want to be ready for the tests in January. It's hard to stay outside here with this cold, so I train in the gym. I'll go to Florida for a week to get ready before leaving for Australia.”

Can Sofuoglu be beaten?

“Kenan has won 5 Supersport titles and it is hard to beat him. As for me, I don't want to put myself under any pressure. What I want is to win more than two races and try to take the championship. Succeeding would be incredible.”

Do you have SBK or MotoGP ambitions?

“My goal is to get into Superbike to try for the title with a package made up of a top level bike, team and assistance. I don't want to make second shelf choices. For now I prefer to do really well in Supersport.”

Some rumours had you in Moto2 next year...

“Sure, I went to Brno to talk to various teams. I had a couple of offers on the table, the most interesting one from team Leopard: Kiefer wanted me on his team and he gave me a letter of intent, which I signed. A while later, he called me to tell me that he had signed another rider. I was pretty excited about going to Moto2, so I was really disappointed".

You and Hayden are the only Americans in a world championship...

“Yes. The teams in Grand Prix Motorcycle Racing and SBK are European and they prefer riders from their own countries, without giving Americans a chance because they don't know their value and the speed they have in MotoAmerica. I know fast riders like Cameron Beaubier and DJ Beach who stay in the USA because they earn a lot of money from importers like Yamaha and other brands. As long as it stays like this, Americans will not come to race in Europe.”

Did Nicky help you?

“Nicky and I became friends during the season. He was really focused on his new experience in SBK, but he helped solve a few problems when they came up. His experience in MotoGP is huge. We had fun together. We joked around a lot and we get along quite well. He gave me a lot of advice on what to do on the bike on certain circuits and I think Nicky is an outstanding person. Hayden is a role model for me.”