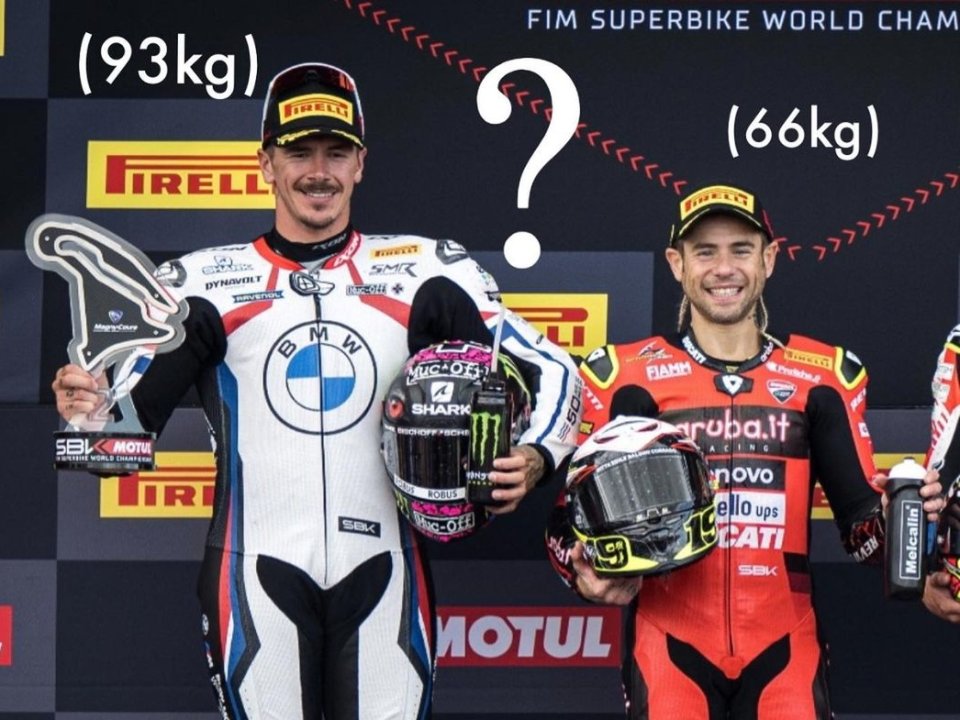 Alvaro Bautista's return to Ducati has brought back the issue of minimum weight in SBK, which has become one of the hot topics of the season thanks to Scott Redding. “Bautista has an impressive advantage on the straight and I don't think this is right. In my opinion Toprak has more talent, but on the straight he loses a lot and it is not right for him to be penalized in this way, as well as Johnny", the Briton told us on the eve of the Donington Park Round, pointing the finger at the benefits that the Spaniard has in acceleration from his physical constitution, being one of the smallest and lightest riders on the grid.

Harsh criticism that led SBK to evaluate the introduction of a minimum bike + rider weight starting from 2024. Too late according to Redding who, after fighting with Bautista in San Juan Villicum, went back again to pleading his cause, asking for an immediate intervention to stem the supremacy of the Spaniard.

“Should there be a rider minimum weight limit in 2023? World SBK has done a great job at creating some of the best motorcycle racing in the world, but why isn't there a minimum weight limit for riders? I can speak on this subject as I am not a championship contender this year, those who are will not speak about it because they are criticized by fans and social media 'experts' - wrote Redding on Instagram, posting videos accompanying his thoughts – As you will see when you swipe through the videos you will see the clear advantage that an extremely smaller rider will gain on a straight, typically 0.2-0.4 of a second, this may not seem a lot to many, but when 10 riders are covered by one second, this "0.2" on one straight is a beautiful safety net. By side of the speed gain, a lighter rider will not consume as much rubber off the tyre as a heavier rider. Therefore, at the end of the race, which is more critical, the lighter riders will likely have more grip compared to his competitors meaning more chance of winning”.

It’s an affirmation that Redding continues by examining the data from Argentina, to corroborate his thesis.

"I know information on tyre wear numbers, but this is confidential info. If you look at the San Juan sectors, you will see that there is a clear advantage in sector 2, which consists of two corners and three-quarters of the back straight. This means that the other rider has to push over the limit to try to recover the two tenths lost on the straight. I just think that it should be as fair as possible for all the riders. I will probably get a lot of hate comments, but that's fine because someone needs to speak up - concluded Scott - There is already a minimum weight limit for the bike. I don't want the riders to be like me because they need a truck on their back, but they are average”.

It’s a subject that finds the support of the "giant" Loriz Baz, the tallest rider on the grid with his 192 cm by 95 kg.

“I agree 200%. Weighing 95 kg for me it has been like this all my life. The problem is that bikes get better and better with electronics and aerodynamics. This means that the small advantage we can have from weight is reduced every time new strategies are adopted - explains the BMW rider - I remember the Stock 1000 races and the first years in WSBK where I was able to wheelie or have grip even with my height and my weight. But the electronics and aerodynamics are getting better and better, and being heavy is just a big disadvantage on the straight! "

On the other hand, Alvaro Bautista does not think so, and after feeling himself called into question, responds in kind to Redding's accusations: "Why don't we also limit strength ... the small riders have less strength to move the bike and ride in corners, but this is not a problem for the bigger riders and almost bodybuilders. So if a limit is set for one thing, another must be set for another. I think it's more important to focus on harnessing your strengths and trying to minimize your weaknesses, but it's easier to find excuses than to work hard and accept reality. It is the first time in my career that riders complain about the weight of others”.

The final word on the question comes from Michael Ruben Rinaldi with a laconic “Where’s my popcorn?”, Which makes us reflect on the fact that the controversy seems destined to continue until the intervention of Dorna.