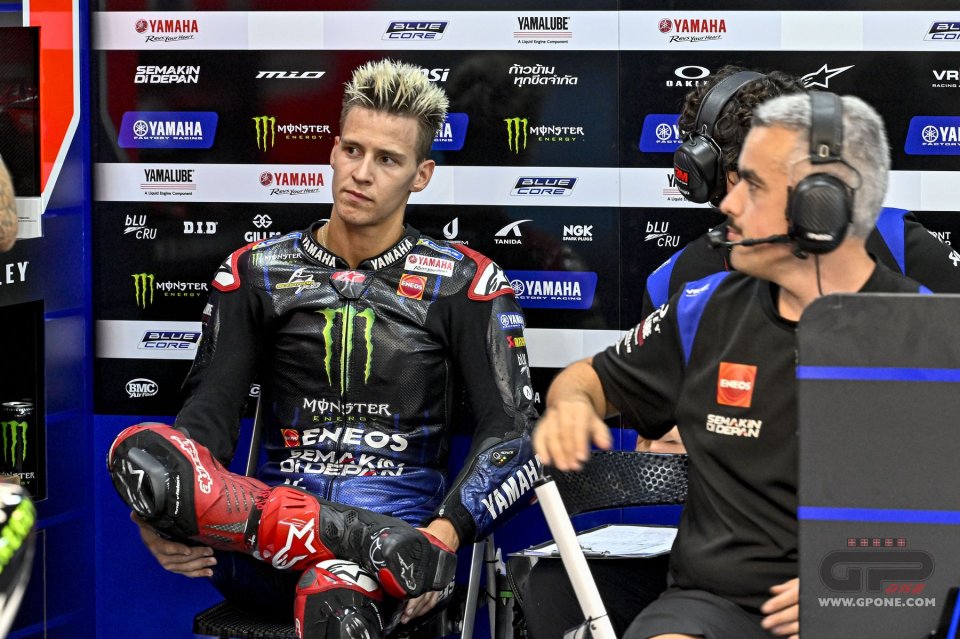 Ending a race in eighth position when you are points leader can also mean losing ground in the championship standings. But that's not what happened to Fabio Quartararo, who after an unfortunate race at Aragon was in part recompensed for the points lost by good fortune. Today the Frenchman was not incisive in the race, but things went much worse for the two rivals in the run-in for the title, namely Bagnaia and Espargarò.

The former crashed on the last lap in an attempt to pass Fabio, while Aleix was the victim of a technical problem with his bike during the warm-up lap and had to start the race from the pitlane on the second bike, finishing only in 16th position. Fabio's eighth place allowed him to recover points in the standings over his rivals, but the Frenchman struggled to see the glass half full at the end of the race.

"Given the circumstances I would say that it was better to gain points than to lose them - commented Fabio - It's fine from a certain point of view but it's frustrating from another because I feel that our potential was not in line with the best, at least not with Jack, who today was on another level. But today I think it was possible to fight with Marc and Miguel. But I can't overtake, I stay behind the other riders and I realize that I ride in a totally different way from everyone else. I made up a lot of time in sectors two and three, but then I lost just as much in the first and fourth. It's frustrating, I wish I could have been faster. I think we made a mistake changing tyres for the race and that's what made my pace so slow. "

Did you have any problems with managing the tyre pressure?

"By now we know very well how to manage the pressure of the front tyre in the race, in fact I could brake hard. But we made a small change before the race and we thought it wouldn't change the behaviour of the bike that much, but it actually did. A little error on our part, then we could have made a better choice of tyre. But we had lapped very little in the dry and we didn't give the hard a chance. This was a mistake. "

So following Vinales for a long time was not a problem.

"Both the team and I understand how to choose the front tyre pressure. When we start from the front I know we have to choose a certain pressure, while when we are behind many riders on the grid the tyre increases the pressure and we have to adjust differently. Today we did a good job from this point of view ".

Bagnaia nearly took you out with his crash.

"I heard his crash, but I didn't see it. But I think he wasn't that far from me. Of course I realised that he had crashed, but at that moment he was faster, he had made the right tyre choice and was doing a good job. I saw that he was catching up at the end. Maverick who was in front of me had a good pace, but I was stuck behind him for the whole race and that made things more difficult. "

There wasn’t much overtaking today, did you expect that?

"Overtaking here was very difficult. The tyre dropped but it did it for everyone. In the end we were all with finished tyres, and the best point for overtaking was turn 7. Only that you get there after an acceleration where if you have finished your tyres you don’t go ahead, in fact I don’t think I saw any overtaking there. I was behind the big group, but it was strange not to see overtaking at that point. I spent the whole race behind Maverick and I could not even risk trying to pass him. It was really sad for me, a race with not much fun."

Quartararo: "Whatever happens, we will all have fun on Sunday evening"

Quartararo: "Victory is the only option left, I have nothing to lose"