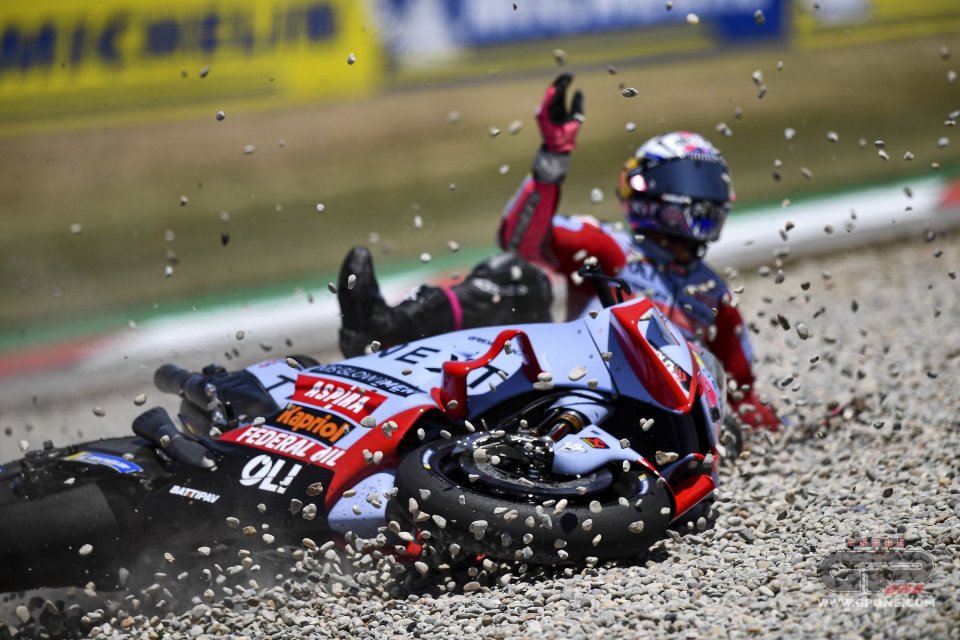 Another missed opportunity for Enea Bastianini, who ended up in the gravel on the eighth lap on the Montmelò circuit. The Italian talent suffered a further setback despite the fact that the situation in the standings has not undergone any dramatic changes due to the numerous crashes today. With his 94 points, and the only rider to have achieved three victories this season, the Gresini team man remains third in the standings behind Aleix, while Quartararo seems to have regained consistency and has increased his margin at the top of the standings.

"It was my classic weekend in which things didn’t go the right way - declared Enea - since yesterday in qualifying I wasn’t able to be as effective as I would have liked, missing Q2 by a few thousandths. In the warm-up, however, I was fine. Something happened on the front in the race, it was as if I didn't have anything on the left, I was waiting for the right moment ".

Yet in the early stages of the race your pace was remarkable, did the track conditions change? Something to do with the tyre temperature?

"The temperature obviously changed, but that wasn't the problem. In the left corners the front was jumping, on the right it wasn’t. Something wasn't working under braking and I had chattering."

Could the contract situation have influenced this setback?

"Absolutely not, it doesn't affect me in any way. I don't know yet where I'll go next year but from that point of view, I'm calm. At Mugello I got carried away and exaggerated trying to go beyond my limits, I wanted to do another podium. Today I would have settled for the result, I was riding clean and without any particular errors, but I can't explain the crash beyond that problem at the front ".

The day went in the best way for Fabio, with your crash, Pecco’s crash due to the accident with Nakagami, Aleix’s mistake. Quartararo seems to have pulled away in the standings and we are only halfway through the season.

"Fabio has broken away, like last season. He is very consistent and I think only he can lose the championship at this point. What I want for me is simply to find the feeling with the bike and get back to doing well."

Did you see the Nakagami accident? What’s your idea about it?

"I saw something, but not clearly. In situations like this it's easy to get involved, it happened to me at Mugello. It's not easy to make judgments."

Do you think Nakagami should be penalized? Rins seems to have a broken wrist and is convinced that part of the fault lies with the stewards, who are unable to handle this type of situation.

"At this moment I don't feel like making judgments, as I didn’t clearly see the dynamics of the accident".

Back to the championship, despite the difficulties in the last two races, the situation in the standings has remained substantially unchanged. Fabio has pulled away with Aleix in pursuit, but you are still third. What are your expectations for Sachsenring?

"Fabio is making all the difference, his lead has increased considerably. At Sachsenring I would like to find the right feeling I had until a few races ago. Not that I didn't have it today, but we are not able to be consistent, too many ups and downs and it's a something to which we have to find a solution ".