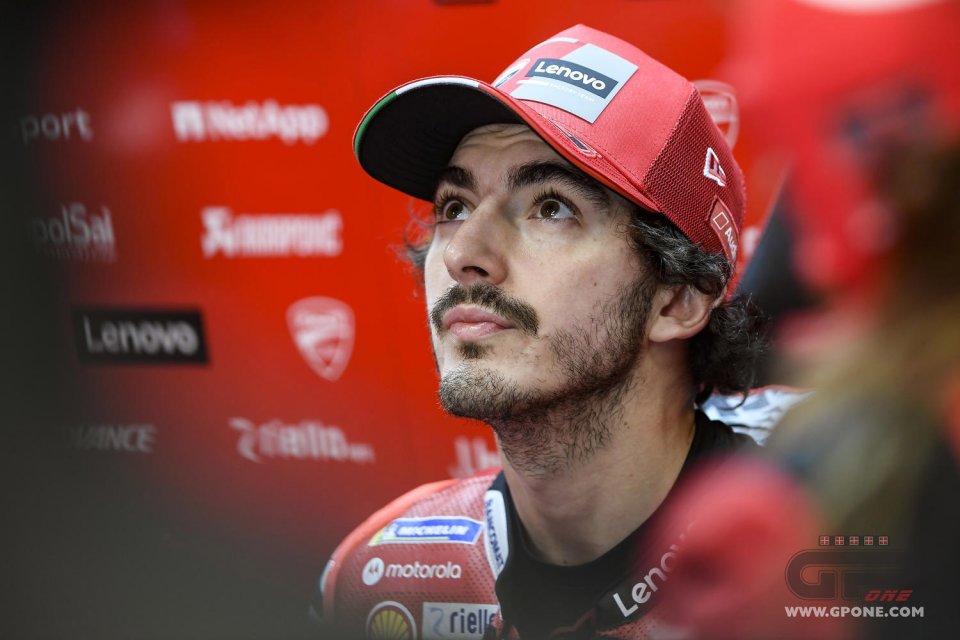 A big shattered dream. This is what the Misano race represents for Pecco Bagnaia, who until the moment of the crash had been simply perfect. He took pole and then put together a spectacular race until the moment he made a mistake that handed the title to Fabio Quartararo. The Frenchman would probably have won in Portimao or Valencia, but it would have been nice for Bagnaia to keep the outcome open right until the very end.

2021 however cannot be considered a disappointing year for Pecco, who picked up wins and pole positions, often proving to be the only true rival in the title fight against Fabio Quartararo. This season must be considered as a starting point towards the future, with a desire to bring the title back to Borgo Panigale after a fast that has lasted too long and clashes with the massive improvement that the Desmosedici has been showing in recent seasons. The Bagnaia who showed up at the meeting with the journalists after the race did not look disappointed or angry, but rather aware of having given everything to the end.

"I had this chance and I tried to the end - explained Pecco - I gave everything pushing as hard as possible in every lap until the end. I chose the hard front and this was the only chance, but I always had to push very hard to prevent the tyre from cooling down. I'm happy with what I did, although obviously I'm a bit frustrated with the result. Maybe I deserved something more but that's okay. I think at least I have a good base for 2022. Fabio was certainly the rider who deserved this title most of all, so I'm happy for him. Last year he was in my situation, he was fighting for the title and he made some mistakes. I think that next year I will arrive more prepared ".

Today the track was split in half in the stands between Rossi's fans and yours. Was that exciting for you?

"It was wonderful to see so many fans in the stands with flags with #63. I thank them from my heart, it's something that drives me crazy. It was incredible to hear them shouting my name from the stands and even when I crashed I heard everyone calling me, cheering me on. I would have liked to win for them and I'm sorry, but I can say it was very exciting ".

Was your error due to a drop in concentration?

“For sure it was not because I lost concentration. I was pushing – today was winning or gravel, and I tried all to achieve this win. The tyre chosen was the right one, the medium wouldn't work. I pushed hard from the first lap, maybe on the lap I crashed I braked a bit later and crashed. We worked hard, the race pace was even better than the last race at Misano. I'm frustrated, but I'm also happy to show that I can fight at the top. "

Were you afraid of a possible final attack by Marquez?

"I didn't think too much about Marquez, because I knew that in the last laps he would be struggling with the soft he had chosen. I just tried to impose my pace and be consistent, I was sure that in the final laps I would have an advantage over him. Of course, the pressure was there but not like in Aragon or even like here in Misano with Fabio the other time. "

How do you rate your World Championship in general?

"Last year I finished 16th in the world championship and except for two races I was far away. This year was not supposed to be the year to win but to learn, but everything was easier for me and we did a good job. I'm happy because I am finishing in second position, so I don't feel angry about losing this title, because winning it was not really our goal. I have learned so much in the last few races, I have always been able to fight for the win and this is a great step forward compared to where we were at the beginning of the season. I think we lost the world championship in Mugello when I crashed. Then also in Austria when I got the tyre that didn't work, which also happened to me at Silverstone. I lost the world championship in these three days. But it's not correct to think like this, I just lost. Now it's time to learn and improve in 2022. I am sure that I will arrive more prepared for the next challenge ".

Do you think Ducati is the best bike on the track today?

"Everyone thinks that Ducati is the best, fastest and most competitive bike. But the fact is that a Yamaha won the world championship. We really worked a lot, for sure our bike is very fast, but we have a lot of work to do for the future. The step forward this year has been clear and for next year I think our bike can become the bike to beat. "

For you when was the real step forward that led you to have the role of title contender?

"I divide the world championship into two phases, which was that of learning until the summer break and then the following one, in which everything was easier for me. I found a base to work on that worked perfectly. There were two races in which the tyres did not work well, despite being among the fastest I took home only 5 points. I was perfect on many tracks, I was perfect here too but then I made a mistake. I had to win and I tried. I can only say that to be happy. I’m frustrated for sure, but happy".

What do you think the 2022 World Championship will be like?

"It is difficult to imagine the scenarios for next year, also because this season is not over yet. I know that we have laid a big foundation for 2022. I know I have learned a lot in the last few races, and I will put it into practice in the future. The awareness I reached this season, makes me want to make 2022 become a world championship that goes in my direction. Quartararo, Mir and Marquez will be very fast, but I will try to do my part. I knew it would be difficult to keep the world championship open after Misano, but I wanted to try. But I have nothing to complain about, this world championship has always been in Fabio's hands ".