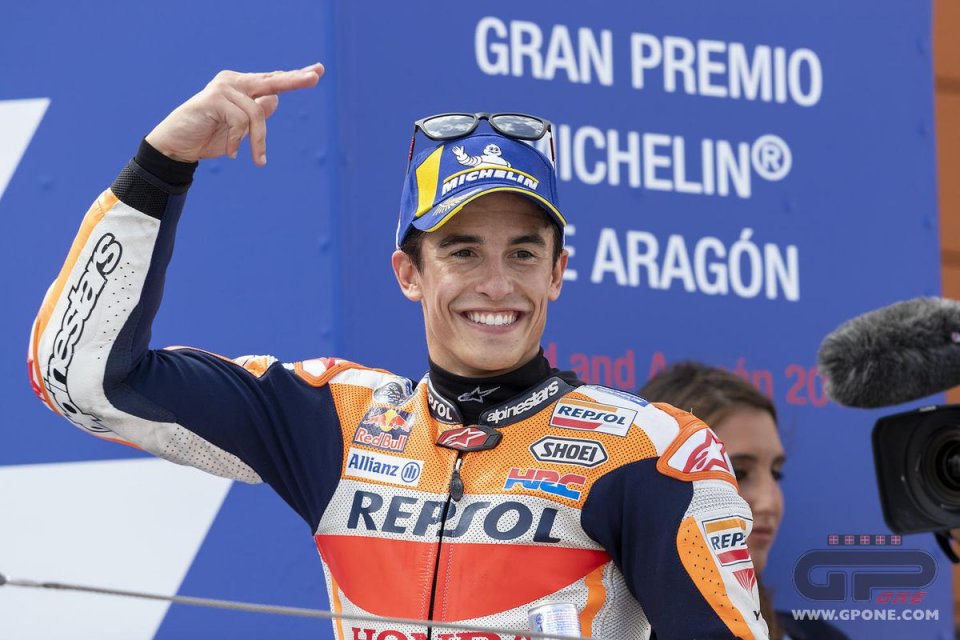 It is not a question of political tendencies, but it is clear that Marc Marquez is a man who is a bit of a leftie. The numbers speak for themselves, because on the tracks that mainly have curves on that side, Marc has a truly enviable record that sees him excel 70% of the time. Since he returned to the track in Portimao in 2021, the first track with a layout of this type was the Sachsenring, where the Spanish champion returned to the top slot of the podium.

Now comes Aragon, which in addition to being in Spain and therefore in a certain way Marc's home track, represents the second virtual set point for a rider who while chasing the podium all too often runs into almost unforgivable mistakes. He had a good chance in Austria, but the crash in the wet after changing tires eliminated him from the scene ahead of time.

Marquez and those too many mistakes

At Silverstone he seemed in good shape, but the overly optimistic entry move on Jorge Martin took both of them out and, above all, aroused some controversy regarding his race conduct. The point is that Marquez is not and will never be a rider who is satisfied and however much he may say he feels different and has to accept this change, the impression is that once in the race Marc forgets these words. He wants to win, he wants to beat everyone and prove to himself and others that he is still the true master of MotoGP, someone who has ‘only’ been slowed down in this period of his career by a physical problem that he will solve sooner or later. However, the months are going by and the situation is getting complicated, thanks to a Honda that is no longer a bike made-to-measure on the Spaniard which until 2019 had allowed him to dominate, leaving only the crumbs to the others.

Aragon, however, might be different, it can really be the starting point of a recovery that everyone needs in this MotoGP that is heading towards the end of its 2021 season. Fabio Quartararo is powering his way towards a world championship victory that appears less and less in question, as the closest of his rivals in the standings is Joan Mir today 65 points behind. This is almost three Grands Prix ahead of the Frenchman and currently there is no one who seems able to worry him even in the future.

To beat Quartararo in 2022 you need the best Marquez

To beat a Quartararo in a state of grace, we probably need the best Marquez and today this rider is simply not present. He crashes often, too often and when he doesn't crash he struggles with a Honda that doesn't go well with the latest Michelins. In 2022 Valentino Rossi will no longer be on the track and although his results have not been the same in recent seasons, Valentino has in any case been a huge attraction for MotoGP.

We need to have a 100% Marc Marquez once again to try to counter Quartararo in the future and build up a rivalry that has only been expressed on the track a few times up to now. The duel between the two is lacking, that confrontation up to the last corner that we experienced a few times only in 2019. But at the time the Frenchman was a MotoGP rookie, while today he is the true phenomenon of the category, a role which seemed to belong to Marquez for many more years, but Jerez changed everything in 2020.

Reversing the course at Aragon will be fundamental for Marc, who will have to make the most of his expertise on left-hand tracks to get back on the top step of the podium and gain a new confidence in his own means that he has certainly been lacking in recent months. If we look at the statistics, the numbers are on his side. Now it's up to him alone to experience a weekend as protagonist and perhaps not to overdo his aggression in the race in the first crucial stages of the Grand Prix.