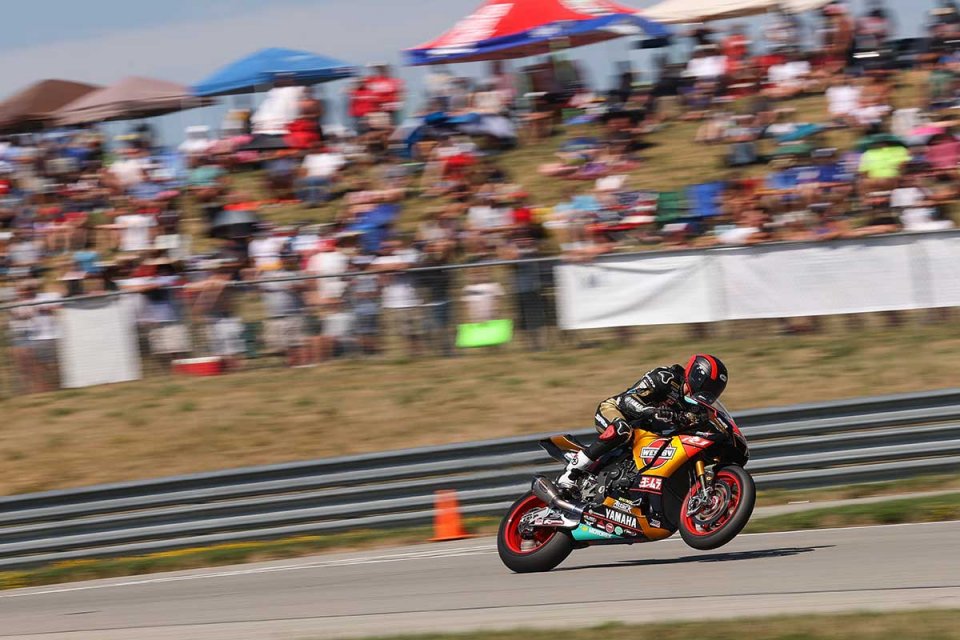 Plain and simple. Jake Gagne is on a roll and has looked unstoppable in winning a record-setting 11 MotoAmerica HONOS Superbike races in a row. But with another race comes renewed hope for his rivals. Maybe, just maybe, this is their week.

The MotoAmerica paddock heads to Pennsylvania, August 13-15, for one of the more popular stops on the calendar - round seven: Pittsburgh International Race Complex – and everyone rolls out on track on Friday morning hoping to have the answer to the biggest question of 2021. Can anyone stop Gagne and his Fresh N’ Lean Attack Performance Yamaha?

So far, the answer is no. And the more he wins, the more his confidence grows and the harder he is to beat. Case in point, the last round at Brainerd International Raceway. Gagne crashed in front of the HONOS Superbike pack on the opening lap and somehow neither he nor his motorcycle got struck by another rider. He was unscathed and so was his Yamaha YZF-R1. Meanwhile, 100 yards up the track and a few seconds later, Loris Baz slid off his Warhorse HSBK Racing Ducati New York Panigale V4 R, the bike hit the gravel trap, cartwheeled, and basically broke in half. Fast forward half an hour and Gagne was on his way to winning his 10th in a row while Baz watched from hot pit.

Gagne crashed and won on Saturday in Minnesota, and then went out and won again on Sunday for a record-setting 11th in a row. This coming weekend in Pennsylvania, the Californian will be trying for an even dozen.

With Gagne’s win streak comes a generous points lead of 79 over Westby Racing’s Mathew Scholtz, the only other rider to win a HONOS Superbike race in 2021. Since his win in the opening round when Gagne’s bike failed him, Scholtz has visited the podium seven more times, including his runner-up finish to Gagne in Sunday’s race at BIR a couple of weeks ago.

With two races left to be run at Pitt Race and three at both New Jersey Motorsports Park and Barber Motorsports Park to close the season, there’s still plenty to play for with 200 points on the table. But first things first: Someone has to stop the runaway train that is Gagne.

Scholtz, meanwhile, has a 35-point cushion on his South African countryman Cameron Petersen, the M4 ECSTAR Suzuki rider having a consistent season with four trips to the podium in 2021. Petersen, in turn, has 16 points on Gagne’s teammate Josh Herrin with the 2013 AMA Superbike Champion missing the last round after testing positive for COVID-19.

While the points leader is way out front and Scholtz looks sort of secure in second, the battle for points behind them is close with only 23 points separating Petersen in third from Baz in sixth, with Herrin and M4 ECSTAR Suzuki’s Bobby Fong separating the two.

Seventh is held by Scheibe Racing BMW’s Hector Barbera, with the Spaniard continuing to impress in his first season in the MotoAmerica Series.

The next three riders in the Superbike title chase are the three riders fighting to take home the $25,000 for winning the Superbike Cup, a class within a class for those racing their Stock 1000-spec motorcycles in the premier class. Altus Motorsports’ Jake Lewis is leading the way into Pitt Race, but he’s just seven points ahead of Travis Wyman Racing’s Travis Wyman and another seven clear of HONOS HVMC Racing’s Corey Alexander with that trio rounding out the top 10 in the Superbike Championship.