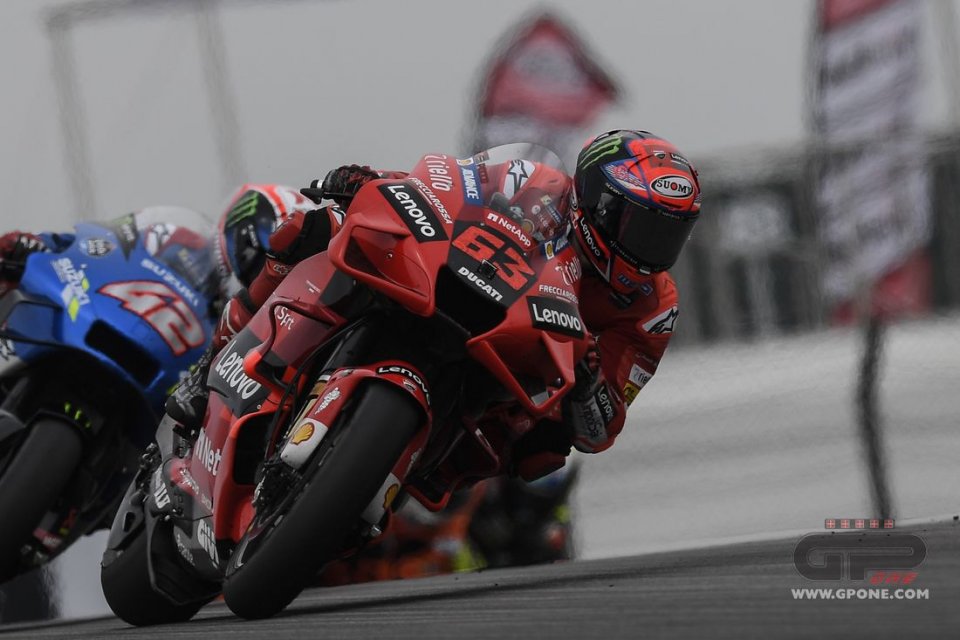 Bagnaia’s face says more than his words do. It’s needless to expect him to celebrate being the best Ducati rider at the Sachsenring finish line after a comeback that took him from 16th to 5th place: “It matters little if you don’t win. Pecco straightened out in the best way a Sunday that started badly, but he lost more points from Quartararo and he knows that.”

“I can’t see the glass half full. I’m on the factory team, and I can’t be happy to have finished fifth,”  he pointed. “I threw away another possibility when I had the chance to be on the podium. Many didn’t think I was favored, but I knew I had a pace similar to that of Marquez and Oliveira. I threw the race away in the early laps and lost points to Quartararo again, even if I recuperated from Miller and Zarco. I have to go back to being as fast as I was at Mugello, starting from Assen.”

What happened after the start?

“For the first six or seven laps, the rear tire slid in corner entry, something that never happened during the weekend, and we need to understand why. Once it started working, right when it started raining, I was able to push and recuperate. Then, when the others suffered a tire drop, I knew that my work would help me. I was able to be constant and keep a good pace. I overtook nine riders on a track where it’s difficult to do so. I’m happy with that. But it’s not possible to waste so much time at the beginning. Even if I had started later, it wouldn’t have changed much.”

Could Oliveira and Marquez be rivals for the title too?

“It’s nice to see four or five different very strong teams. Miguel is one of the most talented riders. He’s another who can fight for the championship, and Marc is back to winning. I haven’t gotten on the podium in four races. I have to get back on it quickly.”