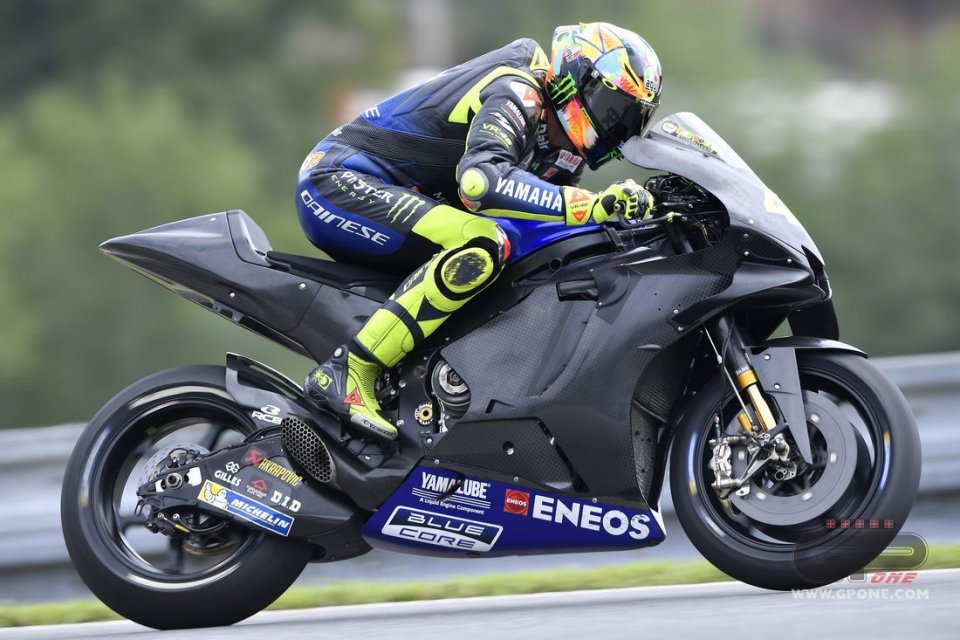 In the tests at Brno, all eyes were on the new Yamaha in its elegant carbon black suit. The M1 2020 prototype arrived in the Czech Republic from Japan. "Testing it here is already great, like the good old days," Valentino laughed.

But not all that glitters is gold because Rossi hoped to find a herd of horses waiting for him under the tank and not just some ponies at pasture. It's been a while that the riders have been asking Yamaha for a power injection because the M1 is constantly in the last positions at its maximum speed.

"I felt that it gives a little something, but it needs something more. Real horses," he joked, after he tried it for the first time. "I wasn't expecting anything in particular from this first time. This is not the day when we have to make a difference, but the new engine isn't that much stronger than the current one."

This means that the Japanese engineers cannot take a break but have to keep pushing on the accelerator. And not only metaphorically.

"I know that our rivals are working very hard, and today was just a first taste," continued Valentino. "Like I said, I didn't feel a big difference in terms of engine power, and we certainly need more. Anyhow, we'll have something new soon during the Misano tests at the end of the month, then in Valencia in November."

So you have to keep crossing your fingers and give as much information as possible.

"We even had a new seat and a new fairing. As usual, we're still trying to prevent the bike from rearing up," explained the Doctor. "I also made some changes to the setting and balance and there were positive but also negative results. But there's still a lot of work to do."

Rossi and his team did not however only work for next year but also for the upcoming races. The Doctor's 6th time (and the fact that all the Yamahas are in the first 6 places, with a hat-trick in command) would bode well. Except for the fact that, in just a few days, the next race will take place at the Red Bull Ring.

"On paper, it's definitely not one of the most favorable tracks for us," confirmed Valentino. "But we've done a lot of work on the M1's set-up today and we can use that. We found something good."

Vinales was also able to use the 2020 prototype, but he didn't seem very interested in the more remote future. The Spanish rider's priority is to rush to the top, from which he fell in Brno, and get some satisfaction out of the last few races.

"I tried the new M1 for a few laps and I was fast, which is always important, but I did it when the track had a lot of grip, so I can't say that much, and I don't know if the road we've taken is the right one ," he explained. "I honestly didn't focus much on that prototype. I'll have time in the end-of-month tests at Misano to do it."

Despite this, Maverick agrees with Valentino that the engine does not have the power they hoped for.

"It has a few more horses, but they're not many. After all, it's just a first prototype," he said.

Instead, he seems more optimistic for the immediate future.

"This was an important day for improvement, and I found a good path to follow," he said. "I'll be arriving in Austria very motivated, but I know it'll be a difficult track for us, and any result will be good."