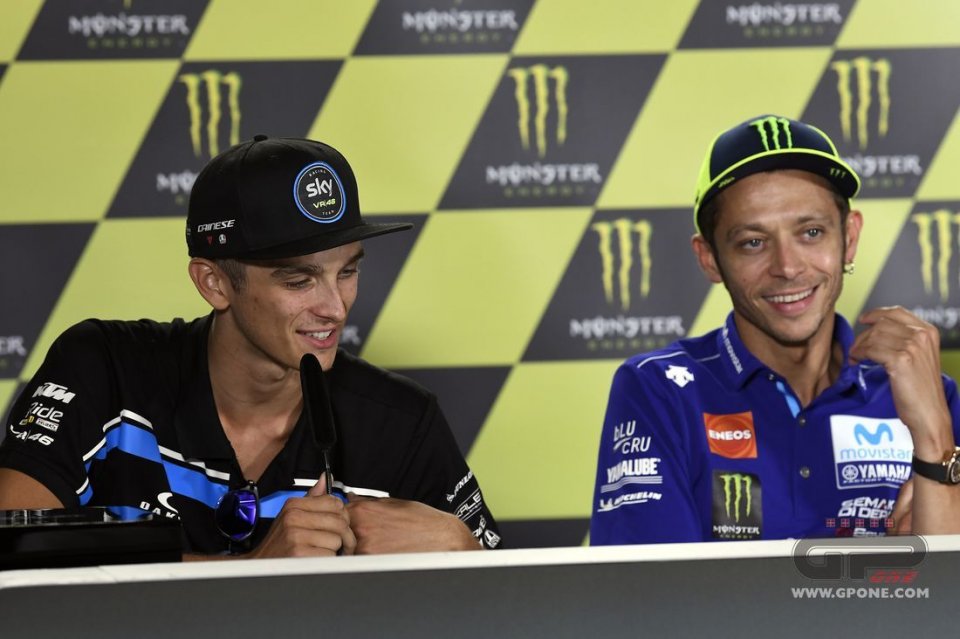 Brno is a special track for Valentino. It is where he earned his first pole position, first win and first world title of his career. As of today, the track will be even more important for him after Luca Marini’s first pole position. The Doctor did not try to hide his emotions and he seemed almost to be happier for his brother’s result than he was for his own front row.

“It is undoubtedly a great moment for our family and for our mum - the Doctor smiled - I have many reasons for being happy. I am happy for Luca, who has taken a huge step forward in the last three races, and also for my team.”

It is impossible not to draw the parallel with your first pole position …
“He is already in Moto2 and he is 20 years old like I was when I took my first in 250, so I would say that he is in line with me. He has time to have a great career (laughs). He did great in qualifying, but the important things for him will be to ride a good race to demonstrate that the Sachsenring podium was not a fluke. I hope he can repeat the performance tomorrow.”

You also finished on the podium in Germany…
“But I think that for the race tomorrow Luca is in a better position than I am (laughs). The problem is that I don’t have a great pace. I am having trouble and if we were to race right now I would have a very hard time.”

In any case, starting from the front row is an advantage.
“I knew that I was fast with the new tyres and I gave it everything. I pushed to the limit without making mistakes. When you don’t have a fantastic pace, the front row is even more important. I’ll be with Dovizioso and Márquez: the best in terms of pace.”

What is your level?
“I looked at the data and I am really going slowly. The risk is to have to ride a race on the defensive.”

Dovizioso said that it is hard to make comparisons with the other riders because in FP4 some started with new tyres and some with used. Do you agree?
“That argument is valid for him because he had used tyres. Mine were new and I was slow (laughs). It is also true that I used the hard front tyre which I do not like at all.”

And with the hard rear?
“I go constantly slowly (laughs).”

Could you risk the soft in the race?
“I don’t like taking gambles. Maybe you could use it if the temperatures drop.”

What work needs to be done from now to tomorrow?
“Certainly not turning the bike upside-down. You only do that when you are in a really bad position and, from my experience, it often does not do much good. This is the time for what we call ‘fine tuning’: sorting the final details. Then, above all, we’ll have to figure out which tyres to use.”

Will you suffer more watching your brother’s race or riding yours?
“You suffer more being a spectator of someone else’s race, especially when it’s Luca. When you are on the bike, you don’t have time to think.”

You seem confident anyway that you will be able to patch things up along with your team. On the other hand, the other side of the garage seems to have a very tense climate…
“I don’t know what is happening, but it is difficult to create a good atmosphere when you know that you’ll be parting ways at the end of the year. Both Forcada and Viñales are two professionals, so I am sure they will give it their all right down to the last race of the season.”